The Acer Aspire AXC-705-UR53 is a capable, compact and attractive budget desktop PC, that blends stable performance and affordability of a system meant for home, small office or college use.

Lately, the desktop PC market has plenty of systems that can be had for much less that we’d have imagined a few years back, but they do offer plenty of capability for the Facebook and Pinterest fan base, the college kid, and the basic home/office user. The Acer Aspire AXC-705-UR53 desktop suffices as one of the affordable systems ideal for the home/office or even a college room.

In addition to the affordability, the system comes in as compact, thanks to a small form-factor (SFF) design that will most definitely fit anywhere. While the Aspire 705 doesn’t give you the same bang for the buck as with the ASUS M32CD, our top pick for budget desktop PCs, it’s still a strong contender thanks to a good set of components and features that will keep most basic users satisfied.

The Acer Aspire AXC-705-UR53 measures 10.6 by 3.9 by 14.4 inches (HWD), which is exactly the same dimensions as its other stablemate the Acer Aspire XC desktop. While it is way larger than tiny PCs like the Dell Inspiron i3050-3000BLK, it’s still a good deal smaller than full-sized desktops, like the Dell Inspiron 3847. It is clad in a simple sheet-metal construction with a stylish front panel, with tapered vent-like accents on the left while the front finish mimics the look of brushed metal. The desktop PC comes bundled with a wired keyboard and mouse.

Slide open the side of the small tower, and you’ll find that the system is equipped with an Intel Core i3-4170 processor, 4GB of RAM, and a 1TB, 7,200rpm SATA hard drive. Here you get a few expandinbility options in way of a few open slots for adding components including PCIe slots and a single Mini PCIe slot—but there’s not a lot of room physically, and the system’s power supply doesn’t give enough space for expandability safe for what’s already included in the case.

You could, however, punch up a Wi-Fi card, or even expand the system’s memory incase it starts to fel slow. The 1000GB hard drive is quite decent as it offers a ton of storage, and is enough basic users who aren’t likely to load it up with video files or games. The system comes with Windows 10 preinstalled, which can be viewed in dual monitor mode through VGA and HDMI capability.

At the top of the gently curved front panel is a power button and a silver ACER badge, while on the top of the recessed vertical left panel is a tray-loading optical drive (DVD±RW/CD-RW). The bottom hosts an SD card slot, two USB 3.0 ports, and jacks and headphones and a microphone. On the rear are an additional four USB 2.0 ports, an HDMI-out (that supports 5.1 surround sound) port, a VGA-out port which is ideal for dual monitor support and a Gigabit Ethernet port, as well as some audio connecors. Connectivity comes in the way of an Ethernet port, 802.11ac Wi-Fi and the system supports Bluetooth 4.0 for sharing media and documents with other devices such as smartphones within the room without the unnecessary wired clutter.

The 3.7GHz Intel Core i3-4170 CPU fitted in the system isn’t the latest and greatest —it debuted more than two years ago — but it does score where it matters and will definitely do the job, plus it helps tone down the price of the desktop. In fact, it is a 4th generation (Haswell) processor released in 2013, so it is relatively slower than the more recent Skylake (6th generation) processors released in August last year; we’ve seen them in most desktop PCs including the ASUS M32CD, ASUS M32AD and the Dell XPS x8900-631BLK desktops.

As should be expected, for the budget desktops category, the performance isn’t fantastic, but it’s adequate. The system is fairly faster than most Intel Celeron PCs like the Acer Aspire AXC-603-UB17, meaning that it will deliver on word processing, web surfing, light media editing at hobbyist level among other light home/college tasks. Its Intel HD Graphics 4400 card won’t deliver much, but basic titles with low candy are still playable. Apparently, this level of performance will be fine for perhaps the first year or two of ownership, but since it’s a little to start with, it might feel like it’s crawling along in a one or two years.

If performance (speedy performance for that matter) isn’t your main concern —and for many users, it isn’t— then the Acer Aspire AXC-705-UR53 desktop offers you a perfect blend of basic computing capability, compact design, and a reasonably affordable price. For the performance and affordability, it deserves a top spot in your shopping list, but the ASUS M32AD and the ASUS M32CD, our Editors’ Choice for budget desktops deserve an even longer look, thanks to the latest Skylake processors, better overall value and forward-looking features that will remain relevant for the next few years even as the desktop PC niche evolves with newer desktop PCs. 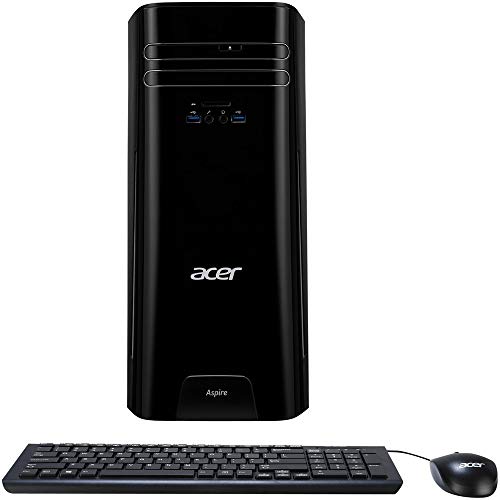