The Acer Aspire AZ3-715-UR61 is a capable All-in-One desktop PC, powerful enough for day-to-day computing needs. It does have a few flaws, like a slow hard drive and dated screen but it makes up with a dedicated GeForce 940M graphics card and good connectivity.

The Acer Aspire AZ3-715-UR61  is an entry-level all-in-one desktop with a 23.8-inch Full HD panel, enough storage space, and delivers good multimedia and day-to-day performance, thanks to a powerful Core i5 processor and 8GB of RAM and dedicated Nvidia GeForce 940M graphics card.  However, its slow-booting hard drive, dated design and lack of forward-thinking ports like USB-C or Thunderbolt 3 seem like serious tradeoffs–though not prohibitively so.

If you’re in business, the HP Envy 27-b110 All-in-One desktop presents a shoo-in for the creative departments, with its Full HD screen, powerful processor and graphics, excellent connectivity and a refreshed design that look like a standalone display. It remains our Editors’ Choice for business all-in-one (AIO) desktops.

The Aspire AZ3’s components are conveniently built into the back of a 23.8-inch In-Plane Switching (IPS) display. Measuring 18.4 by 23.3 by 1.4 inches (HWD), it is fairly larger than the 21.5-inch Apple iMac, but similar in height with most AIO desktops. The display is floated by a non-removable, bright silver-colored L-shaped stand, which mimics the stand on the latest Apple iMac. While the stand looks easy on the eyes and allows the display to tilt, it lacks height or swivel adjustments, but it does blend well with the silver-colored trim around the screen. Overall, the design looks attractive, though a bit dated.

The Full HD (1,920-by-1,080) resolution display delivers wide viewing angles, but if you look closely, you’ll see the individual square pixels. The grainy display makes text a bit blurred as compared to competitors like the Lenovo B50 (which also has a Full HD display). The pixel issue really becomes an issue when you’re viewing bundles of color that need to be smooth, like the solid red window when you first launch MS Office 365 app.

Still, it’s a usable panel for day-to-day use including web surfing, office documents, but a raw deal if you’re buying it for photo or video work. If you need an AIO PC that will suffice for media editing, you should look at something like the Apple iMac 27-Inch which has a clear display with no blockiness.

The system comes with a wireless keyboard and mouse –both use a USB RF adapter rather than Bluetooth, which helps keep the unnecessary desktop clutter under control. The mouse is a standard optical pointer, and the keyboard is mushy which is standard for the entry-level AIO models. There is a full HD webcam centered above the screen, which comes handy for video chats and Skype.

On the left side, you have a recessed array of I/O ports, including a headset jack, an SD card reader, a pair of USB 3.0 ports, alongside a button to switch screen inputs. Around the back, you have two more USB 3.0 ports (for a total of four), a USB 2.0 port (for the RF adapter), an Ethernet port, an HDMI-in jack, and an HDMI-out jack. Notably absent are USB-C or Thunderbolt 3 ports, that would be used for data transfer from many modern SSDs. Wireless connectivity comes via 802.11c Wi-Fi and Bluetooth 4.

The Aspire AZ3 comes with Windows 10, 8GB of RAM, a 1-terabyte 5,400RPM SATA hard drive, and an 8X DVD-writing optical drive. It’s surprising to see a DVD drive at a time when everything can be downloaded from the web, but understandably, folks have large DVD movie collections. The memory is decent enough for extreme multitasking, as you can, let’s say, open a dozen browser tabs, edit a few photos, while playing music in the background. Apparently, most systems in this price range, like the Apple iMac come with the same 8GB of system memory.

The 1TB hard drive is sufficient enough. While it offers tons of storage, the hard drive is painfully slow, especially compared with the new breed of speedy SSDs found in desktops like the ThinkCentre X1. With an SSD, a desktop is able to boot up in about 5 to 10 seconds, but with the mechanical drive the Aspire will need about 45 seconds, and programs will also take an eternity to load. It is understandable that Acer took the hard drive path in order to keep costs down, but systems like the HP Envy All-in-One (27-b010) offer the best of both worlds, with a 128GB boot SSDs for snappy loading, and a 1TB data drive for extra storage. And you don’t have the option to upgrade the SSD.

The Aspire 715’s seventh-generation a Skylake Intel Core i5-6400T and dedicated Nvidia GeForce 940M graphics card combine to give the desktop solid performance overall. The sixth-generation processor clocks 2.2GHz, but can hit 2.8GHz in turbo mode, which is just enough muscle to do some basic-medium multitasking without stuttering. Plus, it comes with Windows 10 Home (64-bit), a stable CPU and enough RAM that make it ideal for day-to-day computing. Essentially, you will be fine using the Aspire for at least the next five years for day-to-day tasks like editing in office apps, video conferencing, and web browsing.

In fact, it will give you better performance than Intel-equipped systems like the Dell Inspiron Small Desktop 3000 Series. As expected, you will be doing some gaming with the dedicated GeForce 940M graphics card. Its 3D gaming score is lackluster compared with dedicated gaming PCs but you should be able to play games like Minecraft smoothly at lower resolution.

If you need more than that, you’ll have to look upwards for a real gaming rig with a discrete graphics card, presumably the budget CYBERPOWERPC Gamer Xtreme VR GXiVR8020A2  gaming desktop.

Powerful, but With a Few Flaws

The Acer Aspire AZ3-715-UR61 is a capable all-in-one desktop PC, with features we all demand in daily-use system including lots of memory and computing power for, say, mathematical, business or scientific tasks. It has a few flaws that are, however, not easy to ignore including an aging design, lack of USB-C port, and a slow hard drive. If you’re on a tight budget and don’t need the most powerful system around, it does represent some-real-good value, and will remain relevant for a few more years. 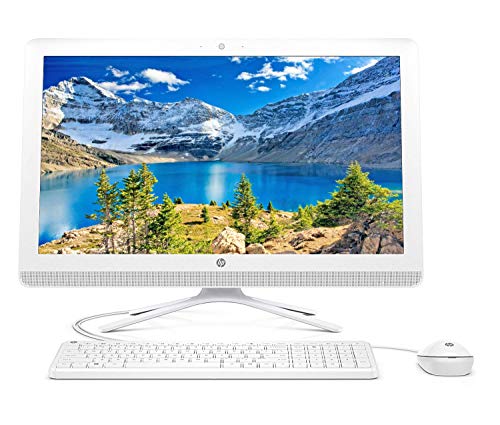