The Acer Aspire E 15 (E5-576-392H) is the true definition of a top-value system that offers the best features and components at a low price. It is around the same price as the Acer Aspire E15 from last year, but performs better, has more memory.

Shopping for a budget laptop isn’t always about making sacrifices in design and performance. Sometimes, it’s all about finding a point where the best features and components merge with the lowest price. Right now, the Acer Aspire E 15 (E5-576-392H) checks all those boxes, offering a full HD display, tons of storage, useful connectivity and all-day battery life. Of course, there are cheaper alternatives in the market, especially if you’re looking to save a few dollars for a college laptop, but you might have to compromise on either design or performance, or even both.

Considering that this laptop is almost the same price as our previous top pick, the Acer Aspire E 15 (E5-575-33BM), and offers better performance, more RAM, the same full HD display and a newer eighth-generation processor, it is our newest Editors’ Choice for low-cost desktop replacement laptops.

The Aspire E5-576-392H, just like its predecessor, isn’t the fanciest system around, but it’s solidly built for a budget notebook. Its entire body is cut from plastic, with brushed patterns on the lid and keyboard deck to add some knack to an otherwise bland style. Measuring 1.19 by 15.02 by 10.2 inches (HWD) and weighing 5.12 pounds, it isn’t particularly portable –especially with the new crop of ultrabooks, but it’s reasonably thin and weighted for the category.

Compared, the Asus F556UA-AB32 is lighter and thinner at 0.9 inches and 5 pounds respectively, but it fails to impress on performance with its sixth-gen processor. If you’re concerned about lugging around a heavy notebook around, the Asus is a better choice, though the differences are minimal.

It has a 15.6-inch, 1,920-by-1,080 resolution screen, which should be the main reason you buy the system over any similarly priced laptop. Its angle viewing is a smidge narrower, if you’re a perfectionist, but the system’s LED backlit screen is certainly bright and clear enough for a viewing session among close friends. Granted, it won’t wow you with brightness or sharpness, but it’s not a mediocre picture like most budget 15-inch laptops.

The not-so-good build quality of the lid extends to the keyboard deck and touchpad but are in the realm of what you’d expect of a value system. Except for some flex in the keyboard deck, the rest of it is OK, with a sturdy feel and nice key travel distance. For the touchpad, it is responsive and looks easy on the eyes with a silver trim.

On the downside, the Acer Aspire E 15 (E5-575-33BM has a back-lit keyboard and, since the Acer Aspire E 15 (E5-576-392H) looks like an upgrade over last year’s model, I can’t gather why they dropped the backlit keyboard. Maybe…just maybe, Acer was after extending the system’s battery life, but it’s a painful sacrifice they made here. Nevertheless, the construction as a whole is sturdy enough, though, you should be aware that you aren’t getting an all-metal build in a value laptop.

Here you’ll find a variety of ports, which is excellent for an inexpensive system that’s meant to remain versatile. The left flank holds most of the ports, including a pair of USB 3.0 ports (one with power-off charging), a HDMI port, a VGA connector, Ethernet port and surprisingly a USB-C port. On the opposite side is another USB port, a headset jack and a DVD drive.

The front side hold an SD card slot, which comes handy for transferring files and extending the laptop’s storage. The system comes with a 1TB 5400RPM hard drive, which means you won’t need to extend the storage unless you have lots of files to store, but it’s convenient to have the option. This capacity is far much than you’d find in most budget Chromebooks, though.

There is an M.2 slot accessible via the bottom door might you find in necessary top throw in a solid-state drive. Other features include dual-band 802.11AC Wi-Fi (with MU-MIMO technology, a bonus for the price) and Bluetooth 4.1. The same access door on the bottom lets you swap the storage and RAM, meaning you can swap the 2GB RAM stick with a 4GB stick to have a total of 8GB.

This iteration of the Aspire E15 is powered by a 2.2 GHz (up to 3.4GHz) Intel Core i3-8130U processor, 6GB RAM and Intel UHD Graphics 620 graphics. The CPU is an eighth-generation power efficient chip designed for notebooks and Ultrabooks based on the Kaby Lake Refresh architecture (and not Coffee Lake). It replaces the Core i3-7130U and brings along better Turbo Boost and enhanced single thread performance. This configuration means that you’re getting efficient performance out of this value notebook.

On productivity, it gets better scores than the HP 15 and the Asus F556UA-AB32, both equipped with older chips. That said, it doesn’t match the speeds of Core i5 and i7 notebooks, obviously, as you get more core you’re crossing over to machines at whole different price tiers. You won’t make this your media project hub, but it’s the go-system for media consumption, surfing the web, word processing and related tasks.

If those are your primary needs, rest assured it will get the job done. Plus, the Intel UHD Graphics 620 graphics solution means 3D gaming is out the window, though you can score with less-demanding 2D games.

Battery life is always a strong point for basic laptops, and the latest energy-efficient Kaby Lake Refresh processor used on the Acer Aspire E 15 (E5-576-392H) makes it even better. They took away our favorite backlit keyboard, so we expected better battery performance. It lasted 10 hours 39 minutes on our battery rundown test, though Acer bills it at around 13 hours on a single charge.

That’s good enough to make it through an entire workday or a Netflix binge-watching session. This is way better that the 8 hours 56 minutes we got from the Acer Aspire E15 (E5-575G-53VG) and is almost double the Lenovo Edge 15’s 5 hours 39 minutes.

The Acer Aspire E 15 (E5-576-392H) must be what you have in mind when defining a top-value laptop, offering impeccable features and good components at a low price. It is around the same price as the Acer Aspire E15 from last year, but performs better, has more memory, the same superb display, and even has a longer-lasting battery.

It doesn’t have a backlit keyboard, which is something that may make some to consider last year’s Acer Aspire E 15 (E5-575-33BM), but it makes up with better performance and hardware. That said, on a feature set versus value basis, the Acer Aspire E 15 (E5-576-392H) offers the best combination of both, making it our top pick. 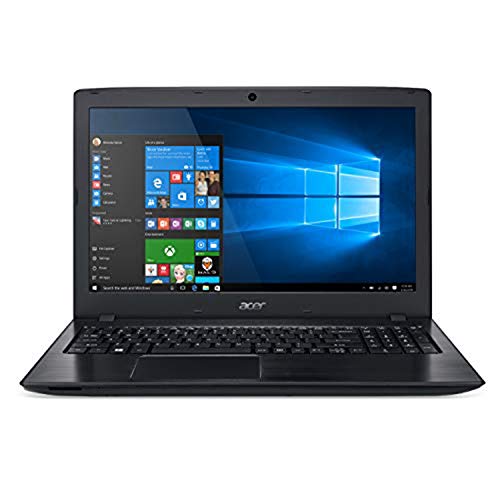