The Acer Aspire ES 15 (ES1-572-31KW) is a basic desktop-replacement laptop, with an above-average feature set and a good price, like a 2.3GHz sixth-generation (SKylake) Intel Core i3 processor, 4GB memory and 1TB hard drive storage. It is especially a good choice if you must have a full-fledged Windows PC instead of a Web-centric or tablet, but are on a somewhat tight budget.

It’s a good value but its not-so-good battery life and other nits, like a 720p LED display, ultimately hold it back from replacing the Asus VivoBook F510UA-AH55 as our Editors’ Top Pick for budget desktop-replacement laptops.

The ES1-572-31KW’s chassis is midnight black, with concentric circles running through the top lid and keyboard deck. It measures about 0.97 by 15.03 by 10.16 inches (HWD), and weighs 5.3 pounds. It’s certainly light enough to tote around in the house, but some might find it bulky to fit comfortably into a student backpack or airline tray table. It essentially shares the same chassis and weight with the Acer Aspire E 15, with the latter being slightly thicker at 1.19 inches.

The 15.6-inch screen has a 1,366-by-768 resolution, which is common for such a budget system, but the Aspire E 15 and VivoBook F510UA-AH55 boast full HD (1929-by-1080 resolutions) at around the same budget. As expected, viewing angles are narrower n the LED-display than those on an In-Plane Switching (IPS) panel, but the screen is clear and quite usable.

The ES1-572-31KW lacks a touchscreen, which isn’t a necessity in the pre-installed Windows 10 Home as it has been tweaked to work with touchpad inputs. Instead, you have a responsive one-piece multi-touch touchpad, that tracks well, placed centrally under the non-backlit keyboard-it is comfortable to use, even with the narrow keys. Sound from the speakers is clear, though somewhat soft.

The system has a mix of legacy and modern I/O ports. You’ll find a DVD drive, an Ethernet port, an HDMI port, a headset jack, a Kensington lock port, an SD card reader, two USB 2.0 ports, and one USB 3.0 port. The Ethernet port is handy if you don’t have a wireless router.

The system comes with 4GB of memory, which is the same as Aspire E15, though it is still upgradable to a maximum of 16GB, if need be. The 1000GB, 5,400rpm hard drive certainly offers more space than, say, a 64GB flash drive, but it’s slower that the latter, especially at system startup.

Components include a 2.3GHz Intel Core i3-6100U processor, the aforementioned 4GB DDR3L memory and an Integrated Intel HD Graphics 520 video card. The Intel Core i3-6100U is a late 2015-release, with a CPU Passmark score of 3509 points, which is among the low-end Skylake processors. Still, it suffices for anyone who needs a budget laptop for day-to-day tasks like office document editing, webcam conferencing, and Web browsing.

Its gaming scores are on the low side, so you’ll so you’ll probably want a faster system if you’re interested in games that are more challenging than, say, Angry Birds.

That said, the Asus VivoBook F510UA-AH55 is among the latest releases for 2018, featuring an eighth-generation Intel Core i5-8250U processor, 8GB memory and 128GB SSD+1TB HDD for storage. This feature set makes it a favorite among folks who need a notebook that will stay relevant for a few more years before it begins to feel tired.

Battery life on the Aspire ES 15 is average. It lasted 5 hours 39 minutes on our battery rundown tests, although Acer claims it can last 6 hours 30 minutes. This is quite acceptable for a desktop replacement as it is at par with the Lenovo Edge 15’s 5 hours 39 minutes, although the Aspire E15 outshines both of them at 9 hours 45 minutes. This is enough to last through a school day before having to be plugged in.

The Acer Aspire ES 15 (ES1-572-31KW) is a good budget desktop-replacement laptop, and is without a doubt a passable choice if you need to replace some older system and still keep compatibility with older programs and peripherals. Its 1TB hard drive and superb connectivity options are an advantage over most budget 15-inch laptops. However, the Asus VivoBook F510UA-AH55 remains our Editors’ Choice for budget desktop-replacement laptops, courtesy of an beefy eight-generation processor, an ambitious storage option and stellar overall performance. 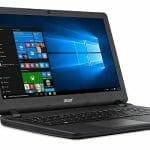