The Acer Aspire line of desktops fits budget PC components inside a compact case and adds some features that let it act as a value home-office companion. Our review model, Aspire TC-780-ACKI5, came with a seventh-generation processor, 12GB of memory, 2TB of storage and 64-bit Windows 10 Home, which make it a very strong day-to-day desktop.

It doesn’t quite pack a punch to make it a true living room PC, and the minimalist case design make upgrading like adding a dedicated graphics card difficult, but for the things it can do, the system performs well. If you’re shopping for a low-cost PC, you’ll be happy with this purchase, and a few extra features make it a better choice for the long haul.

If you have limited space on your office desk, the Aspire TC-780-ACKI5 might be what you’ve been looking for. Its mid-tower chassis measures 15.67 by 6.89 by 17.4 inches (HWD), weighs 18.4 pounds; meaning it can  fit  on most worktops with limited space. It inherits the black painted chassis with a hairline finish from its predecessor, with a top tray that comes handy when you need to charge or sync your smartphone from one of the USB 3.0 ports.

If you need to do a few upgrades here-and-there down the road, it has some real-estate that will allow for expansions. It has two memory slots, so you can expand the 12GB RAM to a maximum of 32GB if needed. However, that may not be necessary since the system works well out of the box with the installed 12GB, which I assume will be enough for most users. You also have two M.2 slots, a free PCIe x1 slot and an available PCIe x16 graphics card slot, but as you think of adding one, ensure that you choose a midrange or lower graphics.

The system uses a 300-watt power supply, which is fine for a budget desktop. Other expansion options include a single optical drive and a single hard drive bay, so you’ll have to choose between the two, as you have only one SATA port to service an additional drive. Included in the package is a wired keyboard and mouse, you’ll have to buy a monitor separately, we tested it with our Editors’ Choice the Acer R240HY and the picture output was impressive.

Connectivity is excellent for a budget system. On the front upper-deck there’s a tray-loading DVD burner, which is integral in case you need to rip some CDs or install programs from DVDs, though most installations can be done online.  You’ll also find two USB 3.1 ports, headphone and microphone jacks and an SD card reader on the top face of the system.

The backside has an audio line in/out port, an HDMI port, one USB 3.1 port and a VGA port for that old LCD you’ve always wanted to use. Internet connectivity comes via 802.11 ac Wi-Fi and Bluetooth 4.0, alongside a Gigabit Ethernet port.

There’s a spacious 2TB (7200RPM SATA3) hard drive, so you’ll have tons of storage space out of the box for your movies, downloads, videos and other files. This is double the storage we’ve seen in most budget desktops, including the Acer Aspire ATC-780-UR61 and ASUS M32CD, both of which come with 1TB hard drive storage. Recently, we’ve seen SSDs and hybrid drives trickle into the desktop category, but for a budget PC they’d only serve to bump the price, so we’re just safe with the traditional rotating hard drives.

Performance is a highlight here, thanks to the system’s seventh-generation (Kaby Lake micro-architecture) Intel Core i5-7400 processor, 12GB RAM and Intel HD 630 graphics. This is a notable bump from last year’s Acer Aspire TC (ATC-780-AMZi5 that was outfitted with a Skylake Intel Core i5-6400U and Intel 530 graphics. This processor clocks 3.0GHz, but can hit 3.5GHz in turbo mode, which is enough muscle to do some basic-medium multitasking without slowing down. Plus, it comes with Windows 10 Home (64-bit), a stable CPU and enough RAM that make it ideal for day-to-day computing. You will be fine using the Aspire for at least the next five years for day-to-day tasks like editing in office apps, video conferencing, and web browsing.

In fact, it will give you better performance than Intel-equipped systems like the Dell Inspiron Small Desktop 3000 Series. As expected, you won’t be doing much of gaming here, since the Intel HD 630 graphics card won’t deliver much. Its 3D gaming score is lackluster compared with dedicated gaming PCs but you should be able to play games like Minecraft smoothly at lower resolution. If you need more than that, you’ll have to look upwards for a real gaming rig with a discrete graphics card, presumably the budget CyberPowerPC Gamer GXIVR8020A4 Gaming Desktop.

A Capable PC for Home-Office Use

The Acer Aspire TC-780-ACKI5  is a perfect choice for a budget desktop, especially if you want the option to upgrade in your PC in the future. It lacks a dedicated graphics card, it doesn’t spit mind-blowing processing speeds, but you’re getting more computer than you’re paying for. It undercuts most of its competitors with tons of storage in the category, since you’re never getting 2TB in a budget system anywhere else.

To that, it adds Wi-Fi connectivity and a capable seventh generation processor with 12GB of system memory. On just about all the other factors, the newer iteration and its predecessor, they are effectively equals, and the Wi-Fi means that both can be used in any room in your home with a wireless signal. That flexibility, versatility and real-estate to grow into something bigger through upgrades earns the Acer Aspire TC-780-ACKI5 a spot among our Top Picks for budget desktop PCs.. 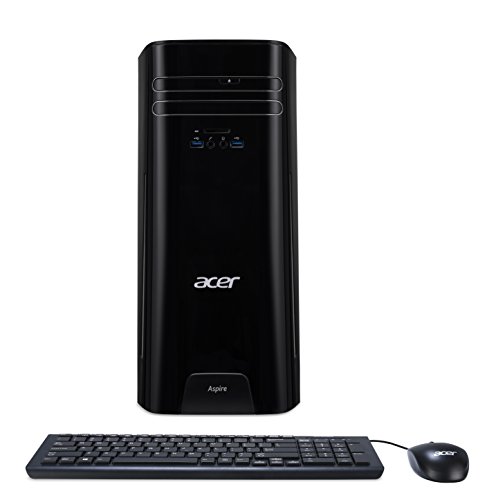