Our review unit, the Acer Aspire TC-865-UR14 is an affordable mainstream desktop PC that packs pretty much everything you’d need in a midrange home/office PC without breaking the bank, but doesn’t cut corners while doing so.

The mainstream desktop PC market has moved towards higher prices and potential to play modern games thanks to dedicated graphics cards and beefier CPUs, thanks to machines like HP’s Pavilion 690-0073w and the Dell G5. So, finding a truly affordable mainstream PC for everyday computing tasks is pretty difficult – sometimes, you’re forced to pay more for gaming features that you didn’t need upfront. The Acer Aspire TC-865-UR14 takes a pleasingly affordable approach instead.

This machine is quite affordable, and it’s designed to tackle mainstream home and office tasks with ease – and look presentable while doing it. That’s great, and we’re glad that not many corners have been cut to meet the affordable price. If you’re looking for a do-it-all desktop that can be had for less cash, there’s real value to be found here.

The Aspire TC-865 is housed in a midrange tower that measures 13.39 by 6.42 by 13.78 inches (HWD), making it slightly smaller than the Ryzen 7-powered Dell Inspiron i5676 that measures 18.08 by 8.5 by 17.23 inches (HWD). The chassis is fashioned from black painted steel, but unlike last year’s model, this one adds some flair to an otherwise boring design. It features a black front panel, with an Acer logo, a tray-loading DVD drive below the logo and a few easy access ports on the right side.

Overall, the new design looks great, is compact and manages to offer some real estate for future upgrades (PCIe x16, PCIe X1, one M.2 for SSD and one M.2 for WLAN/Bluetooth), but the system works well out-of-the-box even without the upgrades. One thing you’ll notice is that the Aspire TC-865-UR14 isn’t quite a small-form-factor (SFF) that are usually tiny like the Dell Inspiron 3470, which is a good thing if you plan on throwing in more storage and RAM later.

Port selection is excellent, at least for the price. On the front panel, there is a single USB 3.1 port, one USB port, an SD card reader and separate microphone and headphone jacks. The rear panel holds an additional pair of USB 3.1 ports, 4 USB 2.0 ports, two HDMI ports and a single VGA port. It even includes an optical drive that most manufacturers are simply dropping, since you can now get most services via the cloud, including Operating Systems and updates.

To connect to the internet, you can do with an available Ethernet port, while wireless connections come in way of 802.11ac Wi-Fi and Bluetooth 5.0. Also bundled into the package are a wired, Acer-branded keyboard and mouse. If you’ll be using the Aspire as an entertainment hub in the living room, the wired inputs can be limiting, something like, say, the Logitech MK270 wireless keyboard+mouse combo is more preferable.

The star of the show for this refresh of the Acer Aspire Series is, of course, the Intel Coffee Lake processor, the Core i5-9400 processor. This is an upgrade over its predecessor, meaning you’re getting a quad-core processor that’s now powerful enough for mainstream tasks, for less money.

Apart from a powerful CPU, the system packs 8GB memory and a 1TB hard drive for storage, but a solid-state drive (SSD) would have been great as it offers speed processing faster over traditional hard drives. For day-to-day use, the Acer Aspire TC-865 stacks well against the competition, as it should with one of the best entry-level processors in the bunch. Rest assured this desktop can be your home office PC and will be able to handle everyday tasks for years to come, and its storage is also snappy.

You’ll enjoy swift boot and load times, only that you may not play modern games here when not working. The integrated Intel UHD 630 graphics card here isn’t cut for gaming, but you can get away with casual games at very low frame rates per second (FPS). While at it, Dell’s Inspiron i5676-A696Blu offers the best of both worlds in an office-centric design but packs a dedicated AMD Radeon RX 580 (4GB DDR5) graphics card. If you often wander into PC gaming after work, the Inspiron is worth a long look.

The Aspire TC-865-UR14 is a great mid-size package all around. It is a great choice for a budget general-use desktop, especially if you want an option to upgrade in the future. Nonetheless, the peppy Intel Core i5 CPU and lots of storage adds to more reasons to like the Aspire TC-885 as a home-office system that costs less, but delivers more in terms of performance and upgradability. 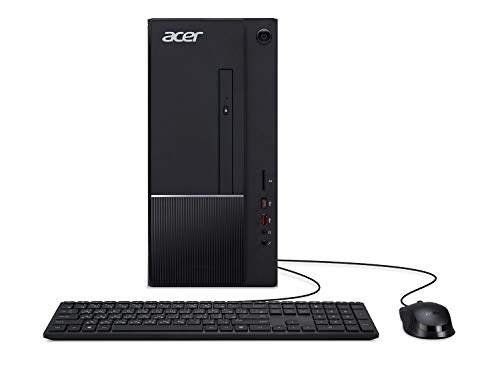 That said, the Acer Aspire TC-885-UA92 remains our Editors’ Choice with its 9th Generation Intel Core i5-9400 processor, 12GB RAM and 512GB SSD, a combination that’s perfect for general or business use.

If you’re buying for a small office, home use or deploying a couple of units for your small office, the Acer Aspire TC-865-UR14 easily makes to the top of the list.