The Acer Chromebook R11 (CB5-132T-C1LK) is a decent device with a unique combination of features. The Acer R11 scores where it matters most with a 360-degree display featuring an IPS Touchscreen, a quad-core Intel Braswell processor and 32GB of internal storage.

The newest iteration in Acer’s Chrome OS-powered device line up is the Acer Chromebook R11 convertible ( model CB5-132T-C1LK), a small laptop that is a different take on what we have been seeing in the Chromebook market. The 11.6-inch laptop comes with an average 1,366 x 768 touchscreen display mostly found on cheaper laptops but comes with a fairly responsive touchscreen that is better than those on the competition.

Under the hood is Intel’s Celeron N3150 dual-core processor (Braswell, 1.6GHz) and comes with 4GB of RAM and 32GB SSD hard drive for storage. There is a further 100GB online free storage in Google drive for two years. If you’re a casual user who is in the market for a laptop that can push you through daily computing needs, like surfing the internet, reading mail and word processing; then, read along.

At 11.57 x 8.03 x 0.76 inches, the Acer CB5-132T is a small device that will comfortably slip into your back bag for you to carry around. It has sharp edges, matt blue and white plastic and an expensive-feeling textured lid pattern. The Chromebook weighs 2.7 pounds which is rather bulky and heavy for an 11-inch mini laptop compared to the 2 pounds ASUS Chromebook Flip 10.1-Inch Convertible.

The pair of 360-degree hinges, as early seen in the Lenovo Yoga Pro 3, lets the Chromebook CB5-132T-C1LK flip all the way around into four different modes: laptop, display (screen facing outward), tent and tablet. Having the option to position it in a variety of modes is fun, but the sometimes sluggish performance makes it hard to recommend to anyone who wants to do more than a couple of simultaneous tasks.

The Acer Chromebook R11 convertible has an 11- inch screen with with a 1,366×768 resolution, a common feature in lower-level chrome OS systems, integrated with the In-Plane Switching (IPS) technology thereby allowing you to view the display from wider angles without compromising the quality.

The IPS technology comes in handy for the convertible device when changing from one viewing mode to the other. The display is quite okay for casual use, but the 1080p resolution seen on the Toshiba Chromebook 2 brings the difference due to its high resolution and clarity.

The Chromebook CB5-132T-C1LK is powered by an Intel Celeron N3150 Quad-Core Processor 1.6GHz, 4GB RAM and 32GB SSD storage. The device boots up in approximately 5 seconds and has the capability of streaming video and opening up web apps. The 4GB of RAM installed in the device is enough to handle basic tasks but you run the risk of having the machine slow down once you open more tabs.

Hopefully, the next version shall have 4GB of RAM for speedy connection even with the opening of multiple tabs and avoid instances of slowing down or stuttering. For power demanding tasks such as photo-editing, opening more tabs and running many videos at once, the pricey Toshiba Chromebook 2 carries the day as it comes with Intel Core i3 CPU.

There’s a 32GB SSD on board, this is half the 64GB of storage found on the Asus Chromebook Flip C433, but double the 16GB in the Dell Chromebook 11 Non-Touch and the Lenovo ThinkPad 11e Chromebook. The storage space appears inadequate but Google offers 100GB of free storage on Google Drive for two years enabling you to store and access your photos, music, videos, documents, and more from anywhere.

Connectivity options are quite excellent. There is a USB 2.0 port and a USB 3.0 port for faster transfer of files and connecting to other devices and peripherals. An HDMI port is available for connecting the device to larger screens. Wireless connectivity comes by way of dual-band 802.11ac Wi-Fi and Bluetooth 4.0.

The Acer R11 has a well-built Chiclet-style keyboard, the typing experience could have been made better if the keys could use more travel in the keys because there was too much resistance felt at times. The keyboard is not backlight, however, this does not come as a surprise for such a budget priced laptop.

The battery on the Acer CB5-132T is in good shape, as it lasted 10 hrs and 30 minutes on our tests, this is good news for road warriors as they can get to handle most of their work while on the move without worrying on the battery. The Asus Chromebook Flip leads the pack longer (11:15) but has a small and lower screen resolution. 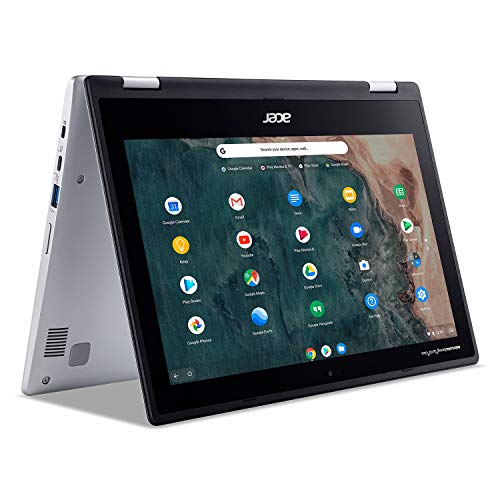 Whereas it is true that this is not the best-looking or fastest Chromebook around, the Acer Chromebook R11 Convertible (CB5-132T-C32M) is a decent device with a unique combination of features. The Acer R11 scores where it matters most with a 360-degree display featuring an IPS Touchscreen, a quad-core Intel Braswell processor and 32GB of internal storage. If your needs are light and you value the flexible hinges though, it’s a nice machine all the same.

But if you are not interested with touch, then the 11-inch Lenovo 100S Chromebook is ideal for you thanks to its 11 hours of battery life. All said and done, the 10.1-inch ASUS Chromebook Flip synthesizes the best innovations in the Chromebook category into a single system and does so at an affordable price. For that, it remains our Editors’ Choice.