The Acer Chromebox CXI3 is certainly one of the best, low-cost desktop version of Chrome OS you can find in the market right now.

Acer was among the first companies to showcase Chrome OS devices, since the early days of the Chromebook, and they’ve continually offered the best Chrome laptops around. Now, with the Chromebox CXI3-UA91 Mini PC, the company is showing that they can once again deliver the same-level of class-leading capability in a mini desktop.

Created for educational and professional users, this tiny Chromebox is perhaps the best thing to happen in the mini PC Chrome-OS space, and that distinction comes with an affordable price tag that you’d expect for a category that was defined by astoundingly low prices.

Like the Apple Mac Mini, the Chromebox CXI3-UA91 is compact and light, measuring 5.9 x 5.9 x 1.6 inches and weighing 1.2 pounds. However, the design is a little different from the likes of the Asus Chromebox and other past Chromeboxes that were boxy little units, this one has curved sides, with an oval shape when viewed from the front.

Acer made the CX13 into a black plastic chassis, with dark-gray faceplates on the front and back. There is an included stand, for which you can as use the box on its own, set it in a vertical orientation, on mount it at the back of a monitor using an included mount.

The Chromebox CXI3 also comes with a basic laser mouse and a chiclet keyboard.

Port selection is excellent. On the front face-plate, there are two USB 3.0 ports, a microSD card slot, and a headphone jack, alongside a power button.

Around the back, there’s a gigabit Ethernet port, two USB 2.0 ports, one USB 3.1 port, an HDMI output, a USB Type-C port, DisplayPort over USB-C and a Kensington lock slot. Wireless connectivity comes via 802.11ac Wi-Fi and Bluetooth 4.2.

Our review unit came equipped with an Intel Celeron 3867U Processor, 4GB of RAM and a 128GB SSD storage. Compared with most home-based desktops and laptops, these are impressive specs and rather lavish memory, given that Chrome is built to work on lean hardware, minimal RAM and little need for local storage. With such specs, the Chromebox CXI3-UA91 promises speedy performance you can feel. For instance, web browsing is snappy and responsive, as you can open 10 browser tabs while streaming 4K video without a hiccup.

The CX13 uses the Google Chrome operating system, so there exist some key differences from the usual Windows or MacOS machines. More significant, the Chrome OS is optimized for online use, as it relies heavily on loud-based storage, online apps in place of hard drive and locally installed software.

If you’re already online with most of what you, it may not need much of an adjustment. Still, most basic PC functionality is still on offer, especially with the Google office suite that effectively replaces Microsoft Office, and similar replacements are available for common apps like Adobe Photoshop whose functionality is replaced by apps like Pixlr and Fotor. Often, there are online versions of these apps made available by respective companies. 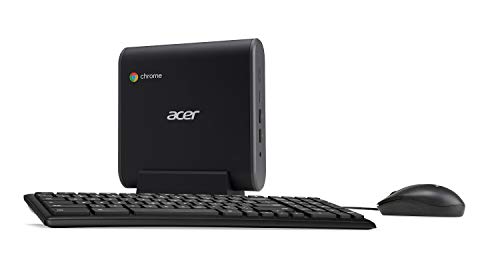 The Acer Chromebox CXI3 is certainly one of the best, low-cost desktop version of Chrome OS you can find in the market right now. While it’s not hard to find the big fish in such a small pond (provided you’re willing to spend more), the CXI3 still stands out with its solid performance, decent port selection and a design that offers great heat management and flexible mounting options.

Competitors include Apple’s Mac Mini and Acer’s Chromebox CXI3-I58GKM both with solid Core – i5 performance, but they cost almost twice as much. If you need better performance and a sleek design, the Mac Mini and CXI3-I58GKM are great mini-machines for general productivity and even more. That said, the Acer Chromebox CXI3-UA91 does manage to be less expensive than both of them, and the overall value proposition shifts once Chrome OS enters the picture.