The Acer Nitro 5 AN515-45-R92M is the latest refresh of the popular Nitro 5 series and brings with it a strong range of components and premium features like an RTX 3060 GPU and AMD Ryzen 7 CPU to help it keep pace with its midrange trappings.

The Acer Nitro 5 AN515-45-R92M is the latest entrant into the competitive mid-range gaming laptop market, but Acer is a common contender here – the firm has several builds on these sides at surprisingly low prices.

It now features new hardware, including a Ryzen 7 5800H and RTX 3060, and these components come at a higher price than we’re used to seeing from the Nitro Series – never go above $1,000, and when you factor in the highest resolution available on some of the laptop’s 15-inch configurations is 1440, Acer is certainly hitting more than the budget market with the newer Nitro 5 refreshes.

About the Acer Nitro 5

Here are the specs of the Acer Nitro 5 we reviewed

However, it’s just a shame that the new Nitro 5 models still keep the traditional, bulky design of its predecessors, and Acer hasn’t picked premium trends in the industry like a 16:10 aspect resolution.

Elsewhere, with this particular, Acer Nitro 5 – AN515-45-R92M model, Acer manages to pack strong performance all around, and its price point shows that Acer created it as a toe-to-toe gaming laptop to the like of Alienware, Asus ROG, and more of the best midrange gaming laptops.

Our configuration of the Acer Nitro 5 packs mid-range current-gen specs across the board, including a Ryzen 7 5800H processor, an RTX 3060 laptop GPU, 16GB of RAM, and a 512GB SSD. That specs sheet is a more consistent mid-range set of laptops we’ve reviewed (sometimes with a slight deviation in a form of Intel Core i7-11800H) but performance remains almost the same on competing laptops.

Some of the closest alternatives at this price point deliver close-matched performance, and they include Acer Predator Helios 300 (Core i7-5800H/RTX 3060), Alienware m15 Ryzen Edition (Ryzen 7 5800H/RTX 3060), and MSI Stealth 15M (Core i7-11375H/RTX 3060). In general, the newer components make this particular model of the Nitro 5 strong. Though not always leading in performance across its direct competitors.

The RTX 3060 zips through Far Cry New Dawn at Ultra settings with a punchy framerate of 82fps, and averages beyond 40fps in intensive games, like Assassin’s Creed Valhalla and Cyberpunk 2077. For today’s popular single-player games, that stacks well: you’ll run most games smoothly, but you’ll have to make concessions if you want to change averages at 60fps or beyond.

For easier games that need a lot of visual fidelity, the RTX 3060 GPU can hit framerates beyond 100fps, so you won’t have problems running the biggest eSports titles on the 144Hz display. However, if you’re chasing 240Hz performance at 4K resolution or more future headroom, you’ll have to invest in a pricier laptop with an RTX 3080 or RTX 3080Ti laptop, like the Gigabyte Aorus 15P YD and the Razer Blade 15, respectively.

A productivity workhorse, when not gaming

The capable processor creates more possibilities on this machine. If you’re comfortable with using the middling screen, or perhaps you can connect to an external monitor on your desk, there’s certainly enough power on this laptop to handle photo-editing and Full HD video work. You won’t have any issues with multitasking, either.

A full-size keyboard with a good layout

The 15.6in Acer has a full-size keyboard with a good layout, and it even includes a NumberPad with slightly narrowed keys. The keyboard has four-zone RGB LED lighting that allows for some decent customizations, too.

This keyboard has good performance, too. The buttons are fast, quiet, and very comfortable., so they can easily handle long gaming or typing sessions. While the keys’ action is a little soft, which might hold back people looking for a crisper experience, there isn’t much to complain about here.

The trackpad doesn’t hold any surprises – just a big piece with soft buttons, positioned on the left of the base. With this orientation, your wrist might easily trigger the pad accidentally. You’ll be better off with a USB gaming mouse.

An underwhelming display would be better

The Acer Nitro 5 AN515-45-R92M features a 15.6in display with a 1920 x 1080 resolution and a 144Hz refresh rate. This model lacks Nvidia G-Sync, meaning you’ll most likely see some minor tearing on the screen, but it won’t be a big or common issue. However, the lack of adaptive sync technology makes this display a fine candidate for mainstream gaming and eSports – you’ll have to spend more to get syncing and a higher refresh rate.

This screen is rated at 255nits of maximum brightness, which is fine for indoor use but may not be that strong for outdoors. Once again, the Nitro 5’s colors are a bit limited, as the screen only renders 61.5% of the sRGB color gamut. At this level, the screen has a long way to go before it can produce every shade required by games. The Delta E of 5.96 is simply average, too, and means accuracy suffers.

Battery life is mediocre, but we’re not surprised

On the nitro 5 gaming laptop, battery life is unsurprisingly underwhelming. In real-world gaming, the Nitro lasts three hours and twenty-four minutes, which isn’t good at all – combine this with the throttled performance on battery power and you’d be better off sticking to the mains while gaming.

The Acer Predator Helios 300 has a somewhat longer-lasting battery (6:23) life, and the Asus ROG Strix G15 delivers class-leading battery life for a gaming laptop at 10:14.

Should you buy the Acer Nitro 5?

Yes. The Acer Nitro 5 is an excellent choice for both work and play, we only wish the screen quality was better.

Let the Acer Nitro 5’s price not deceive you that this laptop has some hidden flaws. Yes, it’s a bit heavy, it doesn’t have particularly good battery life or color accuracy, but there’s still a lot to like, though. The RTX 3060 is a fantastic GPU for mainstream games and eSports, the Ryzen 7 processor and the Acer runs cool and quiet.

The keyboard is solid and comfortable and the price is just right. If you can cope with those few faults, the Acer Nitro 5 AN515-45-R92M is a capable and affordable machine – a decent mainstream gaming option that won’t dent your bank. 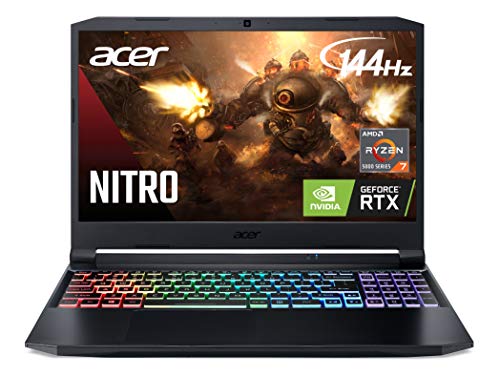