The Acer Nitro 5 AN515-55-53E5 is an economy gaming laptop, that offers a strong set of components and premium features like an RTX 30-Series GPU that help it stretch beyond its budget trappings.

Well, the Acer AN515-55-53E5 model has Nvidia’s 30-Series (RTX 3050, to be exact), that’s a better GPU, and approaches 60fps in top titles. It makes compromises for its low price, but if you can’t afford our Editors’ Choice, the Acer Predator Helios 300, you’ll find it a terrific value.

Design of the Acer Nitro 5

When it comes to looks and feel, there’s a lot to be desired with the Acer Nitro 5. That doesn’t mean it’s boring or bland – in fact, there are some winnings to appreciate here.

Nonetheless, we like the minimalist gamer look, with red trimmings on the keyboard, backlight and trackpad as well as the upper rear bar. The display hinges are sturdy and secure, and the available number of ports is a boon.

Beyond that, there’s nothing to write home about the Acer Nitro 5 design. The screen lid, for example, is made of cheap plastic, and the area around the keyboard track picks fingerprints like crazy, and the screen has almost an inch of bezels around it. Port options include the latest USB 3.2 Type C, another USB 3.2 Gen 2 (with power off charging), two USB 3.2, one HDMI 2.0 and an Ethernet port.

These are the three components we’re lukewarm about. The camera, which records video at 720p 30 fps at its highest setting, is blurry. If you’ll be using it for casual web chats, it’ll be fine, above that, don’t expect high quality imagery here.

The Acer Nitro 5 AN515-55-53E5 uses a 1080p, 144Hz refresh display, which is still sharp and clear, but it appears to leans towards the darker side (even at its brightest setting), and is essentially the exact of bezel-free.

More reason most of us buy Acer’s Nitro 5s is the keyboard. There’s nothing overly special about it; the symbols are in red, the backlight is also in red, and the WASD keys are emboldened in red paint. Overall, it’s just your typical, middle-of-the-road keyboard. Having said that, we find it very comfortable as well as quite reliable.

You’ll find the keyboard fast and responsive, and you won’t experience any lags, missed presses or accidental presses – during work or play. As for the trackpad, it gives a lot of travel and is quite stiff. While gaming laptop trackpads are frowned upon in PC gaming, especially for FPS, RPG and action games, we expected something better here.

In general, the Acer Nitro 5 is a strong midrange gaming laptop, with good scores in real-world gaming, though not always leading performance across our suite of test games.

As aforementioned, powering the Nitro 5’s gaming engine is the Nvidia GeForce RTX 3050 GPU with 4GB of VRAM. So, what does that mean? Well, with such a graphics engine, you can cruise England’s sprawling countryside at over 53 frames per second in Assassin’s Creed Valhalla at Ultra, 1080p settings. And, it means a few other things too.

This is partly to the newer energy efficient 10th-generation processor, and the not-so-bright display that doesn’t consume much battery.

The Acer Nitro 5 doesn’t steal our budget gaming Editors’ Choice from the recently anointed Asus TUF Dash 15 (TUF516PE-AB73), and it doesn’t come close to our midrange top pick, the Acer Predator Helios 300 (PH315-54-760S). Again, it’s simply hard to endorse a system with only 256GB of standard storage, though as mentioned, Acer’s available m.2 slot and 2.5-inch bay are big pluses.

Otherwise, though, this remains an impressive value – it has a comfortable keyboard, the screen isn’t that dazzling but is acceptable, and the laptop delivers true 60fps if you tone down the image settings a little bit. It also saves you some little cash to buy three or four top games, or even a secondary SSD, install yourself and store them. 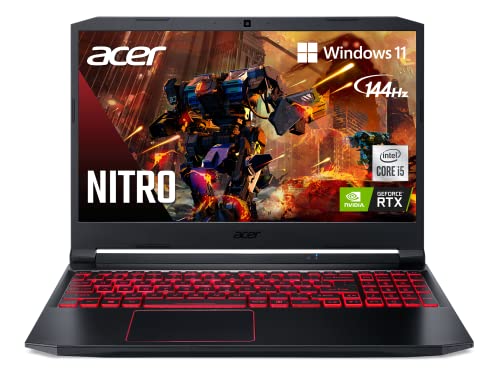