The Acer Nitro 5 AN515-57-79TD is a budget gaming laptop with an unobtrusive design that delivers stellar 1080p performance for the price, provided you’re willing to turn down the settings for some AAA titles.

The Acer Nitro 5 AN515-57-79TD is a reasonably powerful gaming laptop that won’t dent your bank account. Its 15.6-inch 144Hz screen is ideal for gaming and watching your favorite movies; while the 8GB of RAM and an 11th -gen Intel Core processor drive your everyday computing tasks and the RTX 3050 Ti graphics card allows for smooth gameplay experiences.

With that said, this iteration of the Nitro 5 comes with all the limitations of a budget gaming laptop. It isn’t the most powerful budget gaming laptop in the room, meaning you’re limited to playing less graphically-demanding titles, and you won’t crank the settings all the way up without affecting performance. And though the fairly bulky size isn’t unusual for a gaming laptop, we have devices like the Asus TUF Gaming F15 that prove you can have a relatively powerful ‘budget’ laptop that’s portable and as thin as a notebook.

The Acer Nitro 5’s shortcomings aren’t unique at this price point, we’ve seen worse including dated components and horrible battery life. In the case of the AN515-57-79TD, we can say, it is a great choice for budget-minded folks looking for a solid, if not remarkable gaming machine for playing modern titles.

Acer markets the Nitro 5 as a non-obtrusive laptop that won’t draw attention in the classroom or coffee shop. While the black theme isn’t as eye-grabbing as the Alienware m15 R7, it’s far from being discrete. Measuring 14.31 x 10.04 x 0.94 inches and weighing 4.85 pounds, the Nitro 5 won’t be mistaken for anything other than a gaming machine.

The Nitro 5 has something that reminds me of old gaming laptops, it looks muscular and bulk, but not excessively so. Laptops like the ultra-thin Alienware x14 and Asus ROG Zephyrus are as portable as they come, and the latter packs the best battery life on a mobile gaming device. Everything on the AN515-57-79TD is thick, from the lid, bezels, and hinges to the keyboard base. While it’s still portable, you’re going to feel the weight on your backpack as you carry it around college or to work.

All vents and ports are located along the sides and rear. Save for some red flourishes surrounding the rear vents, the Nitro 5 is otherwise an all-black that doesn’t shout “gamer”. Port options include the latest USB 3.2 Type C, another USB 3.2 Gen 2 (with power off charging), two USB 3.2, one HDMI 2.0, and an Ethernet port.

Along with a huge laptop comes an appropriately big display. The Acer Nitro 5 comes with a 15.6-inch FHD IPS screen with a 144Hz refresh rate that brings out the details found in graphically-demanding modern games. It’s also fantastic for movies and streaming content from your favorite channel. While not every game will take advantage of the 144Hz refresh, it nonetheless offers some headroom to deliver smooth frame rates while playing at 60fps or higher.

The keyboard is comfortable, with keys outlined in red and imposed over a red backlight. That shouldn’t be confused for per-key RGB backlighting, but the WASD and arrow keys have red outlines to help them stand out. The unique key on this deck is the NitroSense button, which calls the machine’s NitroSense performance software.

Elsewhere, the touchpad works pretty well. Thanks to the large platform, Acer managed to pack a spacious and responsive touchpad, with good pam-rejection. However, the left and right clickers give in when pressed firmly, suggesting the construction isn’t sturdy.

With its 11th-gen Intel Core i7-11800H and Nvidia GeForce RTX 3050 Ti, the Nitro 5 isn’t the most powerful gaming laptop out there. But that’s one of the sacrifices you make when you fall below $1,000. Still, you should be able to play most games fine, though you’ll have to turn down some settings to get high frame rates.

The Nvidia GeForce RTX 3050 Ti (4GB DDR4) is a mainstream GPU created for gaming laptops, that sits right below the RTX 3060 in the performance stack, and is seemingly a refreshed upgrade over the GTX 1660 Ti and GTX 1650 laptops cards.

With the graduation from GTX into RTX designation, it means the RTX 3050 Ti gets ray tracing and DLSS features, with the latter bringing a big boost into the mobile gaming segment. To put it into perspective, Metro Exodus (Ultra Settings, 1080p) averages 61fps, which is almost at par with the RTX 2060’s average frame rate of 58fps at the same settings.

In Horizon Zero Dawn played at maximum settings at 1080p, the RTX 3050 Ti is pretty faster than a comparable RTX 2060, delivering a solid 60 fps experience on the native laptop display. With that said, the performance is almost 18 frames behind the medium power configuration of the RTX 3060.

Finally, any gaming laptop worth its salt should also have some decent productivity chops. The Acer Nitro 5 has an 11th-gen Intel Core i5-11800H CPU, 8GB of RAM, and a 512GB SSD, which should be more than sufficient for getting a bit of work done when you’re not gaming.

Gaming laptops don’t have a good reputation when it comes to holding a charge, but the Nitro 5 does better than some of its direct competitors. This Acer laptop runs for 5 hours and 33 minutes on a single charge, and that consists of web browsing, light graphics work, and video streaming, all while connected to Wi-Fi with the display set to 150 nits of brightness.

The Asus ROG Zephyrus G14 leads the pack with 8-plus hours of battery life, but that’s a premium gaming laptop that costs almost as double as the Nitro 5. Elsewhere, the MSI Pulse GL66 runs for 3:18, while the Asus TUF Gaming runs for almost 7:30, which is recommendable. Gaming laptop as well.

While many people buying gaming laptops will have their eyes set on the most expensive systems out there, Acer continues to deliver for those whose budgets are a bit more restricted. The Acer Nitro 5, like its predecessors, continues to serve as a solid, entry-level offering for folks who want to game on a PC seriously.

Sure, the display and speakers aren’t as great as more expensive options, but they’re competitive with other budget and mid-range laptops. Perhaps the biggest issue is the amount of software Acer has jam-packed on all its Nitro 5s. Some of it’s useful, but in general, it’s bloatware that people buying this laptop won’t need, and may spend a few hours uninstalling.

But if you’re looking for a gaming laptop under $1,000, look no further. The Acer Nitro 5 AN515-57-79TD might not play all games on the highest settings, but it’s certainly a winner for the price. 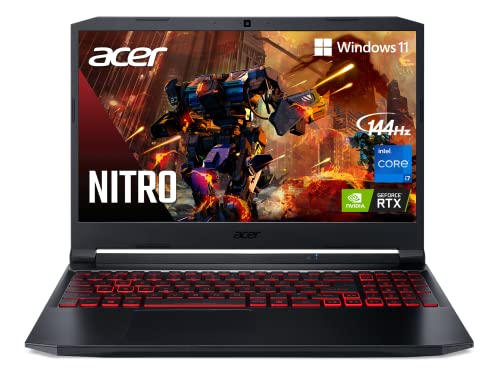 Is the Acer Nitro 5 good for gaming?

The Acer Nitro 5 is a solid gaming laptop for its price. While you can’t max out the settings on every game and expect it to deliver a stellar performance, but you can still get good performance if you turn a few graphical settings down. Also, the display is good enough for gaming at 1080p, we only wish it were a little brighter. Still, if you’re on a budget, you can overlook these shortcomings as this laptop is still very likable as a mid-range gaming machine.