The Acer Nitro 5 AN515-58-527S is a solid if not great gaming laptop for those on a budget or folks who’re just getting into PC gaming. While its affordability and refreshed design are commendable, we just wish its screen was bright and battery life longer like its 12th-Gen competitors.

The latest Acer Nitro 5 AN515-58-527S is a reasonably powerful gaming laptop that won’t dig a hole in your bank account. It arrives with a bright 15.6-inch screen that’s great for gaming and watching all your favorite content. Then, it adds a 12th-generation Intel Core i5 processor and 16GB of RAM that will facilitate smooth execution of everyday computing tasks and allow for smooth gameplay experiences. If you don’t mind playing at low to medium settings, you’ll have very little to complain about here.

This year’s model sports a plain design than some of years’ past, focusing less on the signature red and black aesthetic for a more toned-down look that can easily fit just about everywhere. It’s not Acer alone, however, many gaming machines in recent years have gone for a bit more plain design, and we appreciate the change.

We only wish this Acer Nitro 5 had a longer-lasting battery and were a little slimmer. Despite its shortcomings, the Nitro 5 (2022) isn’t a bad choice for budget-minded folks who want a solid, if unremarkable machine to play modern games on. Is this the right gaming laptop for you? Read on to find out.

About the Acer Nitro 5

For some reason, the older Nitro 5’s black-and-red aesthetics was beginning to get stale and stereotypical, so we’re just happy to see this new all-black scheme with modest color highlights replace it. The only thing Acer didn’t change is the weight, the new Nitro 5 is bulky as before, but that hefty gives some room for the hardware to breathe and keep things cool even when running demanding games.

Now you can run games like the Shadow of the Tomb Raider for almost half an hour and the bottom of the laptop will average around 35 degrees Celsius, and it won’t feel uncomfortable on your lap, the hardware also stays cool. Also, the fans don’t get loud when playing games, either. You can even play strenuous games like Cyberpunk 2077; the fans remain fairly silent making dialogue and game sound effects audible enough.

If you’re a quick typist, the Nitro 5’s keyboard is built for you. The keyboard itself is big and the keys themselves are a little bigger than your average laptop keys, and they’re more spaced apart than usual with sweet backlighting. The keys have a lot of depth and depress with a perfect amount of force – soft on the fingers, but not so delicate that they will be pressed accidentally.

On the right, the keyboard gets a dedicated Numpad and three media keys. As with most gaming keyboards, the WASD keys have a different, deeper font than other keys, and the knobs on the F and J keys are more pronounced. The red backlight complements the white underlay lining of the keys, making it easy to use in dark environments.

Elsewhere, the trackpad is also huge, smooth, and responsive making it easy to navigate across the screen. It’s pretty responsive, registering multi-touch gestures in a flick, and the fairly smooth surface provides very little friction. Clicking is accurate, although it requires some force to actuate.

Should you find it necessary to use an external mouse and keyboard, the Nitro 5 comes with lots of USB ports to plug in peripherals, as well as an HDMI port and an Ethernet port. To be specific, you’re getting one USB Type-C port, one HDMI, for USB-A, and a headphone jack.

With its Intel Core i5-12500H and Nvidia GeForce RTX 3060, the Acer AN515-58-527S isn’t the most powerful gaming laptop out there. But that’s one of the sacrifices you make when you fall below $1,500. Still, it plays most games well, though you have to turn down some settings to get high frame rates.

On the Shadow of the Tomb Raider, highest settings, the Acer Nitro 5 runs at 92 fps, falling below the MSI Pulse and its RTX 3070 Ti. Grand Theft Auto V (very high settings) is never a challenge for most gaming systems. The Nitro 5 runs at 74 fps, which is impressive over gaming machines equipped with RTX 3050 Ti graphic cards.

Whether you’re an e-sports gamer or an RPG enthusiast, the Acer Nitro 5 will certainly keep up. Since it can run AAA games at over 60fps and still make everything look buttery smooth on the 144Hz display, it means the Nitro is right on target for both the hardware and the price range.

Take, for instance, the HP Victus 16, a similarly priced machine with an 11th-gen Intel Core i5 and the same RTX 3060 graphics card as the Nitro 5 that pushes the same fps on most games. However, the newer 12th-generation Intel Core processors are so powerful because of their hybrid core design, which allows the processor to use its cores more efficiently than those running on last-gen architecture.

As a result, lower-tier Core processors, like the Nitro 5’s 12th-gen Core i5, run programs as quickly as the higher-tier chips of the last generation. all while keeping power consumption lower than last-gen, too. That counts a lot for productivity performance, whereby you can use this machine for almost all everyday tasks, from media creation to multithreaded processes like 3D modeling and rendering.

For gaming, whether you’re running an 11th-gen Core i7 or a 12th-gen Core i5 won’t make any notable difference (most games’ performance is GPU dependent) but the 12th-gen architecture is a boon for intensive tasks. Elsewhere, the 512GB SSD storage is a little tight for a machine that costs over one grand, but it’s still fast enough to deliver a performance boost.

A gaming laptop is still a laptop, and it should have battery life that will support common productivity tasks while on the go. Sadly, the Acer Nitro 5 fails to go past four hours – lasting only 3 hours 43 minutes before it went out. With such short battery life, it’s just not practical to tote the Nitro 5 AN515-58-527S to the classroom or office without having to sit next to a power outlet.

The Acer Nitro 5 comes with a 15.6-inch FHD (1920 x 1080) that’s pretty standard for a gaming laptop at this price, but we just wish it were brighter. While the display’s 144Hz refresh rate creates buttery smooth motion in games, its washed-out colors won’t make the action pop.

When the display’s color output and brightness are measured on a colorimeter, the Nitro 5 could only reproduce about 62% of the standard RGB color gamut. That means any game you’ll play on the laptop is going to look dull, and in an age where a lot of gaming laptops arrive with a gorgeous screen that at least covers the entire sRGB gamut, that’s disappointing.

The Acer Nitro 5’s screen isn’t particularly bright either. At 283 nits of max brightness, the display only gets bright enough for a well-lit indoor space, but it will look dark in direct sunlight. On the other hand, it does have good black levels, so if you’ll be using it indoors for most of the time, the Nitro 5’s display contrast gives a lot of depth to visual content.

Away from the display, audio on the Nitro 5 takes a hit too. While the sound it produces isn’t crackly or distorted, it’s a bit muted even at max volume, and its lower mids are recessed to the point that the audio output sounds hollow. It will suffice for the quick YouTube video, but if you want to play a game with a lot of audio presence, you’ll want to connect a gaming headset or external speakers for better fidelity and more depth.

Should you buy the Acer Nitro 5?

Yes, the latest Acer Nitro 5 AN515-58-527S delivers more value for the buck, that its quirks. This is a laptop that’s built first and foremost for gamers. It comes with a high refresh display, a powerful graphics card, and a hefty chassis with enough power to run games like Shadow of the Tomb Raider at high framerates without taking blows. And for the price, we feel like the configuration we’ve reviewed is well worth the price.

However, if you’re looking for a laptop that is perfect for more than gaming, you could feel suffocated by the Nitro 5’s bulky design and short battery life, which severely limit its portability. You can snag the Asus ROG Strix G15 Advantage Edition for almost the same price as the Nitro 5 or less on sale, and it outperforms the Nitro 5 for non-ray tracing gaming. It also comes in a fairly thinner chassis and boasts over nine hours of battery life, but you’re still getting a mediocre display.

If you need a gaming laptop with a spectacular display, the HP Victus 16 is your best bet, comes with a beautiful metal chassis and a vivid display, at a price that won’t break your bank. But if you don’t mind spending a little more, the Asus rog Zephyrus G14 packs a punch, thanks to an HDR-ready display, and offers eight hours of battery life.

Ultimately, if you find yourself choosing between the Acer Nitro 5, Asus ROG Strix G15, and the HP Victus 16, the best choice among the three will be the one that’s on sale at the time. That said, while the Acer Nitro 5 AN515-58-527S doesn’t do anything to stand out from the crowd, it’s still a likable, reliable gaming laptop. 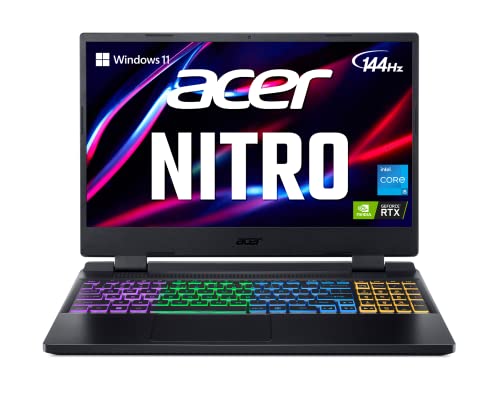