The Acer Nitro VG271 strikes a good balance of features, image quality and gaming performance. Everything from its 1ms response rate, 144Hz refresh rate and low input lag make for a great gaming monitor that won’t break the bank.

A monitor for everything. That’s the Acer Nitro VG271 Pbmiipx for you– a gaming monitor that you can comfortably use while gaming on PC or Console, editing photos, or writing. It boasts a 1080p IPS panel, 144Hz rate with adaptive sync, great peak brightness, and wide viewing angles.

Unfortunately, as with majority of IPS monitors, it doesn’t look as vibrant in a dark room. Also, it has bad ergonomics, and competing monitors in its price range, including the AOC U2790VQ, offer up to 4K resolutions. Still, even if 4K is at the top of your priority list, 144Hz is as fast as you can go right now on most gaming cards, even with the best 4K gaming monitor.

With the Acer Nitro VG271 Pbmiipx, you don’t have to look far to see where Acer cut some costs. The triangular-shaped base is made from light plastic and feels flimsy and wobbly. We’ve seen sub-$100 monitors with better and sturdy stands than this.

Its ergonomic adjustments are economical too, with the ability to tilt to the back by up to 20 degrees, and no option to rotate, swivel or adjust the height of the screen. Luckily, there are 100 x 100mm VESA mount holes at the back, which allows you to install your own stand.

Despite the middling stand, the Nitro VG271 does at least look nice. In particular, I like the three-sided borderless design and the monitor is easy to use, too. The on-screen display can be accessed via a clickable joystick and four buttons mounted on the rear of the screen, and the same settings can be tweaked via software.

Even more interesting, the Acer Display Widget works directly over a DisplayPort or HDMI connection; and unlike the Gigabyte Aorus AD27QD, the VG271 doesn’t require an additional USB connection – it will simply work over on all GPUs.

For physical connectivity, there are two HDMI ports and a DisplayPort input. I would vouch for the latter if you’re looking to utilize Nvidia G-Sync since Nvidia requires DP to enable G-Sync on a FreeSync-certified monitor. Thus, you’ll need an Nvidia RTX 10-series graphics card or above and Windows 10 to use this technology. For AMD graphics owners, FreeSync works straight out of the box with compatible AMD cards.

The Nitro VG271 Pbmiipx has a brightness of up to 300nits in standard definition and 400 nits for HDR content. It also has built-in speakers that you won’t find useful, and a headphone jack as well.

With two HDMI ports and a DisplayPort, you can plug your PC and next-gen console in simultaneously, you don’t compromise anything.

When gaming, you won’t feel any input lag, which is not surprising – Acer clocks the Nitro VG271 Pbmiipx at just a single millisecond of response time. At 144Hz on PC and 120Hz on PS5 or Xbox Series X, the motion looks sharp, even with overdrive settings set to Normal.

As with the IPS monitor, the Nitro VG271 Pbmiipx offers excellent viewing angles and the colors hold even when viewed from extreme angles. However, IPS monitors suffer from lackluster contrast ratio, and the Nitro VG271 is no exception, very noticeable in HDR mode. HDR does improve black uniformity, which isn’t great otherwise. But what this monitor lacks in blacks and contrast, it makes up for in its vibrant colors, despite the certification only being for HDR400.

The Acer Nitro VG271 strikes a good balance of features, image quality, and gaming performance. Its 27-inch IPS panel is great in a desktop-only proposition, but when sitting just 2 or 3 feet away, the super-sharp picture easily fills your view with vivid and accurate color.

Granted its contrast is merely average, it makes up with wide viewing angles and bold color saturation with HDR400 range. HDR offers almost triple the contrast of SDR, but compared to its class, the VG271’s HDR is also just average. There are faster monitors out there, but you’ll spend a little more. 144Hz is still the upper limit for this genre.

That said, both the Asus TUF VG27AQL1A and the Samsung Odyssey G5 are great 27-inch alternatives with WQHD (2560×1440) resolutions, but the Acer Nitro VG271 Pbmiipx still offers great value for 1080p gaming. 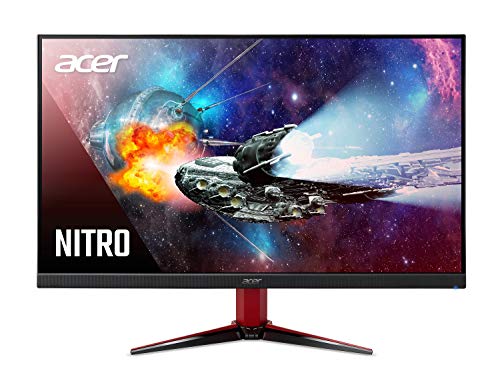