The Acer Predator Helios 300 (2022) is a fantastic 15.6-inch gaming laptop, with a gorgeous 240Hz display and offers the kind of outstanding anyone would need in a top-tier machine. However, it doesn’t do anything unique to make it stand out in a fiercely competitive field.

The Acer Predator Helios 300 (2022) is a sleek gaming laptop that’s the face of what every premium laptop needs to be. From the simple yet well-designed chassis, gorgeous RGB backlighting, and some latest tech, including a Turbo button, this gaming machine has it all, but it remains affordable compared to competing gaming laptops with similar hardware.

Last year, when we reviewed the Acer Predator Helios 300 (2021), we awarded it our Editors’ Choice badge for midrange gaming laptops, thanks to its impressive gaming performance and powerful hardware. It has remained among our top picks in the gaming category well into this year, competing with some of the latest gaming machines released, but it remains one of the best gaming laptops you can buy this year, too.

Acer has refreshed the already excellent Predator Helios 300 line for 2022, and the result is a more streamlined gaming laptop with a simplified chassis and powerful components under the hood to compare with today’s top-performing gaming machines. Not only does the new Helios 300 sport an even better design, but it also gets powerful components that make it a formidable PC gaming driver.

In addition to the sleek design, this 15.6-inch gaming laptop boasts a 12th generation Intel Core i7-12700H CPU, and an Nvidia RTX 3070 Ti GPU (you can upgrade it further), and a 2560 x 1440 resolution display. So not only will it run any of the most demanding PC games you throw at it, but it will run them well at fast frame rates on the highest settings.

The Acer Predator Helios 300 (2022) is a fairly premium gaming laptop available in various configurations. It starts pretty affordably at around $1,200 for the base model, with the rig we’re reviewing starting at about $2,100 (all prices at the time of writing this review). For the money, you’re getting lots of features and some incredible specs, especially as you move up the configuration ladder, making it worth every buck you spend. And honestly, when compared with the best gaming laptops it’s competing against, this pricing isn’t very steep.

The Acer Predator Helios 300 is a hefty fellow, with a weight of five and a half pounds, but that doesn’t make it the heaviest gaming laptop out there, but it makes it a little difficult to carry around.

Here is the Acer Predator Helios 300 (2022) configuration in this review:

Acer priced the new Helios 300 to reflect its quality, and if you have the money to splurge on a gaming laptop, this is certainly one of the best Acer gaming laptops to buy. Well, Acer has a few excellent gaming lines, and that brings some stiff competition as well.

Naturally, having such excellent gaming graphics as the RTX 3070 Ti brings along some class-leading gaming prowess, but it also does come with some tradeoffs. In the case of the Acer Predator Helios 300 (2022), which has to be the abysmal battery life, the laptop barely lasts three hours. This is a laptop that you’ll need to keep plugged in, especially during those intense gaming sessions. However, that’s pretty normal with gaming laptops and not a deal-breaker at all.

The Acer Predator Helios 300 design has been around for a while now, but Acer has admittedly crafted the 2022 model to look much sleeker and sexier than its predecessors. Still, it’s the same weighty and thick gaming laptop – it isn’t as portable as the Asus ROG Zephyrus 14 or the Razer Blade 15s of this world that you can randomly sling over your shoulder and hit the road. It weighs 5.51 pounds and measures 14.1 x 10.9 x 1.02 inches, which puts it firmly in the desktop replacement class.

For the 2022 model, Acer has refreshed the Predator Helios 300 design. It’s now more streamlined, sports a simplified chassis, and straight corners, and most of its ports have moved to the back of the notebook. It comes with three USB 3.2 Type-A ports, a USB 3.2 gen 2 Type-C port that doubles as a Thunderbolt 4, an additional power port, an HDMI 2.1 port, an SD reader, a combo jack, and a Kensington Slot. Wireless connectivity comes via Wi-Fi 6E and Bluetooth 5.2.

As with every other modern gaming laptop, the Acer Predator Helios 300 has an impressive screen – a QHD IPS screen with a 2560 x 1440 resolution and 240Hz refresh rate. The screen quality manifests when playing graphically demanding games, delivering buttery smooth gameplay ad the vibrant colors make the experience as crisp as can be, making this one of the best screens on a 15-inch gaming laptop out there.

There’s also a webcam that offers full HD resolution, a worthwhile feature for streaming gaming sessions. Unfortunately, it lacks a mechanical blind to cover the webcam for privacy, but that’s nothing close to a deal-breaker.

The keyboard is well-built as well, with well-spaced keys that have good travel for those rigorous gaming sessions. The trackpad is also a decent size, though we wish it were a bit bigger. But the real showstopper here is the RGB lighting that’s integrated into each key and allows you to make a lights show on your keyboard and can be customized as well if you prefer something more solid over the default rainbow colors.

The Acer Predator Helios 300 is a premium gaming laptop, performance should be top-notch, otherwise, why would you spend top dollar for one in the first place? And the Helios Predator 300 punches above its weight to deliver class-leading performance, nearly matching or surpassing most other premium laptop models including top-tier picks from the likes of Alienware, Asus, and MSI.

All this is thanks to solid components under the hood including a 12th-gen Intel Core i7-12700H processor, Nvidia GeForce RTX 3070 Ti, 16GB DDR5 RAM, as well as 1TB SSD storage. And, with the flexibility to step up to an RTX 3080 GPU, you’re getting top-tier specs, like what is baked into the Razer Blade 15 but at a much better price point.

If you find the standard performance not good enough for your liking, the Helios 300(2022) also supports G-Sync and, thanks to its Nvidia Ampere mobile GPU, ray tracing, and Deep Learning Super Sampling, gaming gets even better. It even includes a special Turbo button above the keyboard which you can activate anytime and which puts the fans and both the GPU and CPU into overclocked mode.

This works in tandem with the PredatorSense software that’s automatically included with the laptop and which lets you customize RGB lighting, overclocking settings, and fans settings.

The Turbo button is especially useful as it allows you to instantly improve the already impressive air circulation and almost instantly cools down an overheated laptop, while simultaneously boosting its performance. Ultimately, no matter how graphically demanding or poorly optimized your AAA game of choice is, the Predator Helios 300 (2022) will crunch it and spit it out at the highest fps.

As a productivity notebook, the Helios 300 is no slouch either, it balances non-gaming tasks well, may it be work or school tasks, and it performs pretty well. As you are already aware, it’s not going to have the portability of the best student laptops out there, but it’s a great choice for those who need some downtime after long nights typing away college essays in the library.

The Helios 300’s powerful specs are more than sufficient for juggling multiple tasks like movie streaming, conference calls, editing documents, and everything else. It comes with a pair of speakers that deliver superb sound quality that’s perfect for listening to Spotify or your music streaming service of choice while working on an assignment.

The Acer Predator Helios 300 (2022) is a gaming laptop full of positives, but battery life is a real negative, but we’re not surprised at all.

As powerful as the Helios 300 is, it shows abysmal battery life, which is almost a throwback to the old days of desktop replacements from five or six years that wouldn’t last an hour idling away from an outlet.

The Helios 300 will last a paltry three hours on a single charge, but we have gaming laptops such as the Asus ROG Zephyrus 14 that last well over 8 hours on a single charge. This is one laptop you’ll need to keep it plugged at pretty much all times, if you carry it along, you cannot stay too far away from an outlet. That’s not all, the sizeable power pack adds even more weight to your backpack.

The Acer Predator Helios 300 (2022) is a capable, midrange gaming laptop of choice. It has an impressive gaming flair, and a solid build, and is inconspicuous enough to take anywhere – provided you’re willing to lug the hefty piece of equipment around. It’s also the cheapest option out of the bunch.

Perhaps the most impressive part of the Helios is its fantastic display, with excellent color gamut coverage for a gaming notebook, especially one without OLED. That 1440p resolution and 240Hz refresh rate provide a good mix for graphics-intensive games and fast-moving esports games.

When we reviewed the Alienware m15 R7 at a lower price, that model wowed us with its sleek design and solid gaming performance, packing the same 12th-gen Intel Core i7-12700H CPU and Nvidia RTX 3070 Ti graphics card. It looks beautiful, runs games smoothly, and if you don’t fancy the Helios 300, the Alienware m15 is a great alternative that punches above its weight to deliver top-tier gaming and productivity performance.

Overall, there are greater choices than the Acer Predator Helios 300, like the Alienware m15 R7, with similar specs, comparable components, useful port options, and most importantly, improved performance. But with all the competitors performing in the same ballpark, the Acer Predator Helios 300 (2022) is still a solid pick-up if you’re looking for something future-proof and looking to save a few bucks.

Is the Predator Helios 300 worth buying?

The Acer Predator Helios 300 (2022) may pack components that look similar to what’s available in competing for gaming laptops, but it gets features that set it apart. For the price, it sets out to be a top-tier performing machine and accomplishes that in leaps, it boasts one of the best displays we’ve seen on a gaming laptop. 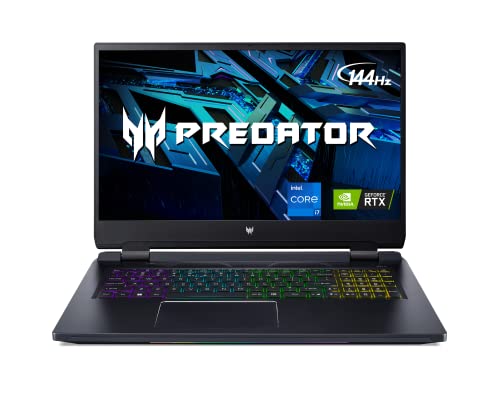 It also gets a Turbo button that allows you to overclock this machine with ease upping the air circulation and the same is replicated on the FPS in real-time. That’s the kind of raw muscle you ultimately need in a gaming laptop. We can’t recommend it more highly.