The Acer Predator Helios 300 PH315-52-78VL is a compelling mid-range laptop that packs the latest Nvidia GPU and Intel into an exciting case that promises fast framerates on modern games and strong productivity performance.

Gaming laptops are packing new features at a cutthroat pace, and Acer isn’t letting off its foot of the pedal anytime soon. Its latest Helios 300 offering is well worth considering if you’re after something at the affordable end of a scale that never disappoints on specs. Take the new Acer Predator Helios 300 PH315-52-78VL, for example.

This power-packed Predator feels like a gaming laptop with its very own identity.

These specifications aren’t the quickest around –not when you have RTX 2080 Turing and Core i7-9750H processors – but they’re not a slouch, either. In fact, the Predator Helios looks excellent on paper, given its price. Does this new gaming laptop hold up after a close look?

On the outside, the new Helios 300 PH315-52-78VL has the typical look of a gaming laptop. It sports a black design, save for blue accents sprinkled here and there. The lid is a brushed, hard plastic surface with a Predator logo along with two metallic, vertical lines that are not illuminated. The back is dotted with exhaust vents accented by two blue lines, one of which expands across the bottom of the device in a in an appealing angled design.

The bottom plays host to the feet and two easily removable pop-out lids secured with a tiny screw in each. This offer quick access to the two memory slots, you can upgrade to 32GB, and what looks like a compartment for adding a second SATA 3-based 2.5-inch hard drive or a solid-state drive.

About the only other blue accent you’ll find on Acer’s laptop is a thin blue line outlining the touchpad, and accented WASD keys for right-handed gamers, Lefties will do with the arrows. The blue trims are complemented by the laptop’s overall angular design along the top screen and along the front of the device. 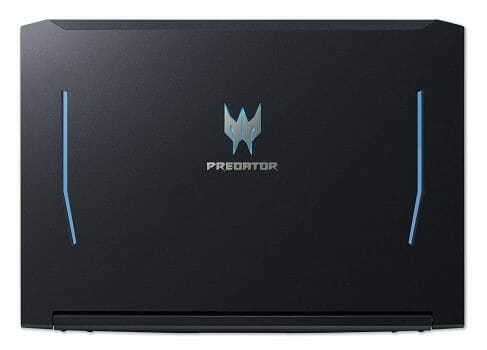 Meanwhile, if you’re going to be lugging this 5.07-pound laptop around all day, your shoulders won’t have it easy. Still, stacked against some rivals at this price range, the Predator is an obvious ‘lightweight’. Still, you can slip the Helios 300 in your backpack and tote it around the place without worry.

Positioned along those slim edges you’ll find a respectable number of ports. For gaming, Gigabit Ethernet is a must have if you’re always online but don’t have superfast Wi-Fi. There is a USB Type C port, three USB 3.1 ports (one with Power-off charging), an HDMI port, a Mini Display Port and a headphone jack. 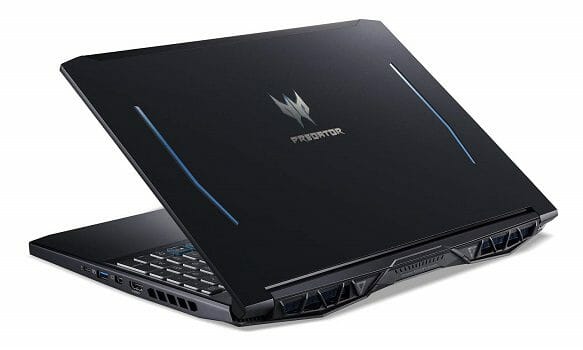 The Predator Helios 300 PH315-52-78VL’s 15.6-inch in-plane-switching (IPS) screen has a native resolution of 1,920 by 1,080 pixels. The screen has a matte finish, so you can comfortably use it, even in bright lighting conditions, without picking glare from the surface.

Being an IPS panel, its viewable from even odd angles, which is important when you have many people viewing the screen, some from over your shoulder. For the price, it is easier to expect a little more from the display, something better than 1080p, but it would be a bit of a stretch from a gaming laptop, or a high-refresh-rate panel, making this screen just fine.

After all, having a higher res-screen doesn’t mean that the Helios 300’s internal components would be able to handle graphic-intensive AAA games and deliver butter-smooth frame rates at 1440p or 4K. 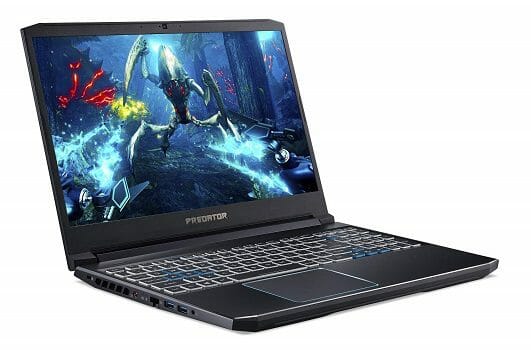 The chiclet style keyboard  on the PH315-52-78VL has nice travel, and it comes with a dedicated numeric keypad, which is a bonus for a 15-incher. In fact, it is very spacious, backlit with a large palm rest area. The WASD have painted blue accents, while the rest of the keys are black and white with backlighting. The keyboard is ideal for gaming with comfortable keys that provide long travel.

Acer doesn’t include any programmable keys, like most gaming laptops do, but they did implement a power button into the layout on the upper right. It isn’t possible to dim the keys individually – just on and off. The touchpad has red accents as well and is smooth to use with a good dual-cooling system. 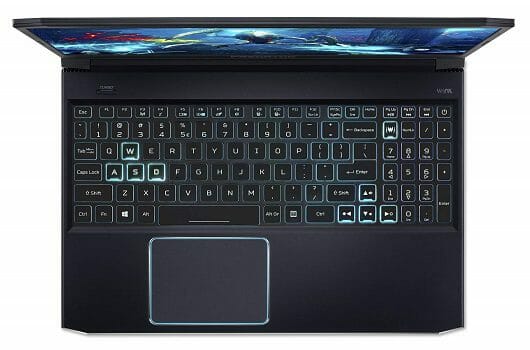 After a run of laptops using similar core components, the Acer Predator Helios 300 PH315-52-78VL is among the first we’re reviewing packing some new hardware of note, courtesy of Intel and Nvidia.

In addition to a 9th Generation Intel Core i7-9750H processor, the main item of interest is an Nvidia GeForce GTX 1660 TI GPU, the latest release in the graphics lineup. However, it isn’t the most powerful, there are ‘big boys’ in the lineup including the Turing RTX 2080 and RTX 2080 Ti: The released-in-April GeForce GTX 1660 Ti and its equally new partner, the GeForce GTX 1650, occupy a spot between the last-generation 10-Series “Pascal” GPUs, and the current top-tier RTX 20-Series “Turing” GPUs.

This is the first time we’re reviewing a laptop with both a GTX 1660 Ti and the Core i7-9750H, for that matter, so our review section will be setting the benchmark, if you will, for the components’ performance going forward.

In theory, considering its place in the hierarchy, the GTX 1660 Ti’s performance scores should be close to a GTX equivalent like a GeForce GTX 1070, but still below that of a GeForce RTX 2060. Both the GTX 1660 Ti and GTX 1650 are based on Nvidia’s Turing architecture, like the 20-Series GPUs in the GeForce RTX line, instead they bear GeForce GTX monikers, like last year’s Pascal GPUs.

Reason? Simply because, despite using Turing architecture, the GeForce GTX 1660 Ti and GTX 1650 don’t readily offer the advanced ray-tracing lighting technology or have Tensor cores, required for the anti-aliasing DLSS feature we’re seeing in a few top-tier games. The idea is to create a more affordable option that can still offer good performance without these prime features, and the Helios 300 indeed comes in at an appealing price point compared to similar laptops.

Rounding out the specs here are 16GB of RAM and 256GB SSD, which is adequate, if not ideal, amount for storing games. The storage option isn’t quite popular but it helps speedy up the system and store most of your games and files.

For general productivity, it all trickles down to the inclusion of the six-core (12-threads) processor and a GTX 1060, a potent combination for media creation and stable gaming at 1080p. It’s a better performer as compared to machines released in mid-2018 including the Dell G5587-7866BLK-PUS with a previous-gen processor and a GTX 1050 Ti graphics card.

Modern AAA games play at native 1080p resolution, and do so at impressive frame rates. The 2018 edition of Counter-Strike: Global Offensive, for example, at maximum settings tallied 159 frames per second (FPS) but drops to 134 fps at the more intensive Ultra preset. Other titles affirm the Predator’s gaming prowess including: Fortnite (127 FPS) and League of Legends (172 FPS) in the same maximum detail settings. In all these games, the system delivers smooth frame rates.

It’s clear that with an onboard 1080p display, this iteration of the Predator Helios 300 is a robust mobile gaming laptop. These numbers are at par with other laptops featuring the VR supporting GeForce GTX 1060, but the newer Coffee Lake CPU counts for a lot more. Seeing that the screen has a 144Hz Refresh Rate, it means that the system can easily deliver better than 72 FPS, giving more reason for the system to come with anything more powerful than this GTX 1660 Ti graphics card.

On battery life, the Predator PH315-52-78VL is stuck at the middle with 5 hours 12 minutes when streaming videos, but battery drain becomes a reality on actual game-play. For that, you’ll need to connect to a power outlet if you’re planning on longer sessions. Machines with better graphics performance, such as the MSI GL63 9SDK-614 and the ASUS ROG Zephyrus S, only last a little more than 2 hours given their processing power combined with large, hi-res screens sucking up power.

The Acer Predator Helios 300 PH315-52-78VL is a compelling mid-range laptop that packs the latest Nvidia GPU and Intel into an exciting case that promises fast frame rates on modern games and strong productivity performance. Though it isn’t the most extravagant, and certainly not the most portable, the Predator Helios 300 sits at exciting spot in the PC gaming industry, offering a perfect balance of value and performance. It’s the 15-inch midrange gaming laptop to beat.

Unless you need something more portable and definitely costly. If that’s the case, the ASUS ROG Zephyrus S GX531GW-AB76 is a top-of-the-line gaming laptop we can recommend, with the same Intel Core i7-9750H hexa-core processor, a GeForce RTX 2070 GPU, 16GB RAM and 512GB SSD. If all that power sounds like an overkill, the Predator Helios 300 PH315-52-78VL offers better value at a lower price point.

Yes. If you need a gaming laptop that makes fantastic use of the latest components, the newest Predator Helios 300 is a great choice.