The Acer Predator Helios 300 PH317-51-787B has its gaming credentials in order, including a gaming aesthetic, the latest GTX 1060 graphics card, a powerful seventh-generation Intel Core i7 processor among other goodies that push it to the top of the midrange gaming category.

As gaming laptops become more powerful, it’s possible to get a no-frills system, with a larger screen, but bears the aesthetic footprint of a 15-inch laptop. The 17-inch Acer Predator Helios 300 PH317-51-787B is a member of this rarified group, that is a behemoth of screaming-fast graphics, but has the body of a smaller system. In fact, it looks like its 15-inch stablemate from last year, the Acer Predator Helios 300 (G3-571-77QK) model.

For storage, the Predator 787B gets an additional 1TB hard drive over the base model’s 256GB SSD. If a bigger screen and more storage excite you, you should seriously consider it for the ancillary feature.

This iteration of the Predator line has the same looks and is nearly identical with the previous one save for the bigger screen and chassis. It measures 1.1 by 11.4 by 17 (HWD) and weighs 6.61 pounds, which is a smidge bigger and heavier than its 15-inch sibling, measuring 1.1 by 10.5 by 15.3 (HWD) and weighs 5.95 pounds. About everything else remains the same: keyboard layout with four dedicated macro keys, screen resolution, and I/O ports. As with previous predator models, it gets the same sharp edges; red highlights across the chassis, grille vent and lid; overall it feels and looks fairly well made.

It doesn’t have the gaily lighting we usually see in gaming laptops. Instead, Acer opted for a laid-back matte black profile, and struck it with two red accents that come in way of fancy strikes on the cover sandwiching a predator logo. A red stripe covers the touchpad border and similarly colored rear fan exhausts. To give it a premium look, the central hinge is toned in silver which blends well with the matte black body and red accents.

The chiclet style keyboard has nice travel, and it comes with a dedicated numeric keypad. The benefit of having a 17-inch screen is that it gets you a full numeric keypad, and ample key space on the deck, unlike the cramped decks on 15-inch laptops. The WASD have painted red accents, while the rest of the keys are black and white with backlighting. The keyboard is ideal for gaming with comfortable keys that provide long travel.

Acer doesn’t include any programmable keys, like most gaming laptops do, but they did implement a power button into the layout on the upper right. It isn’t possible to dim the keys individually. The touchpad has red accents as well, and is smooth to use with a good dual-cooling system.

Port selection is excellent. Here you get two USB 2.0 ports, one USB 3.0 ports (one with power-off charging), an HDMI port, Ethernet, and the new USB 3.1 Type-C. Others include, the AC adapter jack, a Kensington lock slot, and a headphone jack. That’s not quite as many ports as you get in rival gaming laptops, but the available I/O ports are still sufficient.  For wireless connectivity, the Helios uses the fast, dual-band 802.11ac Wi-Fi, and Bluetooth 4.0.

Storage is quite sufficient for the most important games and files, if you need more you can always hook-up an external drive. Our review unit packs a 256GB solid state drive (SSD) plus a 1TB 7200RPM hard drive. The Acer Predator 15 (G9-591-74KN) boasts of a 1TB, 7,200RPM hard disk drive (HDD) and a 512GB solid state drive (SSD), similar to the MSI GS60 Ghost Pro 3K, which is more than enough space for most users. It comes with Windows 10 pre-installed.

Notably absent is support for Nvidia G-Sync, which eliminates the stuttering and tearing in games by matching what’s being displayed to what’s actually being rendered by the GPU. While it’s not a must-have feature in gaming laptop, G-Sync improves your overall experience by eliminating common animation glitches that could distract you and prompt you to spend some time adjusting the display and game quality settings. To get G-Sync on the Helios 300, you’d have to hook the laptop up to a monitor with G-Sync support like the 27-inch  ASUS PG278QR.

The major update for this Helios is the Nvidia GeForce GTX 1060 graphics card with 6GB of dedicated GDDR5 VRAM, as well as the 2.8GHz seventh-generation Intel Core i7-7700HQ processor. This combination does invariably result in a bump in performance, which is impressive. To that, add 16GB DDR4 system memory and you have in your hands a beast for a gaming laptop that will perform productivity duties like video conferencing with ease, even better than most midrange gaming laptops.

The Helios 300 excels in graphics applications, thanks to the Pascal-based GTX 1060 graphics card. Despite the lack of G-Sync technology, the graphics-sipping Far Cry 4 played smoothly at native resolution, looked vibrant, and was very responsive. Notably, GTX 1060 is a better match for most modern games being among the high-end Nvidia chips, thus will deliver better overall performance as compared to the entry-level Nvidia GTX 1050 Ti and GTX 1050; both in the Pascal architecture.

With a 4-cell Li-ion Battery (3220 mAh), the laptop lasted only 5 hours and 49 minutes on our rundown test – Acer bills it at 7 hours. Most midrange gaming laptops don’t even come close, but lately  we’re seeing midrange gaming laptops hit the 8 hours mark; but its better than the GT72 Dominator Pro (3:25), Ghost Pro 3K (3:17), and the Razer Blade (4:52). Machines with better graphics performance, such as the Asus ROG (G752VT-DH72) and the Origin EON15-X, only last a little more than 2 hours given their processing power combined with large, hi-res screens sucking up power. 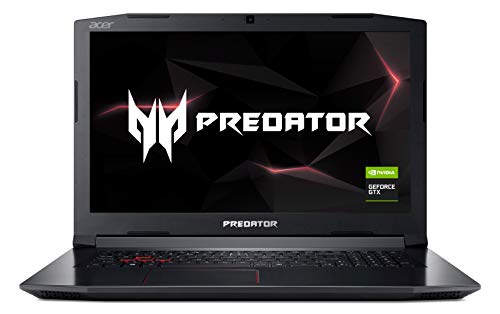 The Acer Predator Helios 300 does bring modest improvements over last year’s model on both design and performance. With a solid feature set, it does undercut much of the Pascal-bearing laptop competition. There are more powerful alternatives out there, some more powerful components such as GTX 1070 and 1080 graphic cards, better 4K displays, and sleeker designs, but the Helios 300 still remains insanely affordable. For instance, the HP Omen 17 gets an even better graphics card, doubles the storage, and a 17-inch 4K screen, though it weighs slightly more.

For demonstrating the performance and design that is required for a forward-looking gaming laptop, the Acer Predator Helios represents value that is hard to beat. If you’ve always wanted a bigger gaming laptop that isn’t a burden to carry around, but offers strong gaming performance and doesn’t haggle with productivity tasks, you should seriously consider the Acer Predator Helios 300 PH317-51-787B.