The Acer Predator Helios 500 is an AMD-powered gaming laptop that has a lot to like. It’s exceedingly powerful on the front, is unmatched by anything else in its class for multi-threaded productivity

From the moment you power on the ‘big blue’ Acer Predator Helios 500 17 AMD, you know you’re in for some serious gaming. The 17-inch Helios 500 model we’re reviewing (PH517-61-R0GX) is not only tricked-out with RGB lighting that extends from the keyboard all the way to the touchpad, but its speakers let out a swooping screech every time you power it on – to announce the Predator has arrived.

This predator is an antithesis of you common svelte Max-Q gaming laptops like the Asus ROG Zephyrus G15, it comes big and weighty, a design that helps it achieve its full performance potential using a combination of impressive thermals and full-graphics silicon. It combines a second-gen Ryzen desktop CPU and Vega 56 graphics to deliver good performance on both gaming and productivity tasks.

Now you have a big gaming laptop that doesn’t look like the rest. Most gaming laptops come in black-and-red, but the Acer Predator Helios 500 17 AMD is dressed in a black chassis with some blue here and there, and includes AeroBlade 3D fans for cooling. Except for the unique blue color, everything else looks gaming standard.

The chassis is cut from plastic, something we find rather odd, considering that competing laptops like the Razer Blade 15 and Asus ROG Zephyrus S have metallic bodies. Anything that goes for over a grand, we always expect an aluminium body, sadly that’s not the case here – not a deal beaker either.

If you’re looking to replace a dated gaming rig, the Predator 500’s size and power packed makes for an excellent choice that you can occasionally lug to tournaments and the like.

A big sized laptop often gives you considerable port freedom, and the Helios 500 offers exactly that. On the right side, there are two USB 3.0 Type-A ports, separate headphone and microphone jacks and a Kensington lock slot.

The left side holds two USB Type-C 3.1/Thunderbolt 3 ports, an Ethernet jack, and a single USB 3.0 Type-A port. Around the back of the machine, you have video outputs – HDMI and DisplayPort outputs – that let you extend the screen by up to three displays via HDMI, DisplayPort and the USB Type-C port.

Surprisingly, an SD-card slot is missing, something preferred by media professionals who often use dSLR cameras and high-end camcorders, but need to transfer the extra loads to the laptop. Wireless connectivity comes in way of 802.11ac Wi-Fi and Bluetooth 5.0, alongside wired Ethernet connection.

Another win on the Helios 500 is the speakers that produce quality audio that’s impressive and bassy enough to fill a room, and free of distortions when cranked all the way up. There’s also a 720p webcam right above the screen, in the center of the bezel. It works well for video conferencing, but it isn’t your usual high-resolution cam.

Gaming laptops rarely have unique screens, perhaps the only difference you can have is the GPU engine – either AMD or Nvidia – the other features are pretty standard. On the Helios 500 you have a 17-inch matte IPS panel with a 1080p (1,920 –by-1,080) resolution. The only notable additions here a AMD Radeon FreeSync and the screen has a 144Hz refresh rate, both ideal for high-end gaming.

What these features do is that they allow the screen to display your games among other content, at up to 144Hz frames per second (fps), thanks to the high refresh rate, and you won’t suffer from screen tearing once you activate AMD FreeSync.

In gaming, tearing is a common form of distortion that manifests when a display tries to write a new frame to the screen before the previous one has fully written, resulting in a screen with mismatched halves. When enabled, either AMD FreeSync or Nvidia G-Sync allow a screen’s refresh rate scale up and down in tandem with the frame rate that the graphics chip is putting out, thereby reducing the tearing issue.

On the keyboard, the directional-arrow and WASD keys are bordered with blue paint job that easily sets them apart. On the upper deck, near the hinges, you find a row of dedicated hotkeys that you can program to any function of your choice, including auto-overclocking.

Also, there is key backlighting that lets you change the lighting hues in the machine’s built-in PredatorSense software, but the entire keyboard and touchpad have a blue haze backlight by default, which also extends to the six hotkeys and the power button. However, the keyboard doesn’t offer per-key programmable lighting, instead, you have four-zone RGB backlighting that you can customize from a palette of 16.8 million colors.

As expected, the feel of the keyboard doesn’t disappoint at all. Acer uses a membrane keyboard here, but it still offers deep and satisfying key presses, and for a moment you’d think the Predator Helios 500 uses mechanical switches.

The Acer Predator Helios 500 17 AMD model we’re reviewing is among the first Helios 500 to deviate from Intel and Nvidia hardware. Instead, it is fully powered by AMD’s high-end components, and it will sure give its Intel competitors a strong chase. It boasts an AMD Ryzen 7-2700 desktop-level processor, an eight-core, 16-thread processor which has a base clock of 3.7GHz and can perk all the way to 4.3GHz when Turbo Boost kicks in. The AMD Radeon RX Vega 56 graphics processor is backed by 8GB of HBM2 memory and runs Windows 10 Home.

This is a solid configuration, that easily competes with Intel’s Core i7-8700K CPU found in gaming desktops such as the Dell Alienware Aurora and iBUYPOWER Pro Trace 928770, both high-end gaming rigs with solid gaming and productivity scores.

With such a powerful CPU and a capable graphics card, the Predator Helios 500 stands out as a perfect desktop-replacement laptop, that you can use for complex productivity tasks like media creation, Photoshop and gaming at the same time. Moreover, the Acer Predator Helios 500 has a 256GB PCI Express NVMe solid-state drive (SSD). Its 16GB of RAM is standard for a midrange or high-end gaming laptop in 2019.

So much for the core components, gaming performance gets a boost too. Powerful as it is, the Helios 500 fares well on modern games over its meatier competition, some of which use pepper CPUs or GeForce GTX 1080 graphics chips. It garners an average of 122 fps on Fortnite played at 1080p, High settings, but it slows a tad to 109 fps in Ultra settings.  In Grand Theft Auto V, at Medium settings, the Helios 500 earned an average frame rate of 103fps, as opposed to 82fps at the High graphics setting.

While you can’t really overclock the AMD Ryzen 7 CPU (only the Core i9 version of this machine comes with an unlocked CPU), the Helios 500 has a built in PredatorSense software that does make it easy to overclock the GPU when required. It usually has three overclock modes – Normal, Faster, and Turbo, through which you can crank up to better fps. On this machine, PredatorSense software lets you control and customize your gaming experience, from lighting, fan speed to game profiles.

Even with the playable frame rates, rarely will you bump up a game against the Helios 500’s 144Hz refresh rate display. Most games will be around 60-130 fps, but less demanding non-AAA games should see frame rates above 144fps even without tweaking the settings.

The Acer Predator Helios 500 is rightly a desktop replacement, and that’s more clear down to its battery life which is rather short. It clocks round 2 hours 46 minutes, which is way below the Alienware 17 R5’s equally-ho-hum 3 hours 58 minutes. Just picture yourself trying to work from a bar or coffee shop from this behemoth, then you discover they don’t have power outlets. A battery life south of 3 hours is hard to swallow for any laptop, especially one that the manufacturer touts for having “long battery life”.

The Acer Predator Helios 500 is an AMD-powered gaming laptop that has a lot to like. It’s exceedingly powerful on the front, is unmatched by anything else in its class for multi-threaded productivity thanks to a 16-thread Ryzen 7 CPU, and it runs surprisingly quiet considering the computing grunt during gameplay. Its screen is great, has a high refresh rate and AMD’s FreeSync tech makes it even better. If only Acer would manage to deliver all this and reasonable battery life, we’d probably be looking at an Editors’ Choice for 17-inch gaming laptops.

While the AMD-powered model of the Acer Predator 500 is likeable, the Intel/Nvidia based Acer Predator Triton 500 is even better as an all-round laptop. It costs slightly more than our review model, but it lasts an hour longer when plugged, and you get a much bigger 256GB SSD + 1TB Hard Drive. The 256GB SSD on this model is rather lean for ac gaming laptop in a world of 100 GB-plus game downloads.

Yes. So long as battery life isn’t a concern, the Acer Predator Helios 500 17 AMD offers the highest possible refresh rates around, with a color scheme that’s a welcome departure. 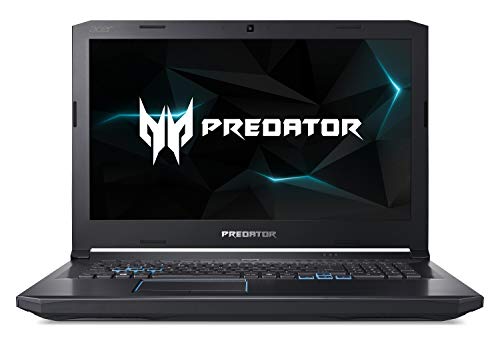