The Acer Swift 3 SF315-41G is a decent productivity laptop that combines solid performance with an appealing aesthetic. It's a great choice for office and college, but Acer has since released newer laptops in its line with 12th Gen processors and sleek designs.

The Acer Swift 3 SF315-41G is capable laptop designed for anyone looking for a solid workhorse laptop for use at the office or college. This 15-inch laptop packs a powerful AMD Ryzen 7 2700U CPU, AMD Radeon RX 540 graphics, 8GB RAM and 256GB SSD storage. As configured, it packs all the power you need in a productivity laptop.

The other iteration we’ve seen with the latest Core CPU is the Acer Swift 3 (SF314-52G-55WQ) which adds a dedicated Nvidia GeForce MX150 graphics card over the basic configuration. But beyond that, the new Swift laptops don’t, particularly anything special over their predecessors.

That was back in 2019, Acer has since updated its Swift 3 line of laptops in 2022 to include more powerful 12th Gen processors.

The Acer Swift 3 SF315-41G is bigger than its 14-inch predecessor, but both have an all-aluminum body as the main asset. Out of the box, it opens to a screen lid, keyboard surround, and base all made of metal, and it looks great for it. When you open it, you’ll find a 15.6-inch, 1080p display, a standard island-style keyboard, a brushed aluminum deck, and a fingerprint reader. The silver hinge looks strong – looks can be deceiving sometimes, but it does a good job supporting the screen.

One more thing the Acer Swift 3 has going for it must be the 4.6 pounds lightweight profile, making it lighter and thinner at 0.7 inches than its competitors. The Acer Aspire E 15 E5-575G-57D4 weighs 5.2 pounds and is 1.2 inches thick, and the Lenovo Flex 5 weighs just over 4.4 pounds and is 0.8 inches thick.

Less welcome is a glass front panel on the screen that will see you trying to increase brightness, and the colors aren’t much in place. For instance, watching a trailer for The Hunt, the green trees in the tropical forests have leaves with strange colors and a yellow tint, and it’s hard to see the predators in the woods at first. The screen covers a 78 percent sRGB color gamut and 177 nits; lower than the Aspire’s 158 percent and Flex’s 133 percent, but still delivers acceptable hues.

The island-style keyboard is well laid and feels comfortable. With just 1.2 mm of travel, it isn’t very sparky among its peers but is sturdy thanks to the aluminum deck that prevents flex. It is very possible to do over 104 words per minute, which isn’t badly off. Its touchpad measures 4.2-by-3.0 inches, meaning its spacious and responds well to gestures, including finger taps to open Cortana. The speakers are nice and loud enough to fill a small room, though the vocals aren’t precisely balanced.

Even with a slim profile, the Acer Swift 3 SF315-41G manages to include almost all of the ports you’d need. On the left side are an HDMI output, a USB Type-C port (which doesn’t support charging), two USB 3.0 ports (one with power-off charging), and a headphone jack. The right side has an SD card slot, a USB 2.0 port, and a Kensington lock slot.

It doesn’t have an Ethernet port, but you can connect wirelessly via dual-band 802.11ac and Bluetooth 4.0. Others include a front-facing webcam and a fingerprint reader.  For storage, the system gets a 256GB solid-state drive (SSD), which is in the same ballpark as most systems in this category including the ASUS ZenBook UX330UA-AH54, but the Acer Swift 7 doubles that memory, though it comes with a 7th Gen CPU and a 13-inch screen.

The Acer Swift 3 is available in a couple of different configurations. Our review unit is the Acer Swift 3 SF315-41G, which is the only one in the line with the AMD Ryzen 7 2700U processor, 8GB memory, and 256GB SSD; while the rest use Intel’s seventh-generation processors. Many users should be happy with the Ryzen 7 version since the extra processor speed and power efficiency certainly makes the upgrade worthwhile.

In fact, for an average multitasker, the Ryzen 7 2700U is more than enough. With it, you’ll be able to open over 15 chrome tabs, with two streaming 1080p videos, and other background tasks without any hint of slowing down. Thanks to its PCIe SSD, the system benefits from faster copy speeds, something most of its predecessors can’t easily beat.

You might be able to play low-level games here, but the AMD Radeon RX 540 graphics card may not be sufficient for modern games at high settings, but you can still play at low settings. For instance, the much you’re getting on basic titles like Dirt 3 is 61 frames per second (fps) which is way lower that the average of 95 fps, though even laptops with dedicated GPUs never hit the base score. The Asus TUF Dash 15 (2022) is something you can consider for midrange gaming, as it packs a dedicated GeForce RTX 3060 graphics card. entry-level gaming with its Nvidia GTX 1050 graphics card.

Acer claims that the Swift 3 can offer up to 10 hours of battery life. If we can steer away from the market slang, the much you’re getting is just over 7 hours of continuous web browsing over Wi-Fi. To be fair, it is better than the mainstream average of 6 hours, but the Apple MacBook Air M2 delivers over 18 hours of battery life on a single charge.

The Acer Swift 3 SF315-41G is a decent productivity laptop that combines solid performance with an appealing aesthetic. The AMD Ryzen 7 CPU combined with AMD RAdeon RX 540 graphics and 8GB RAM make it a perfect choice for office use and will shine bright at school too.

That said, there are newer laptops with 11th/12th Gen processors that offer premium design, better performance on everyday productivity tasks and longer battery life. The Acer Swift 3 (SF314-512-78JG) is one such laptop. It packs an Intel Core i7-1260P processor, 16GB RAM and 512GB SSD in a thin, lightweight chassis. It comes highly recommended. 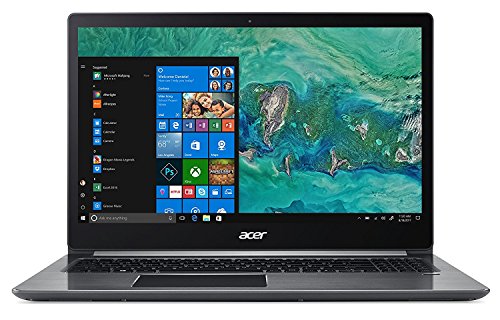