Available in many configurations, the ADMI Gaming PC line has something for everyone – from the causal gamers on a tight budget, to the high-end gamers and pro-creatives who need the best a desktop PC can offer. Our review model sits at the middle of the pyramid, with an Intel Core i5 CPU, Nvidia’s RTX 2060 GPU and lots of memory.

It’s one of those gaming PCs that double-wheel for professional tasks including media creation, video editing and pretty anything that needs a capable workhorse. But, even with its massive power offering, it is aggressively price.

Our ADMI gaming PC review unit sports a standard cooler master chassis, that looks quite familiar. If you’re from a custom rig, you must have encountered the black metallic case with a trio-LED circles on the front, easy access ports, a tempered glass side panel, and an LED-lit cooling fan on the rear.

Measuring 62 x 57 x 50 cm, and weighing 10 kgs, the ADMI AD-974-573-57EV16RD is almost same size as its CyberpowerPC Gamer Xtreme and Skytech Chronos competitors, which is a good thing as it can accommodate future upgrades.

Port selection is standard, with both front and rear ports for connecting all your peripherals. In total, you have six USB 3.1 ports, two USB 2.0 ports, and Ethernet port, and a 7.1 audio channel. On the RTX 2060 graphics card, you have an HDMI and DisplayPort for multi-monitor setup. Wireless connectivity comes via 802.11AC Wi-Fi.

The package doesn’t include a gaming monitor or mouse, for which we recommend havit Wired combo the for your gaming escapades. The monitor is not included, but you have a variety of gaming monitor to pick from, including the gorgeous 27-inch ViewSonic XG2705, that features a 144Hz refresh rate and AMD FreeSync support.

The Nvidia GeForce RTX 2060 (with 6GB) in our review unit isn’t the most powerful, not when you have the likes of Nvidia’s RTX 3080 Ti rocking the charts, but it still delivers the power you need to play today’s AAA titles at 1080p and 1440p at high settings. That should be it, 4K gameplay at high settings will be a burden altogether. If you’re gung-ho about 4K, consider a rig with a better graphics card – something like the Alienware Aurora R11 with the latest Nvidia RTX 3080 (OC Ready) is a recommendable choice.

In Call of Duty Black Ops Cold War (high settings), the ADMI Gaming PC plays at 81 fps at 1080p resolution, but the frame rates drop to 47 fps in 1440p resolution. For a system that costs less than competing units, this is decent performance, and it proves that you can get away with butter-smooth on other titles. 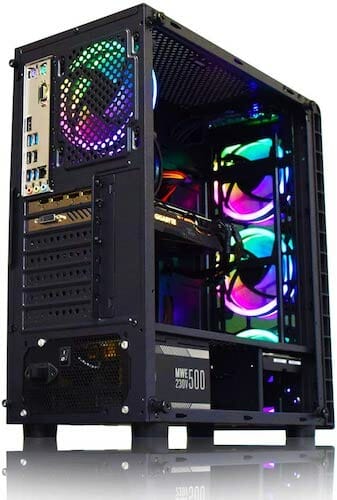 ADMI packs Intel’s Core i5-9400F (4.1 GHz) into our review unit, alongside 16GB RAM and 240GB SSD + 1TB HDD storage. This is a 9th generation CPU, that competes with AMD’s Ryzen 5 CPUs, and both chips are capable of running multi-threaded operations with ease. When not playing, you can use it for productivity tasks, including media editing, word processing and other tasks that need a machine with stable power output.

Since the ADMI PC comes with a spacious chassis, you can always throw in newer components, and benefit from more processing power and better gaming muscle. Also, since the same base model comes in various configurations, it offers you the rare advantage to configure your system before purchasing, based on your budget, and of course, gaming needs.

The ADMI Gaming PC is an excellent choice for a midrange prebuilt gaming desktop. It goes right into the mainstream curve with its all-aftermarket assembly, and it even covers everything with a tempered glass side panel. Down the road, you can swap out most of the parts.

On top of that, it’s real solid value. We found ADMI’s pricing for the model we’ve reviewed (ADMI AD-974-573-57EV16RD) is almost the sum of what it would cost to buy its bits on the open market, but you save on time.

The assembly work is neat, wiring is well done, making it even harder to argues the DIY route. Coupled with a Core i5 six-core processor and 16GB of memory, the ADMI Gaming PC is a true example of a midrange gaming desktop done right. 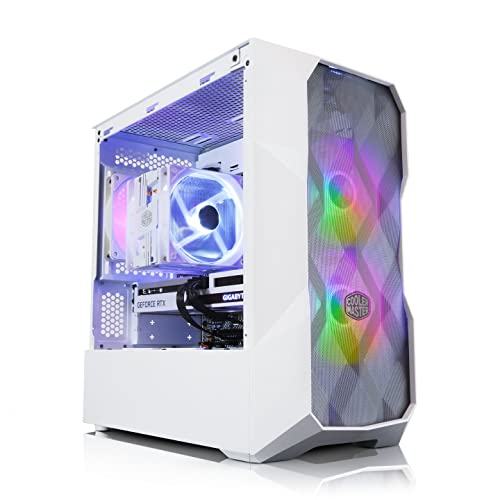