The Alienware Aurora R7 is the latest update in the Aurora line, offering even better gaming performance and a likeable tool-less design and powerful components that make it sit at the top of its class.

Nowadays, you can’t buy a more powerful gaming platform than a tricked-out desktop PC. They don’t come cheap, but at least they do offer great value for money and are semi-future proof for gaming enthusiasts.  One such system is the Alienware Aurora R7 (AWAUR7-7876SLV-PUS), a not-so-affordable gaming system, but Alienware made sure that it packs blazing speeds and premium components into an intricately designed build.

With enough muscle for smooth 4K gaming, and the latest hexa-core Coffee Lake chip to keep things running smoothly, the Aurora R7 a Top Pick for hardcore gamers and extreme multitaskers who need a general powerhouse that brims with excellence.

Alienware’s sleek-looking Aurora R7 is definitely one of the most attractive desktops you can buy, sporting the signature gray and customizable three-way LED lights on both sides that have become the stamp for every other Alienware machine. In fact, it picks up from where the beastly Area 51 stopped, with the same vented middle panels and ergonomic angles and the Alienware logo up front (that also serves as the power button).

Measuring 18.6 by 8.35 by 14.19 inches (HWD) it isn’t necessarily the most compact design around: But it isn’t big and bulky either. It does, however, get some heft with the 37.67 pounds, but you can easily lug it around thanks to an easy-carry handle at the top. The chassis is dotted with large exhausts allover and is further complemented by sizable air intakes on the sides and front, giving the system good airflow.

The design is great, but accessibility is yet another good thing about this system. The chassis features what Alienware calls a tool-less design, for easy upgradability. To take out the right-side lid, all you need to do is simply pull the lever in the back to reveal the power supply that’s attached to a panel with a hinge.

At first, it might look complicated but the only trick is to undo the two switches that hold the panel in place. After that, you can then swing out the power supply unit back and forth easily to access the other components including the processor, graphics card, motherboard and memory. On the back, you have three expansion slot covers that you can easily slip off as needed. 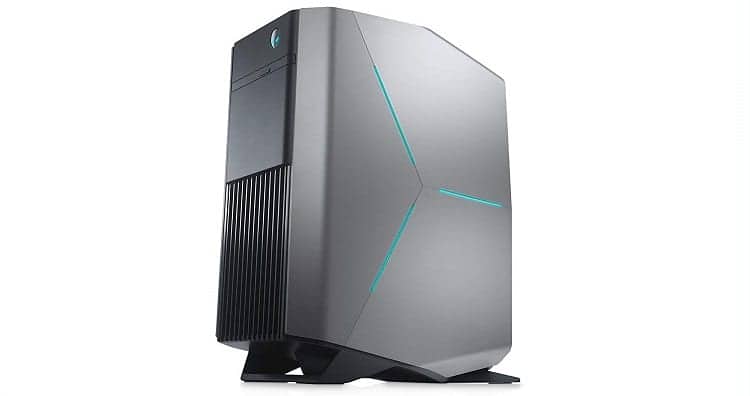 The new Aurora R7’s port layout remains unchanged from previous models, save for an additional USB-C port up front. With the new Type-C port, this system is at par with machines such as the Dell XPS Tower and MSI Infinite, with the new possibility of easily charging or connecting any of your USB-C peripherals. Others on the upper-front panel include three USB 3.1 ports and headphone and mic jacks.

The back holds an array of USB ports for all your needs, may be connecting a VR headset or any other gadgets, including: six USB 2.0 ports, four USB 3.1 ports and an additional USB-C port. There’s also a full suite of audio ports, and Ethernet port, and an S/PDIF jack for your optical audio gadgets. Also, on the Nvidia GeForce GTX 1080 graphics card, there is a HDMI port and a trio of DisplayPort connections for multiple-display connections.

We have come to like Alienware’s Aurora for easy of upgradability and the same aspect is at play here. As mentioned, the desktop’s side panels pop off with a quick pull lever, and once inside, you simply slide the power supply and remove the graphics card, storage drives and RAM, all without using even a single tool. For those who enjoy tool-free tinkering, this must be the tool of choice.

The excellent processor, high-end GPU and tons of RAM gets you into business. As specced, it looks like the Aurora R7 doesn’t have any faults, no matter how much you try to pinpoint them starting with the design to the components used.

As you pile tasks, the Intel Core i7-8700K is always willing to take up more. This hexa-core CPU belongs to the latest eighth generation (codenamed Coffee Lake) of processors, a step up from the quad-core processors that powered Alienware’s previous iterations of the Aurora. For everyday multitasking, it is the best any professional can have as it lets you open over a dozen browser tabs, a couple of game downloads and a video encoding in the background without slowing down.

It is an unlocked CPU, meaning that you can overclock it to get even faster speeds –but I haven’t seen the need to do that on this machine as it powers through demanding games effortlessly. Then there’s the GeForce GTX 1080, Nvidia’s flagship high-end GPU that the company bills to deliver up to three times better performance over its predecessors. Its 8GB GDDR5X memory is yet another boost, that ensures that you get buffer-free and faster loading games while at the same time eliminating any noticeable latency.

The Aurora R7 makes a strong showing on Rise of the Tomb Raider, rendering the game at over 86 fps at 1080p with all settings maxed out. This is slightly behind the GTX 1080Ti-powered Origin Chronos’ 96.1f ps, but it tops the Corsair One’s 73 fps, which uses the same GTX 1080 GPU and still above the desktop average of 54 frames per second. The same game played at 4K resolution, the Aurora R7 managed 29 fps, which is below the 30 fps standard in the same resolution.

Being a VR-Rady system, the Aurora R7 maxes out its guts on the Steam VR Performance Test, with a score of 11 against the 10.2 average for gaming PCs. It is a score that we only see in high-end gaming systems, and glad that Aurora joins the pack dominated by Omega and One.

Storage comes in way of a 2TB hard drive and 32GB Intel Optane, which is a solid, yet affordable. Configuration as compared to having a high capacity solid-state drive. While Optane Memory isn’t a replacement for a true SSD, it offers a way of rejuvenating traditional spinning drives and giving them SSD-like performance, without spending too much.

At first, Optane Memory might sound like RAM, but it’s in fact a specialized storage solution that connects to the M.2 storage slot (PCIe Gen 3.0×2) on a PC motherboard. It is available on the latest motherboards, first designed for Intel Kaby Lake (7th Generation) processors alongside the 200 series Intel chipset.

The Aurora R7 includes 32GB of intel Optane Memory paired with 16GB DDR4 RAM (max 64GB), which is quite a boost to the 2TB 7200RPM hard drive storage. That’s more space that similarly priced systems, and the inclusion of an Optane memory module counts for much at this price range.

In 2018, the Alienware Aurora R7 is an excellent fusion of design, power and upgradability you can get for the money. Granted, it is not the cheapest gaming desktop available, but it does offer great value, and that’s what really matters more. The chassis is slick with customizable LED lighting that stands out in your command center, and it is seamlessly easy to upgrade the internals to make it future proof for the technically adept gamers.

For a system that supports Intel’s 8th Gen Core processors and the Nvidia GTX 1080 graphics card, we’re hard-pressed to identify a fault for the obvious reason of nothing being perfect. In the case of the Alienware Aurora R7, it may take a sweat to find a fault here.

This gaming machine is adorable, gorgeous (in and out), not necessarily for gamers but also for the power user. If you’re in the market for an attractive, LED-backlit gaming PC that you can expand into something big in future, the Aurora R7 gets to the echelon where few machines can. 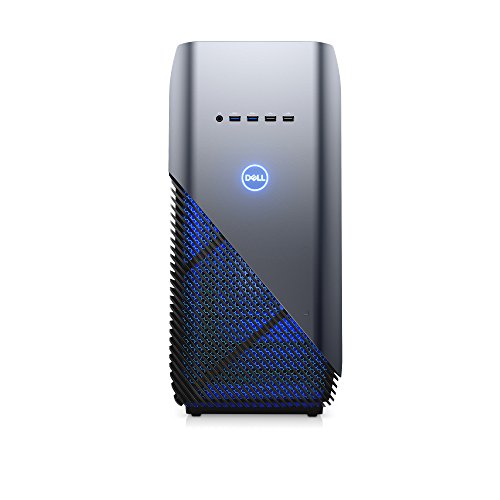