The Alienware m15 R7 is what gaming laptops need to be in 2022 and beyond. That’s not to say this RTX 3070 Ti machine is perfect, but it does deliver everything you’d need for a thrilling, portable experience, and very little that you don’t. From its powerful components to its tasteful black chassis, to its comfortable keyboard, the m15 R7 will let you play all your favorite games – in 4K if needed – no matter where you want to set it up.

When we reviewed the Alienware m15 R6 last month, we loved it for its solid gaming and productivity performance, as well as a high refresh 240Hz screen; now the m15 R7 comes to fill some big shoes already set by its predecessor. Thankfully, the new Alienware looks set for the big task ahead and looks like a well-rounded 1440p gaming machine with a shiny 12th gen Intel processor and RTX 3070 Ti at its core.

At first glance, the m15 R7 looks as sleek as every other Alienware laptop released in recent years; a signature indented screen hinge, a long ring of RGB lighting at the rear edge, and that iconic alien-head logo illuminated in vivid blue on the lid. This is a tried and tested design that has persisted over the years, and we can’t blame Dell for sticking with it – after all, if it isn’t broken yet, don’t fix it.

Admittedly, there are a few areas I just wish the m15 R7 had done differently. By default, the fan is fairly loud, and the chassis itself isn’t the most portable, but the killer stroke is the huge, heavy power adaptor. Since the m15 R7’s battery life is unimpressive, you’ll need to carry along this brick with you in addition to the laptop itself, rendering Alienware m15 R7 less appealing for gamers on the go.

Still, taken as a whole, you’ll be impressed by everything this laptop has to offer. If you have the money to spend on this machine, it’s easily one of the best Windows laptops for gaming and decidedly one of the best gaming laptops you can get, particularly since the state-of-the-art hardware should last you a long time. And, with the powerful components, it is well suited as one of the best laptops for engineering students.

As mentioned above, the overall design of the Alienware m15 R7 hasn’t changed much here. You’re still getting the Alienware logo illuminated on the back of the screen, and another one that doubles as the power button; there’s also a large ‘15’ etching that takes a bigger part of the lid, and a hexagon-patterned grille for the speakers and intake above the keyboard. The chassis is made of plastic, we can’t ask for more though, and it still looks good and sturdy to last for a few more years.

The 15.6-inch screen has a 240Hz refresh rate, and we can say it’s a good screen all around. It has great maximum brightness, color reproduction is splendid – while it isn’t necessarily the absolute best we’ve seen in a gaming laptop – it is, nonetheless vivid and clear. There is a 1080p version with a 360Hz refresh rate on certain SKUs if a higher refresh rate is more important to you.

As with all Alienware gaming laptops, the keyboard is pretty good, with a good amount of travel (around 1.8mm) on the keys, meaning you can type comfortably and mistypes are kept to a minimum. The keyboard has a tiny amount of flex, only noticeable if you press very firmly keys in the center, but that’s expected given the plastic construction. The trackpad is small but is very responsive and you’ll likely be using a mouse for gaming anyway.

For physical connectivity, the m15 R7 has three USB-A ports, RJ-45 Ethernet, an HDMI port, a headphone jack, and a Thunderbolt 4 port. Also, we’ve got Wi-Fi 6E and Bluetooth 5.2 built-in, which is a new standard inclusion for gaming laptops these days.

This is where the choice to sacrifice building materials pay off. The Alienware m15 R7 is powerful and can drive most modern games with ease. With our review unit running a 12th generation Intel Core i7-12700H processor and RTX 3070 Ti, it easily scales well over 60fps on the highest settings across modern AAA titles that you’d want to play.

Even stress testing the m15 R7 with an intensive Red Dead Redemption 2 still yields incredible results – 77fps on average with Ultra textures and every setting set to max. That kind of performance easily bests even the RTX 3080 Ti on the Razer Blade 15, with an Intel Core i9 processor at the very top, no less.

Elsewhere, Ray-tracing in Cyberpunk 2077 will see performance take a hit, but it should take a little tweaking in the settings to dial your graphics down a little and everything will remain above 60 fps. Since this particular model – the AWM15R7-7730BLK-PUS – comes with a 1440p display, RTX 3070 Ti runs smoothly, but the lower-powered GPUs in the 1080p model are likely to struggle a bit more at this resolution (though DLSS is still an option of course).

Synthetic benchmark tests portray solid performance, too; with the RTX 3070 Ti delivering decent scores on the 3DMark suite tests. This is partly due to Intel’s nifty performance/efficiency core design, present in the Core i7-12700H which is at the heart of the Alienware m15 R7, which also means that CPU-bound tests like Geekbench 5 are equally impressive.

The thermal design at play here is solid, as the chassis doesn’t get more than a bit warm. If you look after this laptop well, it should last for years without thermal issues degrading the lifespan of internal components.

Of course, with top-notch heat dissipation, something has to give. Sadly, that had to be the cooling fans. The m15 R7 has some of the noisiest fans we’ve seen in our many years of testing and reviewing gaming laptops. The fans not only kick in during extreme gaming sessions but also during basic tasks like browsing Chrome or shifting through the Windows settings. In short: just invest in a good pair of gaming headsets.

We’ve seen gaming laptops like the Asus ROG Zephyrus G14 last well over 8 hours on a single charge, but the Alienware m15 R7 still adheres to the same old lackluster battery life. It comes with an 89Whr battery that lasts barely more than three hours in tests, and that’s with all the vestigial RGB lighting shut off to conserve power.

Away from gaming, video playback fares a little better, almost clocking four hours, meaning that you should be able to at least watch a movie without having to lug in provided you start with a full charge. Gaming, though, with all eye candy maxed, is less likely to give you anything more than 2 hours before you need to connect that hefty AC adapter. Sure, plenty of gaming laptops are the same, but we’ve also seen better.

While I wish the fan were a little quieter, the battery lasted a little longer and the power adapter were smaller, these are ultimately acceptable sacrifices in a machine that’s designed primarily with home gaming in mind. Should you decide to invest in an Alienware Graphics Amplifier and use the m15 R7 as an ersatz desktop, so much the better.

If you want an Alienware laptop that you can take out and about, the Alienware X15 R2 is a much better option, It retains the same great gaming performance and stylish design of other Alienware laptops, but wraps it up in a far more portable chassis. If on a tight budget, the Asus TUF Dash 15 is a far more wallet-friendly option than most Alienware laptops, and the Dash F15 packs quality gaming components inside a basic-looking but impressively thin and lightweight chassis.

That said, the Alienware m15 R7 remains a capable gaming laptop that brings power previously only available in the form factor of a desktop. It’s not cheap. But that’s okay. It remains a tool for professional gamers, podcast editors, and engineering students, and it was built with their needs in mind.

Should you buy the Alienware m15 R7?

If you love high framerates and want to game at high settings. YES. The Alienware m15 R7 is a dream gaming laptop for esports gamers, allowing them to hit incredibly high framerates in modern AAA titles where speed means everything. 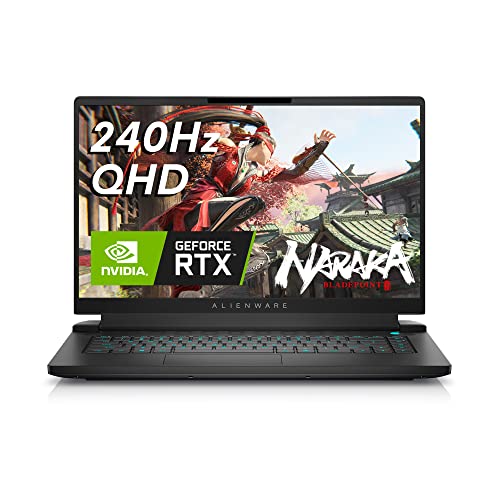