The Alienware X15 R2 is a thin, beautiful gaming laptop that’s quite simply among the best on the market right now with best-in-class performance and a design that sets it apart in all the right ways.

The Alienware X15 R2 once again proves that Alienware – the hardcore arm of Dell is still king when it comes to making the best gaming laptops.

The X15 R2 boasts some of the best gaming hardware you can get into a sleek, well-designed package that will impress anyone looking for the ultimate gaming look, that’s simply unique from the rest. The laptop itself is remarkably thin for a gaming laptop this powerful, and the distinctive layout manages to rope in the variety of ports just about any gamer would need out there.

That said, to keep the Alienware X15 R2 within reach, compromises had to be made somewhere, and that had to be the limited number of ports. In this case, you get pretty much one of each, meaning if you’ve got two USB-A devices you wanted to connect, well, you’ll need a USB hub or adapter to lug in whatever peripherals you want to plug in.

Meanwhile, apart from the number of devices you can plug in, don’t expect to spend too much time away from a power outlet.

The X15 R2 model we’re reviewing maxes out at 1080p, but there’s another model that maxes out at 1440p, so you got both options for gaming on the go, but expect to spend top-dollar for the highest specification. For 15.6-inch screen size, though, you might not readily notice the difference, especially with the 1080p display’s excellent refresh rate (360Hz) and response time (1 ms).

Speaking of price, the X15 R2 isn’t the cheapest gaming laptop out there. However, compared to its rivals with similar specs, it is at least a little more accessible, but the highest-end configuration is one of the most expensive gaming laptops out there.

Still, if you can afford the Alienware X15 R2, you’re going to invest in one of the best gaming laptops ever made, whether you plan to use it for gaming on the go, content creation, or just anything in between – it punches above its weight to run everything throw its way smoothly.

The new Alienware x15 is all about being thin. At 0.6-inches, it’s in the same ballpark as the Razer Blade 15 Advanced, while the width at 14.16-inches is normal for a 15.6-inch laptop. However, the x15 is deeper than most at a measured 10.9-inch. The design language is Alienware through and through, with the usual design cues from Dell’s signature look, down to the hexagonal grille above the keyboard, the Alienware logo power button, and the matching logo at the back of the lid.

However, the design is cleaner now, with the fairly cheap-looking gloss strips of the Alienware m15 R7 replaced by a wholly matte finish. The inset hinge, which sits a few inches from the rear of the chassis, is still the showstopper here. Sadly, it doesn’t get a fingerprint scanner, although the webcam is now much improved and supports Windows Hello IR face recognition.

The magnesium chassis is part aluminum, and part ABS plastic body that makes for a sturdy and robust machine, while the black and white color scheme – Alienware calls it Lunar Light – is very beautiful. It’s not the lightest gaming laptop around at 5.2 pounds; the Razer Blade 15 Advanced tips the scales at just 4.4 pounds.

Well, port selection isn’t overly generous, with only one 3.2 Gen 1 Type-A USB port, one 3.2 Gen 2 Type-C, and one Type-C Thunderbolt 4 port (at least you get one of each). There’s also an HDMI 2.1 port and a microSD card slot, and Alienware does include a Type-C Ethernet adapter.

The keyboard is quite spacious, solid, and responsive, with a 1.5mm key travel and per-key RGB LED lighting. Perhaps, my only qualm with the keyboard s that the backlight doesn’t fully illuminate any of the secondary icons on the keys. The touchpad isn’t the largest I’ve used, measuring 105 x 60mm, nor is the corner click-action the snappiest.

Like any other gaming laptop, you can put on a decent light show, thanks to the Tron LED that circles the base of the laptop and the Alien head on the lid. You can set the lighting effects to throb and pulse in various rhythms.

The Alienware x15’s IPS display is a marvel to look at. The Full HD (1920 x 1080) panel and maximum 360Hz refresh rate should satisfy any gamer. It’s colorful too, with 107% sRGB gamut coverage. Brightness maxes out at a reasonable 388 nits and the contrast ratio is acceptable. Simply put, the display looks beautiful when playing visually adept games and watching content from your favorite streaming channel.

The Alienware X15 R2 is one of the few gaming laptops to feature Nvidia’s Advanced Optimus tech, though it’s only available on the 240Hz QHD and 360Hz FHD models. This works like regular Optimus but benefits from simultaneous G-Sync support. As for normal Optimus systems, they would have to sacrifice G-Sync or require a Multiplexer switch and system reboot to switch it.

On the x15, advanced Optimus does this on the fly. A little window pops up at the lower left of the screen to tell you that GPU activities have been handed over to either the Nvidia GPU or integrated Intel Xe GPU.

The audio system is more of a mixed bag. The overall audio landscape is rather lacking in bass, which can make music a little tiring to the ear. On the flip side, gaming sound effects are rendered with satisfying clarity, and the two 4W speakers generate an impressive amount of stereo separation.

Our configuration of the Alienware x15 R2 packs a 12th Gen Intel Core i7-12700H and an Nvidia GeForce RTX 3070 Ti with 8GB of GDDR6. The GPU has a max of 140W of power. There isn’t much else to say here, other than the x15 R2 has just about the best gaming performance of any gaming laptop we’ve tested recently.

Whether it’s the Intel Core i7-12700H CPU or the RTX 3070 Ti GPU, the Alienware x15 easily beats out even some heavy hitters like the Gigabyte Aorus 17x, which uses an unrestricted RTX 2080 GPU, so is capable of running at a much higher wattage than just any mobile GPU on the market.

Even stress testing the x15 R2 with an intensive Red Dead Redemption 2 still yields incredible results – 77 fps on average with Ultra textures and every setting set to max. That kind of performance easily bests even the RTX 3080 Ti on the Razer Blade 15, with an Intel Core i9 processor at the very top, no less.

With a Core i7-12700H chip, 16GB RAM, and 512GB SSD storage, the Alienware x15 R2 is always going to deliver solid productivity performance. The first key to its impressive performance has to be its “Advanced Alienware Cry-Tech” cooling system which involves four fans and something called gallium-silicone thermal interface material – which draws heat away from the CPU and GPU more efficiently than any other substances with less exotic names.

The second option goes down to the ability to marginally overclock the processor and increase thermal thresholds via the Alienware Command Centre. The short and tall of it is the Alienware x15 punches harder, rather surprisingly, quieter than most high-power notebooks. You can run most productivity tasks, media creation and editing, stream content and open multiple browser tabs without slowing down this machine.

We’ve seen gaming laptops like the Asus ROG Zephyrus G14 last well over 8 hours on a single charge, but the Alienware X15 R2 still adheres to the same old lackluster battery life. It comes with an 87Whr battery that lasts barely more than three hours in tests, and that’s with all the vestigial RGB lighting shut off to conserve power.

Away from gaming, video playback fares a little better, almost clocking four hours, meaning that you should be able to at least watch a movie without having to lug in provided you start with a full charge. With all eye candy maxed, gaming is less likely to give you anything more than 2 hours before you need to connect that AC adapter. Sure, plenty of gaming laptops are the same, but we’ve also seen better.

The Alienware X15 R2 is a beautiful, super-thin gaming laptop with a top-notch display than most gaming laptops we’ve reviewed. That’s pretty much all most potential buyers will need to know.

Meanwhile, the port selection would be wider and the keyboard backlit could light all of the key labels, but I think these are ultimately rather minor quibbles. None of this holds back a notebook that incrementally improves your gaming experience, and if performance is at the top of your laptop-buying agenda, there’s simply no better choice out there. 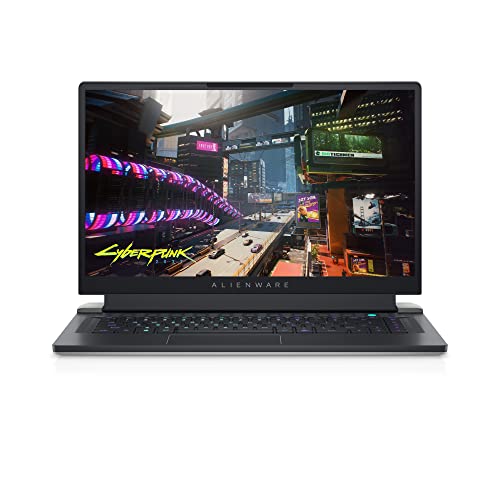 Should you buy the Alienware X15 R2?

Buy it if you need a stylish laptop that is powerful and doesn’t sacrifice performance for some cool design. The Alienware X15 R2 is a solid choice that’s as powerful a gaming laptop as you’re going to find out, making this an ideal gaming laptop for competitive gaming.