The Amazon Fire TV 4-Series is a good choice for Alexa aficionados on a budget. It offers good value for the buck for anyone just getting into 4K TV or anybody looking to expand their Alexa capabilities without spending too much.

Amazon has been around our homes for a while, letting affordable TV manufacturers use its proprietary software, but only recently has the company started selling its own, Amazon-made TVs designed to be the hub of an Alexa-connected living room. The Amazon Fire TV 4-Series is a 4K TV that offers Alexa smart platform for people on a budget, and just like the Amazon Fire TV Omni (we reviewed it recently), it succeeds at what it’s designed to do.

The Amazon Fire TV is part of the new Amazon-branded TVs, it’s not the only one available, but it’s the most affordable in that lineup. The Fire TV 4-Series isn’t the best budget option for people shopping for a TV under $500, it’s a little dim for bright rooms and its off-angle viewing is underwhelming.

But if you’re upgrading to 4K for the first time, or you simply don’t care about the new innovations in TV language, the Amazon Fire TV 4-Series is an affordable TV that will look good whether you’re streaming movies or watching cable TV – you can also do some casual gaming.

That said, competitors like the Hisense H8G offer the best 4K TV viewing experience, including full array local dimming and support Dolby Atmos and Dolby Vision HDR. It remains our Editor’s Choice for 4K TVs under $500.

About the Amazon Fire TV 4-Series

The Amazon Fire TV 4-Series is offered in just three screen sizes. We’re reviewing the 50-inch models, which sit in the midst of the smaller 43-inch and the larger 55-inch. Here’s how the 4-series stacks up.

With sizing out of the way, you can expect the performance to be uniform across the range. Let’s look at the specs shared by each size in the series:

All set in the Amazon 4 Series comes with Amazon’s Fire TV Alexa Voice Remote. It’s a slim, simple remote with dedicated app buttons for Netflix, Hulu, Amazon Prime Video, and Disney+. As the name says, it gets a built-in microphone for Alexa commands at the top of the remote.

Connectivity is only useful for daily use, and not the kind of cutting-edge hardware you’re likely to find on higher-end TVs, so A/V enthusiasts and serious gamers should be aware of the 4-Series’s hardware limitations. It does offer HDMI 2.1 port but the hardware is limited to 4K/60Hz.

The TV’s HDMI 2.1 input also supports eARC, which allows you to pass Dolby TrueHD and Dolby Digital Plus audio signals directly to a receiver or soundbar, provided the chosen device can also support eARC. Remember, the TV itself doesn’t decode Atmos natively.

Here are all the ports you’ll find on the back of the 4-Series panel:

When shopping for a TV in the budget category, some significant performance issues are pretty much worth taking into account. Picture quality and color performance are top in the list, and the Amazon 4-Series scores well in those areas. Despite the TV’s limited hardware, which includes a lack of any local dimming, the picture quality remains mostly decent for casual viewing, be it streaming broadcast TV, or Blu-rays.

However, that doesn’t say that the 4-Series is picture-perfect; it lacks some key tech that means its performance is permanently fixed to the lower end of the market spectrum. But if you need the latest tech on a TV – quantum dots, mini-LEDs, or even full-array local dimming, you’ll have to spend more in the next price bracket.

Still, for what it costs, the Amazon Fire TV looks fine. Colors are well-tuned right out of the box, especially if you select the TV’s “Movie” picture preset while watching videos, and the fantastic deep black levels anchor a detail-rich picture. Also, if you’re just leaping 4K resolution for the first time, the 4-Series isn’t a good option as well.

The Fire TV Omni comes with an on-board, far-field microphone that offers users the option of accessing Alexa in a hands-free manner, the 4-Series keeps Alexa access limited to the remote control’s built-in microphone. If you need that feature, simply hook up the 4-Series to an Amazon Echo speaker, and you’re open to a secondary point of access. Again, two-way video calling, which wasn’t yet available on the Omni when we reviewed it, is also not supported on the 4-Series.

Too dim for bright rooms or HDR

As mentioned, the Amazon 4-Series lacks the latest display tech and that makes this TV a favorite among budget buyers. However, the lack of that tech puts cinephiles or anyone with a sunny living room at a disadvantage. In a brightly lit room, the 4-Series lacks the oomph to get very bright, and without even a modest amount of punch, the picture will look dull in bright environments.

And while the 4-Series supports High Dynamic Range (HDR), it doesn’t get brighter or more colorful in HDR, meaning anything mastered for that format – whether it’s viewed from Netflix, YouTube, or a UHD Blue-ray, won’t look any different, even if the TV says it’s receiving an HDR signal.

Also, while the 4-Series is a better rendition of Alexa TV than just about everything else out there, it’s nothing close to being one of the best smart TVs you can get – even at the affordable price. My main issue with Fire TV OS is its abundance of sponsored and recommended content, most of which you cannot disable. If you’re looking for an ultra-affordable 4K TV, look no further than the 4-Series, but the TCL 4-Series Roku TV offers better picture quality and smart features at is easy to use with extensive app support.

Should you buy the Amazon Fire TV 4-Series?

If you’re an ardent Alexa-user looking to expand your Amazon ecosystem, the Fire TV 4-Series is a good choice. It’s especially a good choice if you love the idea of incorporating an affordable, Alexa-friendly TV into your smart home setup or just getting into a 4K TV experience.

On the other hand, the picture quality isn’t the with the Amazon 4-Series, but that’s not to say it’s any better on the TCL 4-Series – they’re both hampered by a lack of brightness and sub-optimal viewing angles. But the TCL 4-series arrives with Roku built right into the software, and if you’re not roped into Alexa, Roku is a better option due to its streamlined interface and little sponsored content. (Roku also incorporates Alexa support, but not to the same degree as Amazon’s models).

Overall, the Amazon Fire TV 4-Series is a good choice for Alexa aficionados on a budget. From a performance standpoint, the 4-Series has an almost similar experience as the high-end Omni Series, but the 65- and 75-inch versions of the Omni offer Dolby Vision HDR format support.

Still, the Amazon Fire TV 4-Series is an enticing pick for a very specific niche, especially folks on a budget, but it’s people with an Amazon-connected home who’ll get the most out of it. 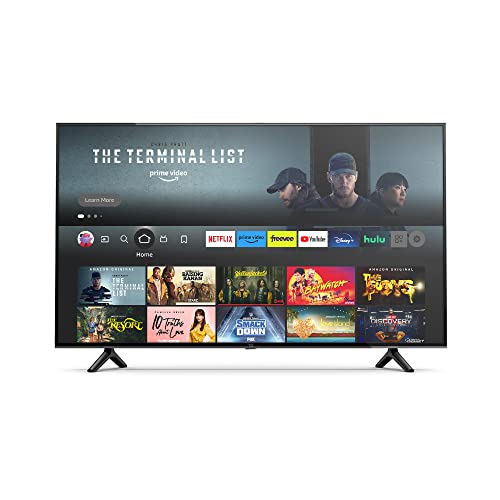