It is never easy to escape being caught in the rhetoric whenever a new Apple system hits the stores, but the Apple iMac with Retina 5K display silences critics by offering something nobody else has: a potent all-in-one desktop with an unparalleled 5K screen.

Every once in a while, a gadget completely resets the curve. Once I thought it was safe to get comfortable wearing my good, expensive headphones, I suddenly couldn’t even tolerate Apple’s Earpods anymore. And now if you thought its safe to get comfortable with the look and language of 4K, Apple has one more hot thing — and the new hot thing is not a repackage version of an old thing.

In the latest iMac, Apple wows with a feature no one else in the industry has matched this far, bringing the Retina display to the desktop with a stunning 5K resolution. The 27-inch iMac with Retina 5K display is not only dazzling from that standpoint alone, but solid performance and an uncharacteristically affordable price round the package. It’s the system to get for video, photography, and graphics.

Officially called the Apple iMac with Retina 5K display , Apple’s newest desktop is designed for photographers and videographers and anyone who wants to look at their computer quite differently. In the recent past Apple have shifted mainstream focus on laptops and tablets, but the desktops have remained a province of professionals, and they have truly become faster and astoundingly more powerful machines. The iMac with Retina 5K display, a beast of a consumer desktop, fall right in line.

Let’s start with the most outstanding feature —the 5K display—since it overshadows pretty much everything else in the iMac. The 27-inch 5K display isn’t just good, it’s overwhelming. With a maximum resolution of 5,120-by-2,880, it blows past 4K (3,840-by-2,160),packing never-heard-of 14.7 million pixels. Compared with the 2,560-by-1,440 Apple iMac 27-inch (Intel Core i5-4670), the difference is day and night.The screen uses tech borrowed from the Retina iPad to reduce pixel crosstalk and maintain sharp images on the new oxide-based TFT. Although the panel is just as bright as the previous-gen, according to Apple it uses 30 percent less energy.

Aside from the upgraded and revamped display, the signature iMac design is relatively unchanged in the iMac 5K Retina display. in fact, when the display turned off, the new 5K iMac can sit side-by-side with the old models and the two are impossible to set apart, without even a slight change in port labels to indicate which is which. Apple maintained the sleek aluminium design at only 5mm at the edges, with a bulge in the back to accommodate larger components and the firm hinges of the L-shaped stand. At this point, one design complaint becomes inevitable, the single hinge stand lets you adjust the angle of the display, but not the height.

Still on the design, in the back is a small access panel —opened with a button that is concealed when the desktop is plugged—that offers the only user access inside the iMac chassis.

It comes with 8GB of RAM 1600MHz DDR3 memory(two 4GB RAM sticks filling two of the four slots); but you can add more to a maximum of 32GB total.Just like previous iMacs, Apple placed all the ports on the backside of the display, including a headphone jack, an SDXC card slot, four USB 3.0 ports, two Thunderbolt 2 ports, and a Gigabit Ethernet port. However, unlike other iMacs, there is no option to use the Retina 5K display as an external monitor for another Mac.

On the inside, the iMac has 802.11ac Wi-Fi and Bluetooth 4.0 for wireless connectivity. It also comes with Apple’s Fusion Drive, which is a branded twist on drives that pair spacious hard disk storage with smaller, but faster, solid-state drive (SSD). Although the Fusion Drive option isn’t a new feature here, the but the 1TB (1TB hard drive + 120GB SSD) is standard issue here.It features 3.5GHz quad-core Intel Core i5 processor and AMD Radeon R9 M290X graphics processor with 2GB of GDDR5 memory. 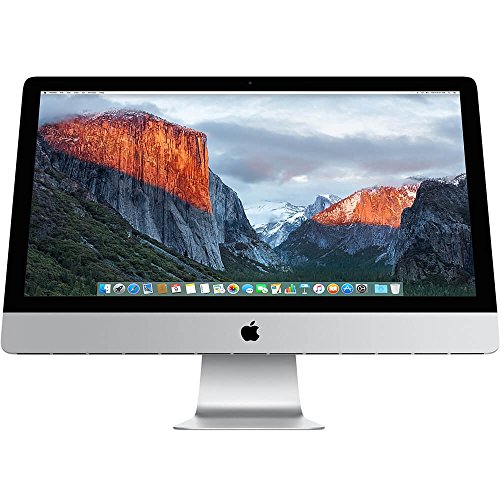 On the iMac you’ll find the latest version of Apple’s OS X Yosemite. The tenth version of OS X, the new operating system has numerous tweaks and refinements over the previous Mavericks, from a new flattened look to deep integration with iOS 8. You also get iLife (which includes iPhoto, iMovie, and GarageBand) and iWork (which consists of Pages, Numbers, and Keynote), along with apps like FaceTime, Safari, and iTunes. Apple covers the iMac with a one-year warranty, plus 90 days of free phone support. AppleCare is available for purchase  for longer-lasting coverage.

It is never easy to escape being caught in the rhetoric whenever a new Apple system hits the stores, but the Apple iMac with Retina 5K display silences critics by offering something nobody else has: a potent all-in-one desktop with an unparalleled 5K screen. While there are plenty of 4K and 5K displays coming along to compete with it, the iMac is here first, and at a price that’s surprisingly affordable for professionals. As touch enthusiasts stick to Windows systems, more demanding professionals will prefer a full-fledged workstation, if you need a reliable workhorse for video and photo editing needs, nothing matches the new iMac. As such, it is our new Editor’s choice in the category of high-end all-in-one desktops.