Now you have a too-big iPhone, a too-small iPhone, and a just-right iPhone in the market: the iPhone 6 Plus. The newest entrant into the iPhone family’s biggest feature is that its bigger and it has a bigger screen, and yes, that’s a big deal. Although most developers have not coded to take advantage of the iPhone 6 Plus’s additional real estate, the new phone takes Apple’s beloved operating system and third-party apps into a stellar body that no longer looks and feels cramped.

In this iPhone 6 Plus review, we are looking at a beautiful matte metal finish, just like its smaller version the iPhone 6. The new thinner case makes the iPhone 5 and 5s feel downright chunky, which is incredible. New to this generation also is the all-metal back casing which replaces the top and bottom panels with thin connecting seams. The iPhone 6 Plus feels more comfortable in your hands vs. the iPhone 4, 4s, 5 and 5s, all of which preferred straight edges to the 6 Plus’s sloping edges.

Apple has maintained its premium feel. Compared with other phones, the iPhone 6 Plus feels classier and made from more expensive, if not tougher materials. The slim and rounded design makes it slip easily in and out of any pocket.

Any iExperienced person will notice that apple finally moved the power button from the top to the right, after many years. Apple says that the A8 processor scores well in battery life than speed, and I hope its just true. iOS 8 still gives you a closely curated interface with seamless integration with Macs, especially with the new Handoff/Continuity feature (Windows users don’t get that). It uses Touch ID and phone calling performance is always just okay in iPhone.

The iPhone 6 price will determine if you’re getting the 16GB, 64GB or 128 GB variants. For many, the 64GB is obviously the sweet spot, but you can still consider larger storage. The 6 Plus features an 8-megapixel main camera and a 1-megapixel front camera. Interestingly, the main camera is enhanced with optical image stabilization (IOS), a shibboleth of a feature designed for enhanced low-light photo performance reducing jitter (and thus blur) at low shutter speeds.

Figuring out the ideal size of a phone (specifically iPhone) is a delicate balance. Back in 2001, it was easier to judge larger versions such as the 4.65 Samsung Galaxy Nexus as being too large for some hands, but over the years screen size has defied the odds. So while the iPhone 6 Plus is larger, it just feels just right on the 5.5-inch, 1,920-by-1,080 Retina LCD screen running at greater densities than previous iPhone screens. The 2,915mAh battery in the iPhone 6 Plus is by far bigger than the 1,810mAh battery in the 6, and hopefully the bigger size will keep it juiced for longer.

Now I realize screen size isn’t the problem, it is the overall phone width, which needs to be preferably narrow enough for people with small stubby fingers to grip properly. Narrower bezels have given us smaller phones with larger screens, so everybody wins here. If shopping around, you can now find the iPhone 6 cheapest price but the newer variant, iPhone 6 Plus looks much better and will cost slightly more. At 6.22 by 3.06 by 0.28 inches (HWD) and 6.07 ounces, its longer and wider than most competitors but narrower than most of them. Focusing on narrowness rather than shortness is a score for apple. What makes phablets unwieldy is not how long they are, but how wide. 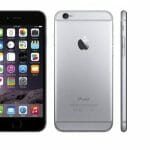