The latest Apple Mac Mini MGEN2LL/A has more competition to walk through than its predecessor, but it still manages to hold its own, and then some. it is better connected than most Windows PCs, and pretty less expensive than popular gaming-oriented desktops with better multimedia benchmarks to boot.

The Apple Mac Mini is the least expensive Macintosh computer you can buy today. Like its previous iterations, its design features a sleek aluminium unibody chassis, making it one of the most compact desktop PCs on the market.

Although it comes at a relatively cheaper price, it still maintains performance stability and enough juice for Apple OS X we’ve come to expect. Trends in the desktop market make the Apple Mac Mini MGEN2LL/A the small-form-factor (SFF) consumer desktop to beat, thanks to a solid chassis, convenient connectivity options, and the latest Mac OS X Yosemite, all at a reasonable price.

Apple left the Mac Mini’s exterior unchanged from the previous model. It still maintains the matte-aluminum chassis measuring 1.4 by 7.7 by 7.7 inches (HWD), which you can conveniently hide behind a large-screen display or HDTV.Although other SFF designs are physically smaller, most of these Windows PCs often require external power cable that can easily clutter your workspace. The Mac Mini has built in power supply, it can easily go unnoticed on your desktop at the most.

In the newer Mac Mini Apple changed the default 4GB 1600MHz DDR3 memory to 8GB 1600MHz LPDDR3 memory, but introduced Intel Iris Graphics. It comes equipped with ITBB, 5,400rpm SATA hard drive. Note that like its previous Mac mini models, a display, a keyboard, and mouse are not included in the bundle.

Also absent is the previous Mac mini iteration’s accessible memory option, since the chassis is pretty sealed now and the RAM is soldered to the motherboard. Basically, you won’t upgrade the RAM later, even if you’re persistent in opening the case, unless you choose extra memory when ordering the system.

The Apple Mac Mini MGEN2LL/A features connectivity options that are slightly above standard, including an Ethernet port, an HDMI port, an SDXC card reader, two Thunderbolt 2 ports, and four USB 3.0 ports.For seamless wireless connectivity, it comes handy with 802.11ac and Bluetooth 4.0, in addition to Apple‘s Continuity and Handoff features available in OS X Yosemite, which allow you to hook the Mac Mini with iOS devices devices, like iPads and iPhones.

The Mac mini is powered by a fourth-generation 2.6 GHz dual core Intel Core i5-4260U, a low-voltage processor with Intel HD Graphics 5000. This features can deliver quite stable performance on multimedia, which is quite faster than most mainstream desktops in the same price range. The integrated graphics are decent enough to help the system score 17 frames per second (fps), meaning can easily play browser-based 3D games and older titles. Unlike most of its competitors, the Mac mini is a whole lot quieter, though.

The latest Apple Mac Mini MGEN2LL/A has more competition to walk through than its predecessor, but it still manages to hold its own, and then some. it is better connected than most Windows PCs, and pretty less expensive than popular gaming-oriented desktops with better multimedia benchmarks to boot.

As it stands, its only drawback is the lack of internal memory expansion, something that is becoming commonplace among Macs and Windows PCs every day. A combination of gorgeous build quality, efficient connectivity options and an inexpensive price, the Apple Mac mini stands out as great competitor in consumer-oriented SFF desktops worth a long look as you shop around. 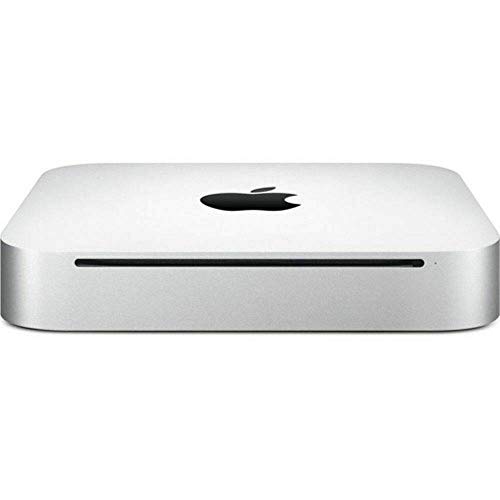