The Apple MacBook Pro 15-inch (Newest Version) earns its title as one of the best high-end desktop replacement laptops you can buy. It has the power of a desktop Mac, and the battery life to carry you through a full workday and beyond.

The Apple MacBook Pro 15-inch (Newest Version) is the Retina Display-enabled system that most power users have been waiting for. Just take last year’s Retina Display upgrade and add to it a thinner chassis, then add a powerful Intel Core i7 processor with integrated graphics that performs like discrete graphics, and what do you get?

Of course, a pinnacle of laptops designed for the über-picky power users who need to take their time-sensitive projects with them…and that’s the MacBook Pro 15 retina display. It gets a perfect slot in our latest Editor’s Choice winner for the Power Laptops (Desktop Replacement laptops), and one of the highest scoring systems ever.

The new MacBook Pro 15-inch looks identical to the previous, but more expensive, Apple MacBook Pro ME294LL/A (OLD VERSION), and it’s no wonder, since last year’s was a new design. The 2013 model packs the same aluminium and glass construction, it shares the same 15.4-inch, 2,880-by-1,800 resolution IPS display, and Apple maintained the same chiclet-style backlit keyboard in the newest model.

The Apple MacBook Pro MGXC2LL/A has a pair of speaker grills flanking the keyboard. The aesthetics are marked by a more balanced design, although some number crunchers may complain of the lack of a keypad for spreadsheet data entry. The signature Apple vents are maintained on the sides to let air flow though the base of the laptop, cooling the processor and batteries. A large multi-touch trackpad is centrally set and responds instantly to commands, As always, the keyboard is as comfortable to type on as previous models: it is solid, and is evenly backlit.

The Apple MacBook Pro MGXC2LL/A 15-inch (Newest Version) inherits the previous model’s excellent Retina display. The screen isn’t touch enabled, but then again, no one said OS X is optimised for touch, so you’ll hardly miss the touch option. Whats more, most of the apps have been optimised to take advantage of the Retina display than last year, so you’ll only encounter blocky looking UI if you use a really old version of a program.

Last year, the MacBook Pro’s 2,889-by-1,880 screen was novel, but it has been joined in by larger than 1080p resolutions by other systems like Toshiba KIRABook with its 2,560-by-1,440 resolution screen, and the Samsung ATIV Book 9 Plus (3,200-by-1,800). In all fairness, the Samsung ATIV Book 9 Plus wins the pixel count sweepstakes at this point, though we probably won’t hear too many high-end Mac users who complain about being short shifted.

The MacBook Pro’s 2,880 by 1,800 resolution screen is physically larger than the Samsung ATIV Book 9 Plus (15.4 inches vs. 13.3 inches, respectively), which explains the MacBook’s larger overall dimensions. on an external display, the new MacBook Pro 15-inch supports up to 4,096 by 2,160 resolution via HDMI. Perhaps the only nit I have with the Retina Display is its lack of a matte finish option, which somehow hit the bucket wen Apple recently discontinued the previous generation of MacBook Pro 15-inch models.

The system comes with 802.11ac Wi-Fi networking, but you’ll have to use a USB to Ethernet adapter or some Thunderbolt-based docking station to get wired Ethernet connectivity. One of the big news in the October 2014’s Apple event was the inclusion of the updated Apple iLife and Apple iWork software suites along with Apple OS X 10.10 Yosemite, Apple’s updated operating system for Macs. This means that you can use the new MacBook Pro 15-inch right off the bat with fully functional business, content creation, and entertainment software suites. This flies in the face of systems that come with Microsoft’s Windows 8 and 8.1 OS, which don’t include Office, unless you count the time-limited trial you get with every new PC.

The Apple MacBook Pro is powered by the latest fourth-generation Intel Core i7-4750HQ processor combined with Intel Iris Pro 5200 graphics, all of which are an improvement over the previous model with a third-generation Core i7-3615QM processor. It comes with 512GB of Flash storage, now PCIe-based instead of the common SATA based, which is quite helpful in speedy file transfers and app load operations.

The other additions to OS X 10.10 Yosemite work well, so does the built in 720p FaceTime HD camera.The new MacBook Pro 15-inch has a new dual microphone array to help with FaceTime conversations. The MacBook Pro 15-inch (2013) comes with a standard one-year warranty with 90 days of 24/7 technical support. The Intel Core i7-4750HQ processor has Intel Iris Pro 5200 graphics built in.

This quad-core processor is speedy and energy efficient. What’s notable about the Iris Pro graphics is that the new MacBook Pro 15-inch is able to almost match last year’s MacBook Pro 15-inch (Retina Display) on the Heaven 3D gaming test (42 fps vs 45 fps, medium quality), even though last year’s model has discrete Nvidia GeForce GT 650M graphics. This means that for light to moderate gaming, the Iris Pro 5200 is more than adequate. The new PCIe-based Flash storage was quick on booting up, installs, file operations, and launching apps.

The Apple MacBook Pro 15-inch (Newest Version) earns its title as one of the best high-end desktop replacement laptops you can buy. It has the power of a desktop Mac, and the battery life to carry you through a full workday and beyond. The screen resolution is higher than most all-in-one desktop PCs and desktop replacement laptops. The Razer Blade is more of a gaming system with a lower 1,600 by 900 resolution screen than the MacBook Pro.

Upcoming professional-grade Windows mobile workstations have the potential to challenge the MacBook Pro in thinness, screen resolution, and performance, but right now the 2021 MacBook Pro with M1 Pro chip is the one to beat. It’s a worthy successor to last year’s MacBook Pro 15-inch (Retina Display) and is our newest Editors’ Choice for high-end desktop replacement laptops. 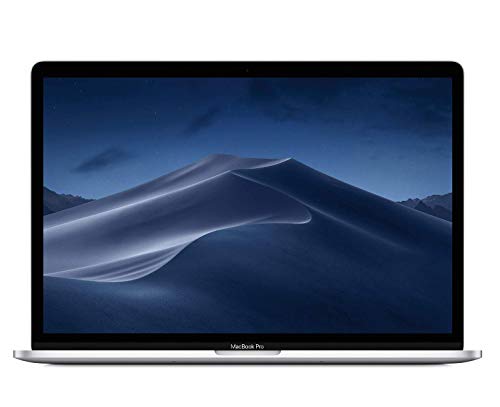