The ASUS C101PA-DB02 has everything going for it, including all features we love about the Chrome-OS family —inexpensive, Web-connected, extremely simple devices, Rockchip-powered— and adds all-day battery life.

At launch, Google had a premise of portable and very affordable Chrome OS-powered alternatives to mainstream notebooks. Over the years, the number of laptops under the Chrome umbrella has soared and manufacturers have sought new ways differentiate, some with super-slim designs, top-notch components, flex hinges and touch screens – prices have also gone up.

The ASUS C101PA-DB02 Chromebook Flip, on the other hand, boasts a gorgeous, lightweight multimode design, touchscreen, excellent performance and superb battery life for a pittance. It synthesizes the best innovations over its peers including an aluminum body, and it does so affordable, making it our Top Pick for the category.

The 360-degree hinge design is the origin of the name Chromebook Flip, as it lets you fold the display back and forth, giving you multimode usages, including Stand and Tablet modes. The Flip is quite different from most chromebook that use a dual-hinge design, like the Lenovo ThinkPad Yoga 11e, in that it has one long hinge that runs the length of the display and keyboard. That approach adds to versatility, making it one of only three chromebooks that claim tablet functionality alongside other modes.

An aluminum construction puts the Flip head and shoulders over its plastic competitor, and it feels like having a MacBook Air in a miniature. Beyond the aluminum build, the Flip is exceptionally slim, measuring 0.6 by 10.4 by 7.2 and weighing only 2 pounds, which is the same size and weight as its iteration from last year, the ASUS C100PA-DB02. It is slim and very light, you can easily fold it around into Tablet mode, and it will still be sleek and impressively easy to hold.

A 10.6-inch is what you have on Acer’s Chromebook Flip, but it’s a better version of what you’d find on most chrome OS systems, thanks to an In-Plane Switching (IPS) panel. It has a resolution of 1,280-by-800, quite low than most chromebooks provide, even the basic ones opt for a better 1,366-by-768 resolution. Still, for a 10-inch display, it doesn’t make much difference, this one makes up with fairly wide viewing angles and touch support – a rare offering, which we’ve only seen on the newest version of the Google Chromebook Pixel and Acer Chromebook C720P, but it remains a rarity in the price range. Speakers are audible enough, but volume is low, you’re safe with headphones.

Even with a compact size, the keyboard on the Flip is good, and doesn’t feel cramped as you’d expect of a 10-inch laptop. It has good key travel and travel, and keeps the usual Chrome layout, marked by a dedicated search key in place of Caps Lock, and Chrome functions instead of F1 to F12 keys. The touchpad is small, which I expected for the small size chassis, it is optimized for Chrome OS gestures, including two-finger tapping and other functions.

Port selection is excellent. Here you get two USB 3.1 (Type C) ports, one USB 2.0 port, a headphone jack and a micro SD reader. It isn’t always that you find two USB Type C ports on a system, even the latest high-end ultrabooks, a few them come with only one USB Type C port. These ports are on the right side, the left side holds buttons for Power and volume. Connectivity to the Internet comes via dual-band 802.11ac Wi-Fi and Bluetooth 4.0.

For storage, there’s only 16GB eMMC, typical for less-expensive Chromebooks. This isn’t a deal-breaker, going by the reliance of Google Drive and apps like apps like Google Docs, Sheets, and Slides. Plus, the Flip comes with 100GB offer of Google Drive storage, and the USB ports and microSD card slot you have plenty options for local storage as well.

The ASUS Chromebook Flip is equipped with a 2.0GHz Rockchip RK3399, a in-expensive quad core processor that has just hit the market alongside 4GB of RAM and Mali-T860MP4 graphics. We hope we’ll be seeing more of this processor as manufacturers brace themselves to release inexpensive systems and Chromebooks. However, in as much as affordability is a factor in using this processor, its performance is surprisingly impressive, especially when compared with the Intel Atom and Celeron processors we’ve always seen on many Chrome-based laptops.

That said, the compact Asus Flip offers a surprisingly smooth and robust user experience, with fast boot time –from a cold start till every window is fired up. While most Chromebooks will get sluggish as you start streaming media or open more than two or three tabs, I was able to stream YouTube videos whilst surfing through 9 other webpages. Apparently, it’s one of the best Chromebook experience I’ve had in this side of competition with superior features such as Intel Core i3 processor.

Battery life is good. On normal use, it lasted 8 hours 46 minutes, which is way better than most Chromebooks, for instance the HP Chromebook 11 (5:29), Lenovo ThinkPad Yoga 11e (6:17), the Acer C720P (7:20). However, it was unable to outlast the more expensive Google Chromebook Pixel’s 12 hours 9 minutes.  On a single charge, the 8-hour battery is more than enough to take you through not only a full day of college classes or work, but well into the evening. It suffices as a perfect system that you can stash in your bag for a weekend trip and not worry having forgotten your charger at home.

A Forward-Looking Chromebook to Have

The ASUS C101PA-DB02 has everything going for it, including all features we love about the Chrome-OS family —inexpensive, Web-connected, extremely simple devices, Rockchip-powered— and adds all-day battery life. To that, it adds great features like a 10.1-inch IPS touchscreen display, two USB type C ports and an aluminum body with a svelte, convertible form factor. For all this and impressive offerings for a price that’s hard to beat, it easily replaces the HP Chromebook 11 as our Top Pick for Chrome-based laptops. 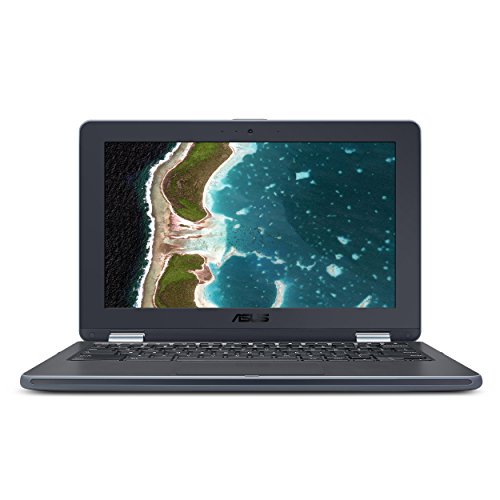