The Asus Chromebook C523NA-DH02 proves that it’s possible to make a quality 15-inch laptop with a luxury feel for a reasonable amount of money. The swift Chrome OS helps, in that a relatively low-end CPU manages to provide outstanding performance.

Back in May 2016, Google first announced that it would update its Chrome OS to allow Android apps on Chromebooks. While the roll out of support for Android apps has been slow, there are now a healthy number of first- and third-party Chromebooks that can run the hundreds of millions of apps available directly from the Google Play Store.

As the number of supported devices gains traction, one this is for sure – very soon, Chromebooks are going to compete with the number of Windows and MacOS laptops in the market. And, with enhanced access to the Google Play Store will significantly improve what users can do with Google’s chrome OS.

With over 50 devices now supported in the Android apps platform, manufacturers are releasing finely-tuned portables to cater for the new market, especially the 2-in-1 niche. Asus has released a new Chromebook, the C523NA-DH02 that makes a solid entry into the budget space.

It’s solidly built with a nice screen and decent components, including an Intel Dual-Core Celeron N3350 Processor, 4GB of RAM, and 32GB of eMMC storage.

Is it the budget 15-inch Chromebook we’ve all been waiting for?

The Asus Chromebook C523NA-DH02 has an all-aluminum build that exudes quality, something we’ve never seen at a price point this low. With a low-power processor and a fanless design, this Chromebook is solid, without the usual vents that break up the clean look. It’s a 180-degree ultraportable, meaning it can lie flat on a presentation table for easy collaboration, when not being used in the usual laptop mode.

The two hinges do a good job of keeping the screen in position, without wobbling like most budget notebooks. And although the Asus Chromebook is light enough at 3.1 pounds that it’s comfortable to carry and use, and won’t make you feel like you need to coddle it.

From a distance, it looks like a value replacement for the expensive ultrabooks in the market, only that it uses Chrome OS instead of the mainstream Windows 10 operating system. 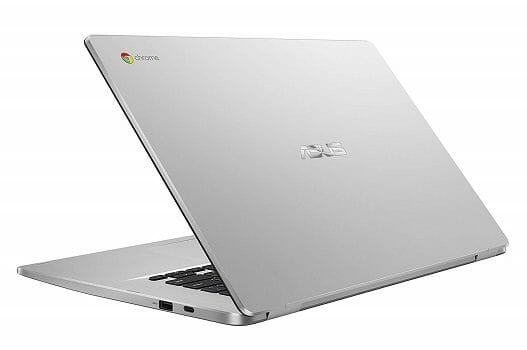 As is the trend lately, the system comes optimized with both USB 3.1 Type A (Gen 1) and USB 3.1 Type C (Gen 1) ports, with support for display/power delivery. On each side of the Asus Chromebook C523NA-DH02, there is a USB 3.1 Type-A and USB Type-C port for charging and plugging peripherals, like a mouse and keyboard.

Also, you’ll find a microSD slot and a headphone/mic jack on the left side. Wireless connectivity comes via 802.11ac Wi-Fi and Bluetooth 4.0. You can connect to your router, or pair your Bluetooth headphones and stream music without issues and maintain good quality.

The 15.6-inch display has a maximum resolution of 1366×768, which works out fine, but 1080p would be better. After all, that’s not bad, considering this is an inexpensive system. Chromebooks have proven resilient in bringing full HD to low price points, its surprising that the Asus Chromebook C523NA-DH02 is not part of that movement.

Nonetheless, the display is perfectly pleasant for day-to-day usage. You can test its accuracy with some of the default wallpapers that come with Chrome OS, the colors of landscapes are vivid, and the stars are definitely easy to make out. Text is also crisp, only that its relatively harder to make out details in darker scenes, but the bigger display is better than the normal for Chromebooks and budget laptops, in general.

The Asus Chromebook C523NA-DH02 uses a full-size keyboard, something you don’t find on the diminutive 11-inch Chromebooks. The keys are comfortable to use with good spacing, and still use the typical Chromebook layout – including having a search key where you’d expect to have a Caps Lock key.

At 1.44mm, this level of key travel is rather shallow, and a little spongier than is optimal for a touch enthusiast. Still, the overall feel is acceptable. The keyboard is non-backlit, which isn’t surprising at all. The touchpad is standard size, that’s to be expected given the Chromebook’s big size. It’s sweetly responsive, however, with multitouch gestures supporting the usual pinch-to-zoom and scrolling functions.

At the heart of the Asus Chromebook is an Intel Dual-Core Celeron N3350 CPU clocked at 2.4GHz. That is paired with 4GB of RAM and 32GB eMMC flash storage, all of which add up to decent performance for a budget Chromebook. This unit swiftly opens 12 Chrome tabs and you can stream a number of YouTube videos, without slowing the machine. It suffices as a good choice for college use and basic productivity tasks at home.

With an integrated HD Graphics 505 GPU, the Asus Chromebook C523NA-DH02 is only cut for basic games, and nothing beyond what you can download in the Play Games store. For all less-demanding games, the C523 will do just fine. If you need to tinker with modern games, you’ll have to look higher in the hierarchy, of course, anything with a discrete graphics card is more ideal.

Chromebooks often last an entire school day on a single charge, and the C523 keeps up with the tradition. The laptop powers down after 9 hours 20 minutes, when used for surfing continuously over Wi-Fi at 150 nits. That’s acceptable considering that most of its rivals like the Acer Chromebook 15 and Dell Chromebook 5190 average 9 hours 30 minutes.

The Asus Chromebook C523NA proves that it’s possible to make a quality 15-inch laptop with a luxury feel for a reasonable amount of money. The swift Chrome OS helps, in that a relatively low-end CPU manages to provide outstanding performance for most daily productivity tasks, and Chromebooks are gaining a real boost in value with the continuing addition of millions of Android apps. For its price, the Asus C523NA-DH02 offers a great experience for anyone who can live within the general constraints of Chrome OS.

There are quite a few options at the Chromebook C524’s 15-inch display size and price point. If you’re willing to step down in size, then you can opt for a 14-incher with the Lenovo Chromebook S330. You’ll get roughly identical performance except for multitasking thanks to the MediaTek MTK8173C Processor, 4GB of RAM and 64GB eMMC storage in the smaller laptop.

If you’re willing to spend a little more and the flexibility of a 2-in-1 appeals to you, then you could consider the Asus Chromebook Flip C434TA-DSM4T. That’s our Editors’ Choice device, offering a 360-degrees format, a touchscreen, all-day battery life and a premium design.

Yes. For the money and given its excellent build quality and good battery life, the Asus Chromebook C523NA-DH02 is a safe choice that’s unlikely to disappoint. 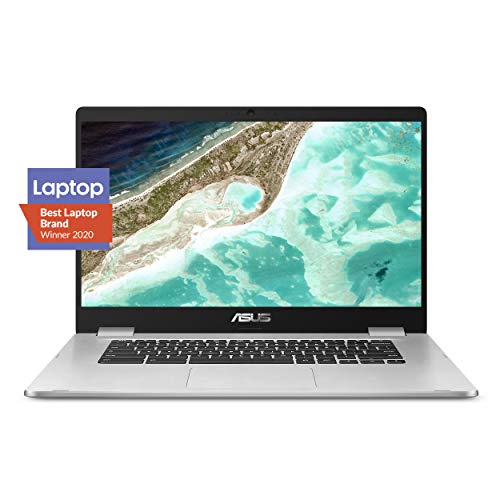