The Asus ExpertBook B9450 (B9450CEA-XH75) is one of the slimmest and lightest business laptops in the world, with the longest battery life of all laptops we’ve reviewed. Its featherweight chassis makes it a great alternative to the Lenovo ThinkPad X1 Carbon.

For the business traveler, portability reigns supreme. Enter the Asus ExpertBook B9450 (B9450CEA-XH75), a super-portable business laptop that weighs only 2.23 pounds and is just 0.6-inch thick – lighter than our favorite Lenovo ThinkPad X1 Carbon (3 pounds, 1-inch). This featherweight laptop is certainly the lightest commercial notebook in the world, something that will appeal to business executives who need something powerful and portable for cross-country flights.

Well, in addition to the portable profile, the Asus ExpertBook B9 leads the pack, yet again, with an astounding battery life, which averages 17-hours on video-playback tests, a new record in the business category. In addition to these twin charms, it packs a whopping 1TB of SSD storage, a luxe angled keyboard, and more ports than you’ve ever seen in an ultraportable laptop.

As always with enterprise laptops, the ExpertBook B9450 comes with lots of integrated security features, including a fingerprint sensor and IR camera. Other standout additions in the B9450CEA-XH75 model we’re reviewing include an illuminated number pad integrated into the touchpad – we’ve seen the same feature on the Asus ZenBook 13, and a light bar on the laptop’s front edge.

Though the ExpertBook B9 sets two records and could be the ultimate business laptop if not for middling display technology and quirks with the keyboard and touchpad. Regardless, the B9450CEA-XH75 is the best Asus laptop released in recent months and a great alternative to the Lenovo ThinkPad X1 Carbon and HP Elite Dragonfly.

As mentioned, the ExpertBook B9450’s feather-weight is paired with a body that’s measures 12.6 x 8 x 0.6 inches, making it one of the most compact devices on the market. With such a svelte body, there’s always a concern about build quality, and sure, there’s a certain amount of give in the B9450 – the screen flexes than most, and there’s noticeable movement in the metal surrounding the keyboard, touchpad, and base.

All that is on the design though. When we get to the core, the Asus uses multiple layers of magnesium-lithium alloy instead of a single metal block. The body material used here has undergone MIL-STD-810G testing to ensure it can withstand pressure, shocks, drops, vibrations, and extreme temperatures. The laptop’s hinge, ports, and keyboard have equally undergone similar military-grade tests.

So, while the body has some flex, it’s designed to withstand bumps and still keep working, so you don’t have to worry about tossing this ultraportable in a bag.

With this design approach, Asus manages to separate itself from its biggest rivals. The Dell XPS 13 and Apple MacBook Air don’t have the same MIL-STD-810G certification, instead, they are made from single metal blocks and so feel sturdier. However, these machines must have undergone similar testing, but we’re confident that the Asus B9 is robust enough to survive daily commute.

Once again, the Asus ExpertBook B9 undercuts its rivals on portability: The Dell weighs 2.8 pounds and is 0.58in thick, while the latest MacBook Air is a 2.8-pound notebook with a 0.63in body.

Asus did an admirable job of cramming robust features into such a tiny machine. On the right edge, it’s got a full-size USB 3.2 Gen 2 port, a headphone jack, and a Kensington lock slot. On the left, it’s got two Thunderbolt 4 ports with DisplayPort and power delivery support, alongside an HDMI output.

Asus also includes micro-HDMI, which works fine with an included adapter to deliver Gigabit Ethernet, without sacrificing one of the USB sockets. The only notable omission is a card reader, which will not settle well with photographers looking to quickly transfer files between the B9450CEA-XH75 and their camera.

Right above the display, there’s a webcam with a privacy shutter and Windows Hello, and just below the keyboard, you’ll find a fingerprint reader. Wireless connectivity comes via dual-band Wi-Fi 6 and Bluetooth 5.1 and a TPM 2.0 chip for security.

Neither of the two direct competitors can compete here. The Dell XPS 13 has the same internal connectivity, has two Thunderbolt 4 ports and a MicroSD slot, but it has a horrible webcam, lacks a full-size USB connection, and has no HDMI. As for the MacBook Air, it has Thunderbolt 4 ports, and nothing else.

A spill-resistant design for the B9’s keyboard is a boon for business users. The keyboard itself has satisfactory performance – the buttons are fast and consistent, they have reasonable travel, but they are a little too springy for my liking. I still prefer typing on the ThinkPad X1, and both Dell and Apple machines have keyboards that are crisper and quicker.

Nonetheless, the ExpertBook B9450 will handle hours of typing, but the XPS 13 and Air feel luxurious and satisfying to type on. However, the ErgoLift hinge is a mixed bag, some people love it, but I find it inconveniencing as it digs into your thighs if you sit down, and the inclusion of the power button on the keyboard isn’t appealing at all.

As for the trackpad, it’s huge and responsive, with nothing to complain about. It has an extra feature, though, it comes with a NumberPad overlay, which is helpful to people who deal with numbers or spend lots of time in Excel. Still, the touchpad itself tracks smoothly, though it has some little flex on and around when you click.

As for the screen surrounded by thin bezels, it looks great and is pretty straightforward. It’s an IPS panel with a Full HD (1,920 by 1, -080, or 1080p) resolution with an anti-glare coating to reduce deflections. It feels nice and roomy with the thin bezels, especially when it is compared to the laptop’s total footprint – it boasts a 94 percent screen-to-body ratio, giving users more display real estate on the table.

It is a sharp-looking screen, with good colors, though the brightness isn’t the best around, even at the maximum brightness setting.

Used for everyday work, photo-editing, and media, the Asus B9’s screen is superb. Dell and Apple offer better screens, though: Apple’s Retina display is brighter, sharper, and adheres to the DCI-P3 gamut. On the other hand, the XPS 13’s default screen is a 16:10 model with a higher resolution and is available with 4K and touch options.

Elsewhere, the Asus ExpertBook B9450 has mediocre speakers: tinny and lack bass, and without mid-range audio clarity. They’re the only idea for casual media consumption.

The Asus ExpertBook B9 uses a familiar Intel Core i7-1165G7 processor. It’s one of Intel’s most reliable laptop chips offerings, with four cores and a boost speed of 4.7GHz. It’s twinned with 16GB of memory and a 1TB SSD.

Compared: in single-and multi-core Geekbench tests the Asus scored 1506 and 4981. Those scores aren’t bad, but the new M1 chip inside the MacBook Air maxes out with 1736 and 7309 in the same tests. The XPS 14 uses the same CPU as the B9 but scored 5689 in the multi-core benchmark. If you’re willing to look beyond ultra-portables, AMD’s laptop chips are faster in multi-core performance.

During use, the Asus makes a little high-pitched fan noise, especially on strenuous work tasks. Still, the fans are quiet and won’t ruin your workflow, but this Asus ExpertBook B9 is not silent, but the MacBook Air is.

In PCMark test that simulates a typical office workload at half display brightness, the Asus lasts 16 hours 8 minutes, and with the screen at peak brightness, it drops to 14 hours 9 minutes. In a video playback simulation, the Asus B9 lasts 17 hours 16 minutes.

Those are excellent results – you’ll certainly manage a full day of work, and it’ll handle some time on the sofa late into the evening. These results compare well to rivals: the MacBook Air offers similarly broad longevity, and the Dell XPS 13 isn’t much far behind in its 1080p configuration.

For this year, with the ExpertBook B9450, Asus is very close to making that dream business laptop, but a few quirks keep it from being that device.

On one part, it does most things right: the Asus ExpertBook B9450 has an attractive chassis that’s both featherlight and military grade-durable. The 1080p screen is bright and vivid, and the anti-glare makes it great for outdoor use. But the ridiculously long battery life is the clear highlight of the ExpertBook B9450 – lasting over 16 hours. Well, it’s worth affirming that’s longer than any other laptop.

Elsewhere, small quirks like a finicky touchpad and a frustrating keyboard layout prevent the Asus B9450CEA-XH75 from being the swiss-knife of business laptops. Again, the performance of the B9450’s Core i7 CPU falls short on certain tasks, especially when compared to the MacBook Air’s M1 Chip.

That said, the Asus ExpertBook B9450 isn’t our unequivocal business laptop recommendation – that remains to be the Lenovo ThinkPad X1 Carbon Gen 9 among clamshells, or if you want a convertible, the HP Elite Dragonfly, but it fills its role well. And if battery life is a sign of great things to come out of project Athena laptops, we can’t be happier. 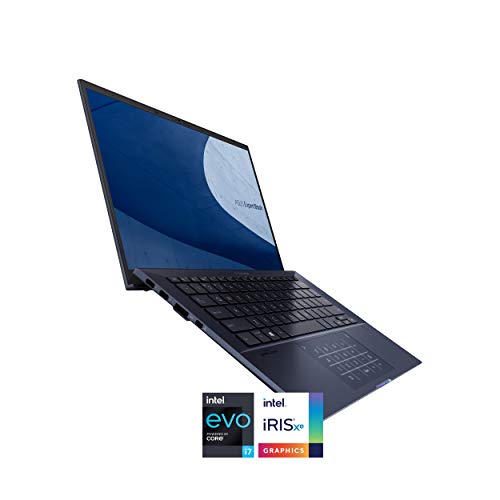