The Asus G11CD-DB52 is an entry-level gaming desktop designed for gamers on a budget but fancy a smart-looking case, superb productivity and ability to play modern titles without spending much. If you’re a budget hunter looking for unbeatable value, it is worth a long look.

Everything you can see and touch on the Asus G11CD-DB52 is satisfying enough, and proof that you don’t require an exorbitant budget to play. This desktop gets a Sci-Fi-inspired design, and packs a punch on the inside for safe gaming and reliable productivity. With a sixth-generation Intel Core i5 processor, 8GB memory and a GeForce GTX 950 graphics card, the system can handle modern games without breaking a sweat.

If you need one with the latest components, the CYBERPOWERPC Gamer GXIVR8060A4  is a VR Ready alternative, that features a seventh-generation Core i5 processor, Nvidia GeForce 1060 graphics card and 120GB SSD+1TB storage. But if all you need is a system with a flexible design and an optical drive is a must-have, the DB52 is a shoo-in.

In designing the Asus G11CD-DB52, Asus focused on raw power, but carried forward the same motif from the Asus G11CD-WB51. You don’t get much in terms of aesthetics, just a plain charcoal gray profile, clad with customizable chassis lighting with 8-million color LED light effects on the front top and bottom, as well as on the sides.

Measuring 16.6 by 6.9 by 17.3 (HWD) and weighing 21.6 pounds, this PC is just the right size for standard worktop surface, but it doesn’t beat the Alienware X51 AX51R3-1510BLK, designed to fit in the most constrained of working spaces where space saving is a matter of priority. The midsize tower is a nice change from most gaming desktops we’ve seen in this category. Bundled into the package is a chicklet keyboard and USB mouse; monitor is bought separately. If you care more about frame rates, the ASUS ROG SWIFT PG248Q will be the a good choice.

Port selection is excellent. It gets 10 USB 10 ports: four USB 2.0, four USB 3.0 and two USB 3.1. For video outputs, you have an HDMI-out and VGA via the mainboard’s chipset and an additional HDMI-out, DVI and 3 DisplayPorts in the graphics card that support Ultra HD-4K video output. This means that you can hook up to four displays in panorama mode to a single CPU, especially when running different projects at the same time.

A Gigabit RJ-45 port and 802.11ac Wi-Fi + Bluetooth adapter provides a gateway to the Internet and other networked systems, while a DVD burner and a 16-in-1 card reader allows you access to most media files.

For storage, the included 1TB (7200rpm) hard drive is enough for storing games and other downloads. The system doesn’t get a solid-state-drive that is becoming standard even in the entry level category. That said, the CYBERPOWERPC Gamer GXiVR8040A3 fuses a 120GB SSD and a 2TB HDD for storage. With such a configuration, the SSD assures of fast booting, while the HDD suffices for storing your files and other documents.

A sixth-generation 2.7GHz Intel i5-6400 processor paired with Nvidia’s GeForce GTX 950 (2GB) and 8GB RAM are satisfying for a day of gaming and media creation. This configuration is mainly aimed at gamers on a budget who still fancy a machine capable of playing the latest AAA titles, so I can only pit it against three of its closest competitors the: Acer Aspire GX-281-UR11, Dell i5675-A933BLU-PUS and CYBERPOWERPC Gamer GXIVR8060A4, all with the latest components. Still, it holds its own even though it uses chips from the previous generation, meaning it can still play smoothly just like its competitors released this year.

There are lots of ways to measure a system’s performance, but for a gaming PC, gaming tests are the ideal metrics. The Asus G11CD-DB52 managed a respectable 5652 points on the 3D Mark Fire Strike tests, while the Asus G11CD-DS71 and Acer Aspire GX-281-UR11 –both equipped with GTX 1050 graphics cards, scored 5729 points on the same test. With this card, you’ll get smooth play on modern titles provided you don’t push the settings too high. Played 1080p (1920-by-1080) resolution, it delivers 95.8 fps on Overwatch, 29.3 fps on Hitman and 46.9 fps on Fallout 4, which is a good showing for a budget system. 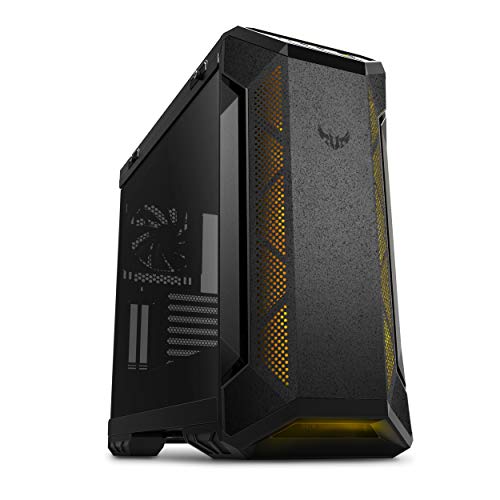 A Clear Contender in Desktop Gaming

Although pitched as a gaming PC, the Asus G11CD-DB52 excels well in other tasks including media creation, Photoshop, video editing etc. Besides games, its application benchmark scores are nothing less of impressive, putting it in the same ballpark as desktops that cost almost double. Looking at it, I see a system that challenges the conventional cliché of where the intersection of performance and budget should lie.

For much less than you’d pay for most high-end gaming machines, you’re getting a system that is adept to handling heavy workloads. That said, the CYBERPOWERPC Gamer GXIVR8060A4 strikes a good balance on performance and pricing, with the latest components for much less. It remains our Editors’ Choice for entry-level gaming desktops.