The ASUS G11CD-DB72 is among the first gaming desktop PCs with Nvidia’s Pascal graphics (GeForce 1080) technology, alongside Intel’s sixth-generation Core i7 processor, 16GB RAM and a snappy 512GB SSD.

The last time we did look at the Asus Gaming Desktops line was a couple of months ago, just when the idea of the NVIDIA GeForce GTX960 graphics card was starting to take hold, with the release of the ASUS G11CD-US008T Gaming Desktop. At that time, the then-new GeForce GTX 960 was a much better way to play high-end PC games at high resolutions, and many loved it to a fairly wide margin.

Since then, PC gaming has closed the gap considerably, with potent GPUs playing games easily in full HD and some pushing it to higher resolutions like 4K. Then came along virtual reality (VR) which made traditional gaming look like an anachronism, and it dropped a shocking high-end list of required specs (for both laptops and desktops).

Then, along comes the  ASUS G11CD-DB72, a VR-ready, high-end gaming PC which is among the most flexible, most powerful (in terms of GPU and CPU) desktops we’ve seen lately in this category. It boasts the latest NVIDIA GeForce GTX1080 graphics card, a sixth-generation Intel Core-i7 quad-core processor, and 16GB DDR4 system memory alongside a fast 512SSD.

The custom desktop case hasn’t changed much since we tested the ASUS G11CDG11CD-WB51, perhaps, because it was a rare beast, to begin with, immense gaming power and a design to match. The ASUS G11CD-DB72, rather refreshingly, opts for a laid-back and bald design while focusing on the real functional and powerful hardware performance. It sports a middling charcoal gray profile, clad with customizable chassis lighting with 8-million color LED light effects on the front top and bottom, as well as on the sides.

It measures 17.3 by 6.9 by 16.6 inches and weighs 9.8 pounds, making it ideal for the most common desktop surfaces, but is not as small as the Alienware X51 AX51R3-1510BLK, designed to fit in the most constrained of working spaces where space saving is a matter of priority. The midsize tower is a nice change from most gaming desktops we’ve seen in this category with excellent connectivity options.

The system supports up to three HD displays in panorama view and a fourth display through HDMI, movies and other projects will be rendered seamlessly. Bundled into the package are a chicklet keyboard and USB mouse; the monitor is bought separately.

Connectivity is excellent. The ASUS DB72 features a total of 10 USB 10 ports: four USB 2.0, four USB 3.0, and two USB 3.1. For video outputs, you have an HDMI-out and VGA via the mainboard’s chipset and an additional HDMI-out, DVI, and 3 DisplayPorts in the graphics card that support Ultra HD-4K video output.

This means that you can hook up to four displays in panorama mode to a single CPU, especially when running different projects at the same time. A Gigabit RJ-45 port and 802.11ac Wi-Fi + Bluetooth adapter provides a gateway to the Internet and other networked systems, while a DVD burner and a 16-in-1 card reader allow you access to most media files.

As mentioned earlier, the ASUS G11CD-DB72 is equipped with a sixth-generation 3.4GHz Intel Core i7-6700 processor, with the quad-core supporting up to 4.0GHz clock speed in turbo mode. Combined with 16GB of DDR4 system memory (upgradable to 32GB since the system has 2 slots that can support 16GB each), the ASUS US008T stands out as one of the potent gaming desktops in the midrange category.

Tested in standard mode, without overclocking engaged — considering that most gaming rigs opt for the perks of high-performing Core i7 processors, it held its own as a surprisingly potent performer. Perhaps this affirms the impressive 9962 CPU Passmark Score, which is a rarity in most desktop PCs of its ilk.

In this review, we’re primarily interested in the impact of the newest cutting-edge components from Intel and Nvidia. In fact, we wanted to see how well the system plays with our latest power-hungry obsession, the virtual reality world. For a couple of weeks, I primarily used it as my main HTC Vive test machine, and it gave me a nice entry into NVidia’s latest GeForce 1070 graphics card.

Particularly, I used it with the new Everest VR app designed for the HTC Vive alongside Nvidia’s VR Funhouse app–both of these are intended to sip some extra graphics and physical processing power built into the new Nvidia GPUs.

The Asus DB72 handled both smoothly, at the highest possible details settings without struggling. It also delivered amazing scores in other challenging VR apps, which is quite impressive for a gaming PC of its ilk. Compared with VR, which requires that you have two separate screens in order to run a game at 90 frames per second (FPS) each, this rig pushed gaming to a new frontier, and 2D games like No Man’s Sky are just a breeze.

Although pitched as a gaming PC, the ASUS G11CD-DB72 excels well in other tasks including media creation, Photoshop, video editing, etc. Besides games, its application benchmark scores are nothing less impressive, putting it at the top of our collection of high-end VR-ready PCs.

That said, ASUS G11CD-DB72 combines powerful gaming performance, ample real estate to grow, and brings to the competition some forward-looking technologies that will remain relevant for the next 3-5 years. For that, the ASUS G11CD-DB72 is our newest Editors Top Pick for the midrange gaming category.

If you’re in the market for a potent gaming PC, it deserves to be on our best gaming PCs list; and for multimedia evangelists and gamers, it is something we can call ‘a step in the right direction. 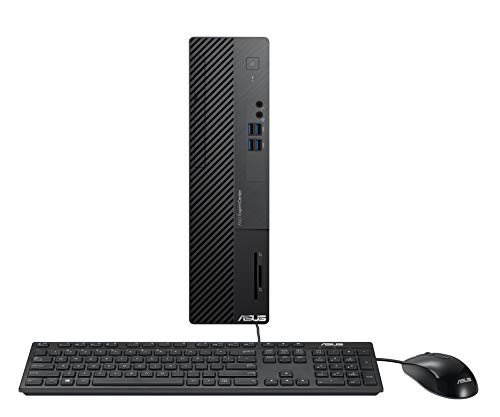