The Asus M11BB-B10 Essentio is a good choice for an entry-level desktop PC or the home/office that will deliver on day-to-day productivity, although it may be slower than competition.

The Asus M11BB-B10 Essentio is one of those desktops that works very well now, and have potential to grow through upgrades into a great system later. It already comes with a AMD A8-5500 CPU, and AMD Radeon HD 7560D graphics cards, and is otherwise fully loaded. It’s not a stellar performer in your demanding day-to-day tasks, especially, when compared with Intel’s competing i-series of CPUs like the Dell XPS x8900-631BLK.

However, stacked against gaming- and graphics-intensive applications, the AMD Radeon HD 7560D bests Intel’s integrated graphics by a significant margin. If you want a system that can grow with you, and if you’re the type who likes to tinker, the M11BB-B10 is an upgradable desktop with the potential to grow into something great.

The Asus M11BB-B10 is built into a fairly good-looking glossy tower chassis. Its rectangular panel and boxed accents may help it stand out on the store shelf, but not so much as it would look out of place in your home. Conveniently placed on the front-upper panel are a few easy-access ports: a media card reader, audio ports, and two USB 2.0 ports. I wish Asus would have placed two more USB 3.0 ports on the front panel so that you’d be motivated to use the faster interface.

Directly underneath is a tray-loading DVD+-RW drive. The back of the unit features even more connectivity options, including a DVI-D, VGA, and HDMI video outputs, four USB 2.0 ports (two of which can be occupied to connect a wired keyboard and mouse), and two USB 3.0 ports.

The motherboard is equipped with an RJ-45 port in the back, although a Wi-Fi card is missing, which you can be install to an available PCI-e x1 slot inside or plug adapter to the USB port. It also comes with Bluetooth 4.0 that can conveniently help you connect to Bluetooth enabled devices like mobile phone, printer or speakers wirelessly.

Under the hood is 8GB of system memory; enough for most users. Should you need more, you have the option of expanding it to 32GB since the mainboard has four slots. For storage, you have a 1TB hard drive at 7200 rpm (rotations per minute), which is better than 5400rpm, but slower than the new crop of solid-state-drives (SSDs).

If possible, you can pair up an SSD as they have significantly come down in prices, and the ultimate benefit will be definitely faster boot times and a general boost on performance. It comes with Windows 8.1, but you can always upgrade it to Windows 10 might you find it necessary.

The Asus M11BB-B10 has a strong heart for most day-to-day activities with its AMD A8-5500 processor. It is not the fastest computer you can get in the market, but at 3.2GHz base speeds and up to 3.7GHzturbo speed, you won’t have to wait too long for things to get done. However, speedy performance here depends on what programs you’re going to throw its way. However, the fact that the processor here falls in the 2012 class of quad-core processors (with ~4000 points in CPU Mark) doesn’t make it any better.

In fact, it is way slower than most desktop intel Core i3s and i5s, meaning that it suffices well for usual stuff like web surfing, and Microsoft Office tasks among other basic projects. If you are a power user and on a budget, you might have to at the ASUS M32CD or the ASUS Desktop S300 desktops, both armed with Intel’s Core i3 and Core i5 processors respectively.

The AMD Radeon 7560D graphics card with shared video memory has a benchmark score of 666, and its performance is better than Intel HD 4000 and even Radeon HD 7660G. This means that you can play some recent titles and experience good quality images, translating to acceptable multimedia performance. If we get nitty, famous games like GTA 5 would get ~25 frames per second on normal settings and 720p resolution.

Although you’ll experience some slight choppiness, the games will still be playable. As mentioned earlier, the system has potential to grow into something better, meaning that you have the option of installing a dedicated graphics card on one of the PCI-e x16 slots on the mainboard. The 300 (350W peak) power supply can support another graphics card, but you might need to upgrade it if you will be installing a beefy card in the system.

The Asus M11BB-B10 Essentio is a good basis for a home/office desktop PC. It has the chops to perform medium productivity tasks such as web browsing, Microsoft Word processing and a bunch of multimedia tasks quickly. The system is a good choice model for the person who is looking at future upgrades, including gutting the system’s graphics and power supply. Furthermore, it’s a great entry-level unit that has room for future growth—but you may have to swap out the power supply.

It also doesn’t come with Wi-Fi—a huge exclusion for a household desktop PC, as most families may not keep their router and PC in the same room. But if your needs go beyond Web browsing and office tasks, the Editors’ Choice HP Pavilion TG01-1022 should be more your speed and worth a long look as you shop for a budget desktop PC. 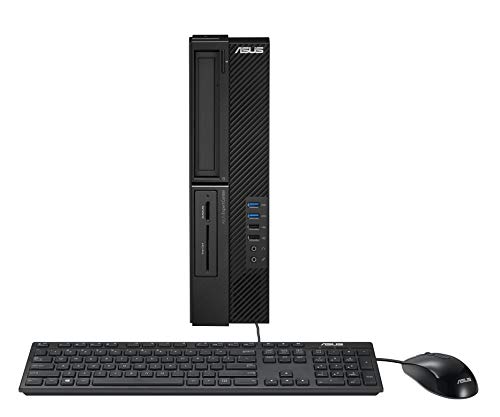