The Asus ROG Strix G10 (G10CE-AH766) is a gaming PC that offers incredible value for money, thanks to a strong Intel Core i7 processor, RTX 3060 graphics card, lots of memory, and tons of SSD storage.

The Asus ROG Strix G10 (G10CE-AH766) is a mid-sized desktop PC that presents enthusiast players with one of the best and most affordable opportunities to tighten their grip on the PC gaming scene. After all, there’s a reason why it sits comfortably almost at the top of Asus’ list of best entry-level gaming PCs.

Asus’s latest ROG Strix line-up offers gamers the ability to choose from mid-tier configurations that now include 11th Gen Intel processor, an Nvidia RTX 30-series graphics card, and up to 64GB of DDR4 RAM, all packed into a compact, stylish case.

Our review unit, the G10CE-AH766 packs a solid feature set for gamers who’re more interested in playing games at 1080p and occasionally at 1440p. All that is thanks to an 11th-generation Intel Core i7-11700 CPU, Nvidia GeForce RTX 3060 GPU, 16GB RAM, and 1TB SSD storage. It’s not a great choice if you’re looking to play games at 4K, and the lack of at least a USB-C port leaves much to be desired.

Most competitors in the sub-$1,500 price range mostly offer AMD Ryzen 5 processors and pair them with RTX 3060 GPUs, making the ROG Strix G10 a better gaming rig than most. If you have a little more extra cash at hand, you can bump to a 12th Gen processor and maybe an RTX 3070 Ti or even AMD Radeon RX 6800 XT in machines like the MSI Aegis RS or the Alienware Aurora R10. Otherwise, the ROG Strix G10 remains a solid choice for enthusiast gamers looking to take PC gaming seriously.

The ROG Strix G10CE comes in a compact metal build which has a very premium look on the outside with an LED streak that dominates the front panel. A bunch of sharp strikes with fading intricate folds also run along the front of the chassis, flush with a prominent Republic of Gamer logo.

The full tower CPU sports an iron-gray finish weighs around 24.6 pounds and has a capacity of 27 liters. Measuring ‎7.1 x 16.9 x 16.9 inches, the G10CE-AH766 will easily fit over or under a desk hassle-free. There’s an embossed Asus logo on the right panel of the CPU while the left side panel has ventilation for heat dissipation. Asus offers an optional transparent side panel that you can replace with the ventilated shaft. This gives you a view of the hardware inside with the help of the intricate RGB lighting system.

On the top are easy access ports – two USB 3.1 along with a microphone in/headphone-out jack. The power button is cleverly placed on the top right corner of the desktop. The top side is tapered slightly along the edges, which complements the overall design.

Around the back are multiple I/O ports with cutouts for ventilation and a power supply unit. These ports include – two USB 3.1 Gen 1 Type-A, two USB 2.0 Type-A, a single HDMI, 3-in-1 Audio jacks, and an RJ45 Ethernet port.

The RGB lighting system across the desktop can be controlled via the Asus Aura Sync utility in the pre-loaded Armoury Crate app.

Overall, the Asus ROG Strix G10 has a gorgeous design, is robust, and is less nerdy as compared to most gaming desktops in the market.

The Asus ROG Strix G10CE delivers the best of both worlds. With an 11th Gen Intel Core i7-11700 processor and 12GB Nvidia GeForce RTX 3060 graphics, this desktop is perfect for more than just running PC games. The G10 G10CE packs a powerful chipset and a capable graphics card that delivers the kind of power required to perform heavy multi-tasking like video rendering and content creation while hiding its impressive gaming DNA.

The motherboard here is Intel’s B560 which doesn’t support overclocking or RAID configurations. Even without overclocking, the RTX 3060 graphics card used here is capable enough to handle most modern titles without breaking a sweat.

Our review unit, the G10CE-AH766 packs 16GB DDR4 RAM in two DIMM slots and has two more slots for memory expansion up to 64GB. The desktop also comes fitted with an M.2 PCIe 1TB SSD which suffices for super-fast boot time and even the games load pretty fast.

The GeForce RTX 3060 graphics card performs well for gaming, delivering over 60 fps on most AAA titles played at 1080p resolution and high settings. The RTX 3060 is incrementally faster than its mobile version and is based on the GA106 Ampere chips and is paired with 12GB DDR6 graphics memory with a 192Bit memory bus.

This graphics card supports PCI 4.0 and offers 3,584 cores, making it a better performer than the older Nvidia GeForce RTX 2070 and therefore a great candidate for 1080p gaming at high settings.

For an enhanced audio experience, the Asus ROG Strix G10 supports DTS Headphones: X with 7.1-channel surround sound. Asus offers further control and optimizations of the audio via the DTS Audio app which allows users to adjust the sound output based on the kind of content being played. So, there are presets for Entertainment, Games, and Sports which can be tweaked based on the kind of listening source.

Should you buy the Asus ROG Strix G10CE?

For its asking price and feature set, the Asus ROG Strix G10CE is a gaming PC worth its salt. The desktop offers a subtle balance between work, entertainment, and entry-level gaming. Though you’ll be hard-pressed to play 4K games on this machine, it packs just enough power for 1080p gaming and 1440p at the very top, and it can run some intensive software as well.

However, if you’re a power user looking to overclock the CPU, you’ll have to look elsewhere. This is a gaming machine created strictly for the entry-level gaming PC market.

With the ROG Strix G10, Asus finally delivers an elegantly designed desktop that doubles up as your entertainment hub if you pair it to a 4K monitor like the Asus ROG Strix (XG43UQ). And its upgradability capabilities ensure that you can overhaul the internals to the latest hardware for better performance.

If you’re looking for an entry-level gaming PC and are not willing to go the DIY way, the Asus ROG Strix G10 (G10CE-AH766) is one of the best gaming desktops you can get for your money. 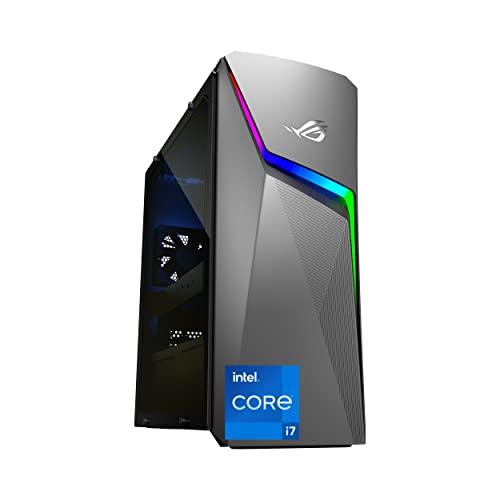