The Asus ROG Strix GA35 (GA35DX-XH999) is an incredibly powerful gaming PC with some of the very best components money can buy. It is also incredibly expensive, and some of the specs are simply overkill for most gamers.

The Asus ROG Strix GA35 is one of the most eye-catching launches in 2022. We’ve loved Asus ROG PCs in the past, with the company cramming in some of the best tech around into its seriously stylish and powerful gaming laptops and desktop PCs, and the GA35DX-XH999 promises to be its best gaming PC yet, with some truly top-tier components.

We’re talking about high-end components like the AMD Ryzen 9 5900X and Nvidia GeForce RTX 3090 plus a whopping 32GB of RAM and tons of storage. It’s by far one of the most expensive ROG Strix around, but even the Asus ROG Strix GA35 (GA35DX-XB999) we reviewed earlier wasn’t affordable either.

This is going to put it out of reach for many people. It’s a hefty asking price, and there are commonly more affordable ways of getting a gaming PC, and you can even go DIY. However, these are not normal times, and these days it’s still very hard to get an RTX 3090 in stock, let alone at a reasonable price. If you’re dying to get an RTX 3090, your options are quite thin, then, and the price of the Asus GA35DX-XH999 may be more than justified.

Further justifying the high price is the fact that the previous ROG Strix GA35 was impressively powerful – scoring well even on 4K resolution and high settings. Offering this kind of power in such a stylish chassis is incredible, and means this is a great TV to drive your gaming and productivity tasks. Whichever way you view it, this is a beast and will handle the modern game at 4K with relative ease.

If you’re looking for a superbly powerful and well-built gaming PC, you’re not going to get better than this. However, there’s no getting away from the fact that this is extremely expensive, and you’re paying a premium for the design, as well as some specs that arguably you might not need. For the more-budget conscious gamers, there are much more affordable alternatives out there, even with the biting global chip shortage.

For its previous G-series desktops, Asus used a taller, more traditional mid-tower case design, but the GA35 looks different. It arrives in a stocky case design, measuring 16.5 inches long and just under 11 inches wide to accommodate a dual-chamber design. I do love dual-chamber cases, but it feels like the ROG Strix GA35 didn’t use the space well.

The chambers are the same size, and the back holds the power supply and all the cables, while the front holds all of the sexy RGB components necessary to any modern gaming rig. There are some crazy design choices, though. The all-in-one (AIO) liquid cooler is installed in the back chamber, exhausting air that doesn’t have an intake. It also causes the braided liquid tube to lay awkwardly across the motherboard, which is a trend I saw in the internal layout of the GA35.

Still, airflow isn’t an issue but it would be better. The only included fan is a 92mm exhaust at the rear of the case, and there’s no space for additional fans. As a result, the machine gets a little loud under heavy load, but we’ve heard worse, and it doesn’t get too hot, either.

The exterior of the GA35DX-XH999 looks fantastic, with a bunch of stripes and angles on the front panel with a clickable flap that pops to reveal a clever trick: a sturdy side hook for holding your gaming headset. There’s a ROG logo at the top of the front panel, and below it is an RGB stripe cutting across the low part, which you can change via the Asus software. Both sides are the same dark gray color, with a transparent side panel for showing off the PC’s clean interior.

Also bundled into the package are a ROG Strix Scope gaming keyboard and a ROG Chakram Core gaming keyboard. The monitor, however, is bought separately, we recommend something like the 32-inch BenQ EW3280U 4K gaming monitor

Asus makes some of the best gaming hardware available right now, so I wasn’t surprised by the Strix GA35’s excellent port options. You get a pair of each USB-C and USB 3.0 ports on the front of the case, along with separate headphone and microphone inputs, something you don’t find on pricey machines like the Origin Neuron gaming rig.

Around the back, there is an additional seven USB 3.2 ports, another USB-C port, Gigabit Ethernet, and the standard range of audio connections. Having all these ports is great, but the pair of USB-C ports on the front seal the deal for me.

Storage expansion is fantastic, too. The case includes two hot-swappable SSD bays on the front, as well as an extra slot for a 3.5-inch hard drive in the HDD cage. On the motherboard, there are two M.2 expansion slots – one which is filled from the factory, but you’ll have to work your way around the GPU to access them.

Under the hood, the Asus ROG Strix GA35 packs a 4.8GHz AMD Ryzen 9 5900X processor, 32GB RAM, and a 1TB Hyperdrive SSD + 2TB HDD for storage. This isn’t a lightweight configuration that you can find in even a midrange machine, it’s a preserve for high-end machines like the Strix GA35DX-XH999. A performant machine at every angle, and arrives with Windows 11 Pro pre-installed.

While the AMD Ryzen 9 5900X processor has been around for some time now, compared to the best and brightest from Intel. Still, it’s miles ahead of Intel’s 10th-gen and 11th-gen chips, and its single-core performance is great for gaming. However, the higher core count of the flagship Ryzen 9 5950X and the hybrid architecture of the Intel Core i9-12900K give them an edge over the AMD Ryzen 9 5900X.

For single-core performance, the Ryzen 9 5900X matches the Ryzen 9 5950X in the Origin Neuron, but the latter performs well in multi-core tests, thanks to four extra cores bringing as much as a 15% increase. Outside of pure processor benchmarks, the ROG Strix GA35 performs well on productivity tasks, but the RTX 3090 adds a major uplift when it comes to gaming performance, which is certainly why you’re interested in the ROG Strix GA35.

The Asus ROG Strix GA35 is built for 4K – and it doesn’t disappoint with an Nvidia GeForce RTX 3090 (24GB) under the hood. It runs modern titles at 4K with the highest possible graphics presets at good frame rates. This isn’t surprising, though, considering that this is a machine, with Nvidia’s most powerful card.

You can play modern AAA titles at 4K resolution with RTX at its highest settings, as well as DLSS, and the games will be largely stable at around 60 frames per second (fps) and above.

The ROG Strix GA35 tore through Shadow of the Tomb Raider on its highest settings at both 1080p (154 fps) and 4K (67 fps), easily beating both the Alienware Aurora R14 and HP OMEN 30L. It surpasses the RTX 3080Ti-based iBuyPower Pro, though the gains are more visible in 4K.

The Asus ROG Strix GA35 is a capable, super-fast gaming PC. There’s no doubt about that. There are a few issues, though, mostly centered on the single CPU fan that gets a little loud under load. In most cases, that doesn’t affect gaming performance, and not worse in any case. But they’re present, and you should keep them in mind if you plan on dropping some heavy cash.

Should you buy the Asus ROG Strix GA35?

Yes. With the level of hardware packed into the Asus ROG Strix GA35, you can get some serious gaming performance. This is the machine you buy when you want the absolute best gaming performance and you don’t care about anything else. Not even how much it costs.

The Asus GA35 is one kickass gaming machine stacked with top-of-the-line hardware that delivers unbridled power in gaming and productivity without getting too hot (though. The fan is loud). It arrives in a standard form factor, too, so upgrading the components is possible even if they aren’t always practical.

Alternatives in this range include the Alienware Aurora R14 and Corsair ONE i300, and the Aurora R14 costs about $1,000 less, but again they don’t pack similar components, either. HP’s Omen 30L is also a solid alternative thanks to its high-end hardware and toolless case design.

Overall, if you want an incredibly powerful gaming PC, the Asus ROG Strix GA35 (GA35DX-XH999) is one of the best you can get out there. With an AMD Ryzen 9 5900X and GeForce RTX 3090, this is one of the most powerful gaming rigs for pro gamers and will handle any game at 4K provided you have the money to spend. 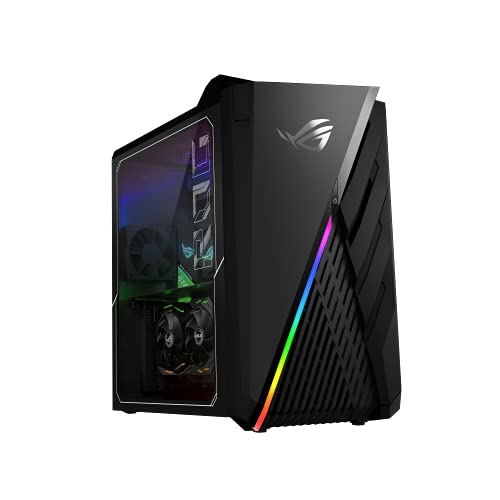