The Asus ROG Strix GA35 (GA35DX-XB999) is an absolute high-end gaming and productivity powerhouse when outfitted with an AMD Ryzen 9 5900X and RTX 3090, but that performance makes the system pricey – in a good way though.

Nvidia’s GeForce RTX 3090 cards are hard to come by right now, but one way to get it is in a prebuilt system. Specifically, we tested it in an Asus ROG Strix GA35 (GA35DX-XB999) gaming PC. To the high-end GPU, add an AMD Ryzen 9 5900X CPU alongside 32GB RAM and the Strix GA35 is nothing short of a tank, blasting through modern titles in 4K resolutions at the highest settings. All these make it one of the best gaming PCs based on raw power alone.

The build may not be as visually flashy as other boutique competitors like the Skytech Prism II or the iBUYPOWER Pro TraceMR 224i, but it will fit right in for office and professional use. For speed hounds with demanding data, content, or 3D workloads, this is among the best custom builds available. All bolstered by AMD’s new day CPUs.

For ‘hardcore’ gamers, the Asus ROG Strix GA35DX provides one way to get the most up-to-date gaming specs in a premium, modern system, but you’ll certainly empty your wallet for it too.

Last month we reviewed the Asus ROG Strix GA15DK, and we liked it for its clean, minimalist design and seamless upgradability. Now, its high-end sibling gets a bigger chassis but the fantastic design makes an appearance here, albeit in a slightly bigger case. That means you get the same dark grey, aggressively angular styling laden with some bit of RGB.

As such, it gets a bunch of stripes and angles on the front panel with a clickable flap that pops to reveal a clever trick: a sturdy side hook for holding your gaming headset. There’s a ROG logo at the top of the front panel, and below it is an RGB stripe cutting across the low part, which you can change via the Asus software.

Both sides are the same dark gray color, with a transparent side panel for showing off the PC’s clean interior. Well, not a very clean interior after all – the all-in-one liquid cooler is installed in the back chamber, exhausting air that doesn’t have an intake. It also causes the braided liquid to lay awkwardly across the motherboard.

Airflow isn’t an issue, but it could have been better, with only a single 92mm exhaust at the back, yet there was space to mount other fans. The machine is a bit lout to my liking, but we’ve seen worse in the high-end gaming category, accompanied by the resource demands of modern titles. Luckily, it doesn’t get too hot, at least we can do with some loud noise during gameplay, machine heat is simply unbearable.

Finally, the ROG Strix GA35 measures ‎11 x 17 x 19.7 inches and weighs 33.1 pounds, much smaller than competing gaming PCs with similar components. Also bundled into the package are a ROG Strix Scope gaming keyboard and a ROG Chakram Core gaming keyboard. The monitor, however, is bought separately, we recommend something like the 32-inch BenQ EW3280U 4K gaming monitor.

Asus makes some of the best gaming hardware available right now, so I wasn’t surprised by the Strix GA35’s excellent port options. You get a pair of each USB-C and USB 3.0 ports on the front of the case, along with separate headphone and microphone inputs, something you don’t find on pricey machines like the Origin Neuron gaming rig.

Around the back, there are an additional seven USB 3.2 ports, another USB-C port, Gigabit Ethernet, and the standard range of audio connections. Having all these ports is great, but the pair of USB-C ports on the front seal the deal for me.

Storage expansion is fantastic, too. The case includes two hot-swappable SSD bays on the front, as well as an extra slot for a 3.5-inch hard drive in the HDD cage. On the motherboard, there are two M.2 expansion slots – one which is filled from the factory, but you’ll have to work your way around the GPU to access them.

Under the hood, the Asus ROG Strix GA35 packs a 4.8GHz AMD Ryzen 5900X processor, 32GB RAM, a 1TB Hyperdrive SSD + 2TB HDD for storage. This isn’t a lightweight configuration that you can find in even a midrange machine, it’s a preserve for high-end machines like the Strix GA35DX. A performant machine at every angle.

While the AMD Ryzen 5900X processor has been around for some time now, compared to the best and brightest from Intel. Still, it’s still leagues ahead of Intel’s 10th-gen and 11th-gen chips, and its single-core performance is great from gaming. However, the higher core count of the flagship Ryzen 9 5950X and the hybrid architecture of the Intel Core i9-12900K give them an edge over the Ryzen 9 5900X.

For single-core performance, the Ryzen 5900X matches the Ryzen 9 5950X in the Origin Neuron, but the latter performs well in multi-core tests, thanks to four extra cores bringing as much as a 15% increase. Outside of pure processor benchmarks, the ROG Strix GA35 performs well on productivity tasks, but the RTX 3090 adds a major uplift when it comes to gaming performance, which is certainly why you’re interested in the GA35DX.

The Asus ROG Strix GA35 is built for 4K – and it doesn’t disappoint with an Nvidia GeForce RTX 3090 (24GB) under the hood. It runs modern titles at 4K with the highest possible graphics presets at good frames rates. This isn’t surprising, though, considering that this is a machine, with Nvidia’s most powerful card.

You can play modern AAA titles at 4K resolution with RTX at its highest settings, as well as DLSS on, and the games will be largely stable around 60 frames per second (fps) and above.

The Strix GA35DX-XB999 tore through Shadow of the Tomb Raider on its highest settings at both 1080p (154 fps) and 4K (67 fps), easily beating both the Maingear Vybe and HP Obelisk. In fact, it surpasses the RTX 3080Ti-based iBuyPower Pro, though the gains are more visible in 4K.

The Asus GA35 is a capable, super-fast gaming PC. There’s no doubt about that. There are a few issues, though, mostly centered on the single CPU fan that gets a little loud under load. In most cases, that doesn’t affect gaming performance, and not worse in any case. But they’re present, and you should keep them in mind if you plan on dropping some heavy cash..

The Asus ROG Strix GA35 is one hell of a badass gaming PC. It packs top-of-the-line hardware that delivers in gaming and productivity without getting too hot (though, the fan can get loud). It sports a standard, yet beautiful form factor, so upgrades are seamless even if they are not always practical with such a high-end feature set.

Both the desktop CPU and flagship GPU look like a hit, put AMD Ryzen at the fore in the conversation for performance hound at this tier, especially those looking for a PC that’s capable of running the latest games at 4K and running professional productivity apps

All these leave little to no room for criticism as far as the GA35DX-XB999 is concerned. Of course, it’s one of the pricey builds around, buy you getting more computer that you pay for. The only area where the Strix GA35 may lose points is that the visual doesn’t scream “Nearly $6000 Gamer!” compared with expensive, flashier offerings from Maingear, CyberPower, iBuypower, Origin, and other boutique PC makers.

Even so, the GA35 may appeal more to your taste aesthetically, as it fits any professional setting, and the performance is unassailable. If you’re in the market for gaming, work on personally more into raw speed and have the money to, the Asus ROG Strix GA35 sits atop the performance build. Just don’t mind the occasional fan noise. 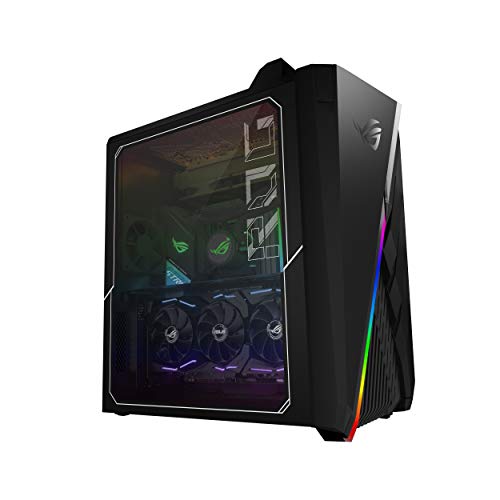