The Asus ROG Strix GL702VM-DB74 is a gaming laptop that uses Nvidia’s latest Pascal-based graphics (GTX 1060) to deliver desktop-level gaming performance. It gives you performance and features that a well relative to what you pay, and it still lets you play demanding games smoothly and can also suffice for media and photo editing projects.

For gamers, Alienware, Schenker, MSI and ASUS are the keynotes as they look for a gaming machine; and they never disappoint. Case in point: ASUS has remained steadfast in the gaming niche with the forward-looking ROG-series, a custom segment specifically cut for gamers. We actually did review two Skylake based predecessors ASUS ROG GL552VW-DH71 (GTX 960M) and ASUS ROG GL502VS-DB71 (GTX 1070) in May and August, respectively.

Since then, we’ve seen new features trickle into the laptop category including the Pascal-based Nvidia GeForce GTX 10-series (1060, 1070 & 1080); and a few weeks ago, Intel dropped a bombshell with the release of its seventh-generation processors ‘codenamed Kaby Lake’ that adds more functionality to its Skylake processors. And now, gaming laptops have become more potent like gaming desktops.

Both models, however, are equipped with a similar feature set including the latest Pascal GPU GTX 1060, sixth-generation Intel Core i7-6700HQ processor (released Q3, 2015) that has four cores and 16GB system memory. That said, in the case of the ASUS ROG Strix GL702VM-DB74, it’s what is inside that really counts.

At a glance, you’ll realize that it isn’t a perfect system, since there isn’t much that distinguishes it from its predecessors. But if I do away with the aesthetic-bias, we have a beast of a machine here that supports G-Sync, is VR Ready and can run visually demanding games at playable rates, even higher than most gaming desktops. If you’re in the market for a new gaming laptop and performance matters, but price doesn’t, you should seriously consider the Strix GL702VM-DB74.

As mentioned, the chassis hasn’t changed from the mentioned predecessors, safe for a bigger 17.3-inch, so we’ll keep it short here and focus on some additions and build quality. Both the aluminum lid and plastic cover on the base still have the metal finish, which might be quick to pick fingerprints and not easy to clean.

Certainly, it has the looks of a gaming laptop thanks to a black ROG metallic profile that has red accents, including the Republic of Gamers logo on its lid. If you need to carry it around, you can slide it into the Bonvince 18.4″ Laptop Backpack, which has nicely placed compartments for the power adapter, mouse and other peripherals.

As expected, a 17-inch gaming laptops had to be huge, measuring about 0.94 by 16.5 by 10.8 inches (HWD), and weighs about 6 pounds. The large, 17.3-inch, 1,920-by-1,080-resolution display is your window to the online and virtual worlds. The metallic lid mimics the hood of a muscle car, and the big, copper hinge and bold vent on the rear complete the powerful, industrial look. Yes, not everyone will love the design, but if you’re in the market for a flashy statement, this is one laptop you should be looking at.

On the GL702VM-DB74, you have roomy and responsive touchpad, but in the process compromised on the keyboard that seems small as a result. Also, I found the keyboard to be located rather up from the laptop where your hands can rest easily. The red-backlit scissor-switch keys themselves feel good for typing with an ideal key separation distance for seamless tactile keystrokes. On the backlit keyboard, the WASD keys are highlighted for easier access when you need them. However, they are not the same keys as you’d find in more expensive USB gaming keyboards.

Connectivity is excellent and varied. The laptop comes with three USB 3.0 ports, one USB 3.1 Type C, an HDMI port, a miniDisplayPort – for hooking up to external monitors, an Ethernet jack, and mic-in, headphone-out, and line-out jacks, as well as an SD card reader. The system also features Bluetooth 4.1 and dual-band 802.11ac Wi-Fi for wireless connectivity, as well as an HD Web camera.

The well-placed vent on the rear are part of a dust-release, thermal cooling system, which works towards keeping the laptop cool as you play demanding games. It uses heart pipes paired with a dual fan system, that cools the CPU and GPU modules independently. The physicals design harbors some gaming enhancements as well.

The system is powered by a 2.6 GHz Intel Quad-Core i7-6700HQ (Turbo to 3.5 GHz) processor. There’s 16GB of memory on board, which can be upgraded all the way to 32GB. The discrete graphics card is the latest Nvidia GeForce GTX1060, 6GB GDDR5 G-SYNC, a pretty powerful GPU that we’ve seen trickle in most recent desktops. Looking at it, this is a serious gaming laptop that cuts no corners. The main purpose of this system is obviously gaming, but it’s perfectly capable of completing some media and photo editing projects.

Previously, we’ve noted that G-Sync technology has an impact on gaming performance, and we attempted testing the laptop with the setting on and off. We noted that it does make games look better and run smoother, but it’s somewhat gets more strenuous on the hardware. As a result, the scores on some games may be generally lower while it’s enabled, but it’s worth it as long as performance doesn’t drop below playable levels.

The 16GB of system memory is upgradable to 32GB via two free DIMM slots. There’s a 1TB hard drive for data storage and a 256GB M.2 solid-state drive for fast booting and loading of your programs. While 256GB is a little tight once you install games on the drive, you can install a SSD via the M.2 slot for more SSD storage. Of course, for a gaming laptop, there isn’t much to write home about.

As expected for a large gaming laptop, the ROG Strix GL702VM-DB74’s battery life is nothing to write home about. The much we got in our testing from the 4-cell battery 3 hours 21 minutes —although Asus claims up to 5 hours; just drop the hype, it’s a gaming laptop. The demanding hardware in gaming laptops generally drains the battery quickly, but that’s still at the lower end of the range. 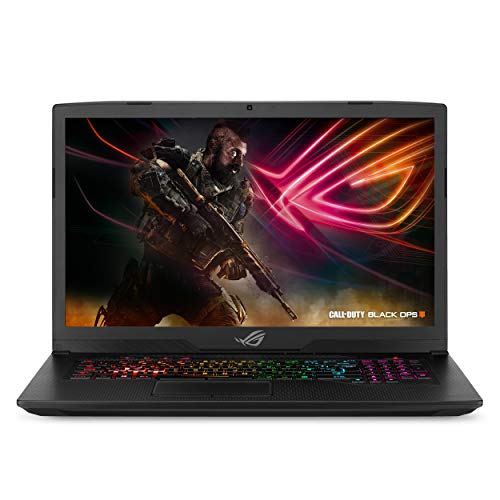 Aside from a quibble about small keyboard for such a large laptop – just like its predecessors, it’s easy to recommend the ASUS ROG Strix GL702VM-DB74 for the dedicated gamer who can afford it. Here you get more than what you pay for, and it’s just hard to argue against performance that rivals what you get from even some latest gaming desktops. It’s also true that there’s not much competition out there—yet. In the coming months, there are sure to be less expensive and thinner laptops with the same –or even better– Pascal graphics cards alongside the latest Kaby Lake processors, as we’ve seen in the 12-inch Razer Blade Stealth.

That said, the newer Asus ROG Strix Scar (GL703GS-DS74) promises even better performance that to forward-looking technologies including: A six-core 8th-Gen Intel Core i7-8750H processor, Nvividia GTX 1070 (8GB) graphics card, a full HD 144Hz IPS screen, 256GB PCIe SSD + 1TB FireCuda Hybrid Drive for storage and, a timeless design. For the Pro-gamers on a budget, here is a system worth having at the top of your very short list.