The ASUS ROG Strix GL702VS-AH73 is a signature statement of what a big-screen laptop should be, when outfitted with a Pascal GPU and Kaby lake processor. For gamers hunting for power and portability, it’s a perfect starting point.

Aside from a few exceptions, gaming laptops are no longer the behemoths they used to be. Technologies like NVidia’s Pascal graphics architecture and Intel’s newer chips are delivering more bang for the buck, bringing more power to unhesitant trim systems. And now, the bar is being pushed a bit far. The ASUS ROG Strix GL702VS-AH73  is one of the first peppy 17-inch laptops with enough raw power, high end components in a surprisingly thin and light chassis.

If you ever wanted a powerful gaming laptop that won’t break your back lugging around, nowhere can you find true value than the latest ROG line of gaming systems. Particularly, the Strix GL702VS that delivers real value with its Intel Core i7 processor and Nvidia GeForce GTX 1070 graphics card.

The GL702VS-AH73 is part of Asus’ Strix line of gaming laptops, comprising of thinner and lighter gaming notebooks. This laptop looks and feels smaller than most 17-inch gaming systems in the market, and you can easily confuse it for a 15-incher, but it packs enough muscle for playing modern games. Its build quality is at par with the standard we’ve come to expect of the ROG Strix line. The keyboard deck is sturdy enough, but gets some flex with intentional force; otherwise it remains strong for rigorous gaming.

On the lid is a Xotic PC skin that accentuates the entire aluminum lid, while the rest of the chassis is made of plastic, but the faux-metal brushing gives it a false metallic look. Amazingly, the faux-metal finish doesn’t pick fingerprints, and won’t keep traces of oily fingers, which is a nice thing to keep the chassis clean. Overall, the aesthetic is tamed from the usual bling and gaily theme of other ROG gaming laptops.

The chiclet-style gaming keyboard with tactile scissor-switch keys is well laid and comfortable to use for long. With 1.6mm key travel, the red-backlit keyboard makes everything snappy, with concise focal pressure points and immediate response. Its predecessor from last year offers better feedback, but the experience is still awesome, with minimal clutter and noise, making it ideal for typing in quiet environments.

The deck has a matte black finish, which blends well with the red lettering on the keys. Below it is a 105mm by 75mm touchpad that sports a false glass finish, but sends accurate gestures to the screen. Still, the experience isn’t as top-notch, something that will make most gamers use a mouse.

On the Strix GL702VS is a 17.3-inch Full HD (1920-by-1080) matte display. With a bigger display, you get wide viewing angles, better color accuracy, and being an IPS panel, visuals are more vibrant than what you’d find on most TN panels used on most gaming notebooks. However, in as much as IPS panels offer a better viewing experience, response time suffers a great deal, which might be an issue on some games.

For that, this system comes with G-Sync technology from Nvidia that serves to synchronize the monitor’s refresh rate with the GPU. As a result, you get improved graphic performance with reduced screen tear. In fact, with a 75Hz refresh rate, gameplay is butter smooth, though some notebooks in the same line are outfitted with 120Hz displays.

The GL702VS has an excellent selection of I/O ports. We’re glad to see a USB Type C port (with Thunderbolt), which is a reasonable inclusion that can be used with high speed external storage devices. In addition to the USB 3.1 port, you get three USB 3.0 ports that you can easily use for VR Headsets since the GTX 1070 graphics card support that feature. If you need to connect on an external display, you can use the Thunderbolt port, or the additional DisplayPort and HDMI port on the left side.

Communication comes via an integrated Ethernet port, and for wireless connectivity you have a dual band 802.11ac Wi-Fi card and Bluetooth 4.1. These network connections are stable enough, meaning you can battle rivals online in a multiplayer setup, transfer files and stream content seamlessly. If you need it more stable, the LAN port comes handy.

Asus’s ROG line of laptops comes in various configurations, with different graphics and storage options. Our review unit, the ASUS ROG Strix GL702VS-AH73 is among the top-tier units in the Series, outfitted with an Intel Core i7-7700HQ Processor, Nvidia GeForce GTX 1070 (8GB) graphics card, 12GB system memory and a hybrid storage option (128GB SSD + 1TB 7200RPM HDD). Having an SSD in this fast gives it a boost in terms of fast booting and enhanced transfer speeds, in addition to the CPU and GPU that promise exceptional performance.

The Kaby Lake chip is becoming common among midrange gaming notebooks, thanks to its baseline features: Hyperthreading, a 6 MB and a 45W TDP. It has a base clock speed of 2.8GHz, but can clock 3.8GHz on a single core, when needed.  Interestingly, the processor is able to achieve its maximum boost whether it’s plugged into a power source or not. This CPU can comfortably handle any task thrown its way, especially applications that require multiple CPU threads.

And now, the main highlight in this notebook: the Nvidia GeForce GTX 1070. This card is based on NVidia’s latest Pascal architecture that focuses on raw power and energy efficiency. With these cards, it’s now possible to have desktop-level performance at laptop-level battery consumption. Plus, its classified as a VR-Ready card, meaning you can render graphics at optimal resolutions and frame rates as required by VR headsets.

With a combo of a powerful CPU and GPU, gaming performance is definitely butter smooth on most AAA games played at native resolutions. The system yields 57 fps on The Witcher 3, 104 fps on Fallout 4 and 109 fps on Doom, all played in ultra-resolutions. 4K gaming is within reach, but the GTX 1070 will definitely stress out.

Gaming laptops are never good with battery life, except for a few. The Strix GL702VS-AH73 belongs to the class of juice-sipping notebooks, with a 76 WHrs battery that will last about 3 hours on a single charge, but can drop to 1 hour 26 minutes when gaming. To be safe, you’ll have to be carrying along your adapter, and have a socket around.

A Thin Profile with a Punch

The ASUS ROG Strix GL702VS-AH73 is a powerful statement of what a big-screen laptop should be, when outfitted with a Pascal GPU and Kaby lake processor. The combo yields a new benchmark for performance in a svelte, 17.3-inch laptop, that doesn’t cut corners. The design is aesthetically sweet, it weighs much less than most 17-inchers, costs fairly less than most GTX 1070 laptops, and plays games at maximum settings seamlessly, above 60 fps, typical of a high-end laptop.

I particularly prefer the restrained styling of the Strix, high quality build and top-tier components used. For all these, it deserves a top spot among our Editors’ Choice for midrange gaming laptops. 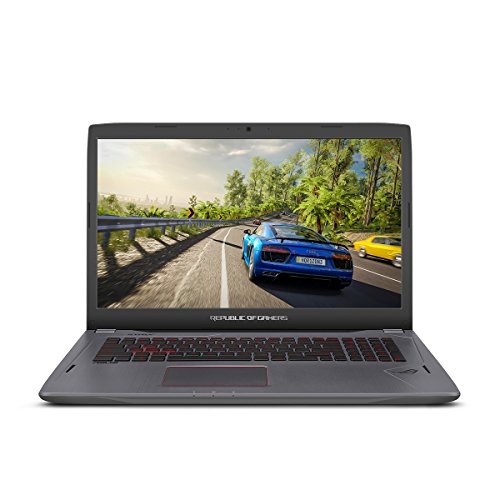