The Asus TUF Dash FX516PM is a masterclass in mixing an accessible price with a gorgeous form factor. It has solid performance in a chassis that won’t weigh you down when you need to carry it along, and it gets one of the longest battery life in a gaming laptop today.

Gaming laptops like the Asus TUF Dash FX516PM, that pack mid-range performance in a thin and light package, have traditionally been much more costly that your usual gaming portable. Typically, if you needed a gaming laptop that could run the latest AAA PC games at high settings, and you wanted the comfort of carrying it around in your backpack, you were looking at shedding a couple grand on it.

However, this year, thanks in large to Intel’s new 11th-generation Tiger Lake-H35 processors, the Asus TUF Dash packs a luxurious gaming experience to a very affordable price point to start.

As expected, Asus had to make a couple of compromises to make this laptop work at its low price, though. The most noticeable is going to be the lack of a webcam. This isn’t the first time we’re seeing this in an Asus gaming laptop either, the Asus TUF Dash 15 (TUF516PE-AB73) from 2021 – still one of our favorite gaming laptops – made this compromise, too. It was a great laptop then, and it’s still great now.

Also, we must highlight that, partly due to its lightweight design, the TUF Dash FX516PM probably won’t be the most powerful RTX 3060-powered gaming laptop on the market – but it is more than powerful to run modern games at a solid framerate.

You can pick the Asus TUF Dash 15 in two colors – black or white – and after seeing both, the black (which we’re reviewing) looks sleek as hell. When opening the Asus TUF Dash 15, you have to do a double take to be sure it’s a TUF product and not an ROG Zephyrus.

For starters, Asus’ TUF lineup of gaming laptops and accessories are aimed at a budget audience that just wants the most bang for their buck. As such, these products take a utilitarian approach in design and performance, but the Dash FX516PM is a masterpiece of both.

This laptop is just 9.1 cm thick, and weighs in at just 2 kgs, which is extremely thin and light for a gaming laptop. Both the keyboard deck and lid are made of aluminum with a beautiful gray colorway, meaning it doesn’t lose rigidity for the sake of portability. The bottom is made of plastic, so don’t think you’re getting a unibody or anything, that’s something still reserved for much more expensive devices.

The display is a Full HD panel, with a 144hz refresh rate, making it a big deal for esports, especially paired with an RTX 3060 GPU. With an average peak brightness of 265 nits and averaging 110% of the sRGB spectrum, the screen is also bright and colorful enough for single-player hits, too.

The bezels surrounding the display aren’t the thinnest we’ve seen around, and definitely not thick enough to distract your gaming experience. Still, we just can’t help but wonder why Asus couldn’t fit a webcam in the top bezel. It’s just thick enough, but it would be one of those cost cutting measures to tame the Asus TUF Dash 15’s price.

A missing webcam is annoying, but it is something you can let go, especially if you’re not looking to use the Dash TUF 15 in video calls or streaming on Twitch. If a webcam is a must have, you’re going to invest in one of the best webcams.

Asus offers good keyboards, overall; and the Dash TUF 15’s keyboard isn’t exceptional. It’s comfy to type on, with plenty of key travel, considering the thin build of the laptop. Individual keys are well spaced, with 4-zone RGB keyboard backlighting. At this price, this is a boon considering that competing laptops lack RGB lighting on the keyboards.

There are some dedicated keys above the keyboard that are genuinely useful. You can control volume without having to awkwardly straddle between the Fn key and the function keys, along with a dedicated mic mute button and one that opens the Asus Armoury Crate software.

Our review unit, the Asus TUF Dash FX516PM packs an Intel Core i7-11370H processor, Nvidia GeForce RTX 3060 graphics card, 8GB RAM and 512GB SSD storage. With these components under the hood, you know the TUF Dash 15 is going to flourish. The only downside is being limited to 8GB of memory from the get-go because doubling that to 16GB would improve the situation tremendously.

For productivity, the Dash 15’s Core i7 chip paired with 8GB of memory deliver a punch on most daily tasks, including MS Office Suite tasks and video creation. It easily loads more than 30 Google Chrome tabs and five 1080p YouTube videos without breaking a sweat. This is excellent for a laptop of this caliber, as you can use it for gaming and some productivity on the side.

With that said, let’s take a look at some of the gaming scenarios for this midrange gaming laptop, especially the RTX 3060 GPU.

Powering the TUF Dash FX516PM’s gaming engine is the Nvidia GeForce RTX 3060 GPU with 6GB of VRAM. So, what does that mean? Well, with such a graphics engine, you can cruise England’s sprawling countryside at over 57 frames per second in Assassin’s Creed Valhalla at Ultra, 1080p settings. And, it means a few other things too.

When it comes to Grand Theft Auto V, the Dash 15 averages 79 fps, still above the mainstream category average of 78 fps, and beyond the Acer Predator Helios 300 (73 fps). However, the Asus TUF Dash F15 (85 fps) does much better.

Gaming laptops have a thing with having short battery life, though we’ve seen notable improvements recently. Most notably, in early 2021, the Asus ROG Zephyrus G14 came out with an AMD Ryzen 7 processor and an RTX 2060, through which we saw an amazing 8 hours of battery life.

The Asus Dash FX516PM is even better, nearing 10 hours of battery life, with an even powerful GPU and a faster 144Ghz display. This means that this gaming laptop should not have absolutely no issue getting you through a full work day. And, if you factor how heavy the charging brick is, being able to bring this thing to work without the brick is a big plus.

Overall – Should you buy the Asus TUF Dash FX516PM?

As far as gaming laptops go, the Asus TUF Dash 15 is one of the better ones in the market at the moment without having too obscene a price tag. These midrange specs will set you back about £1100 – £1300 (or dollars) depending on where it is available on stock at the time of purchase, but buying them in the TUF Dash 15 will save you hundreds of monies, without sacrificing performance. 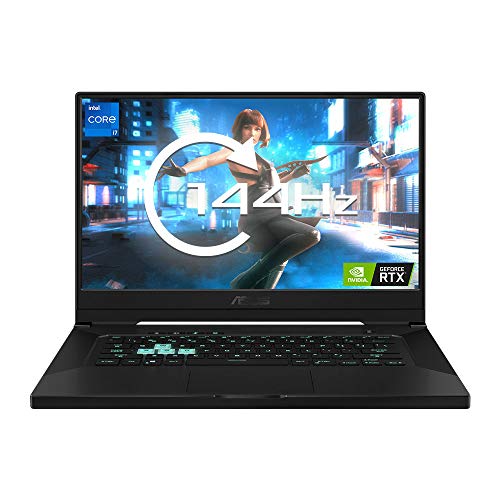 Right now, gaming laptops are the only ways to access Nvidia’s RTX 30 Series cards, and that instantly works in its favor. You can’t really go wrong here, although, with the ability to upgrade to an RTX 3080 or RTX 3090 card, it doesn’t quite have the groundbreaking performance you’d consider class-leading.