The Asus TUF FX504GE-US52 is a budget gaming laptop that has a lot going for it including a high-end ROG design, solid gaming performance and very reasonable pricing.

PC maker Asus has a tradition of releasing durable systems and peripherals, ranging from gaming rigs to productivity components. And now, they have something for entry-level gamers in it’s The Ultimate Force (TUF) motherboard range.

All systems bearing the TUF moniker are designed for enthusiast gamers who desire to own a ‘full-fledged’ Republic of Gamers (ROG) system, but a tight budget doesn’t allow for that. As such, the Asus TUF FX504 Series is a step below the cheapest ROG out here, in both pricing and components. Our review system today is the Asus TUF FX504GE-US52, a 15.6-inch gaming laptop that is billed as an update to last year’s Asus FX503VD- WH51.

All laptops in this year’s FX404 Series can only go up to GTX 1060, while models in last year’s FX503 Series go up to GTX 1060, based on the configuration you choose. However, the sub-$1000 asking price for these models is very attractive and stands to compete with the likes of Lenovo Legion Y720 and Dell’s Inspiron 7577 Series.

The TUF FX504GE looks almost identical to the Asus FX503VD-EH73 except for a few changes on the lid and the palm rest. Instead of a plain design, the new iteration gets a few red flourishes on the outer cover, the same extends to the palm rest as well. Also, the corners are now fairly sharper, giving the system an aggressive, gamer look than its predecessors from last year. That’s just about the only difference that’s separating it from Asus’ other line of gaming laptops.

The case doesn’t pick fingerprints easily and won’t keep traces of oily fingers with regular use. Overall, the system’s Xotic PC skin blends well with the rest of the chassis but stays clear of the usual bling you’d find on most ROG gaming laptops. The keyboard deck is sturdy, has some flex with intentional force; otherwise it remains strong for rigorous gaming.

The Asus FX504GE-US52 TUF’s 15.6-inch full HD display features an In-Plane Switching (IPS) is better compared to the Twisted-Nematic (TN) panel used on the Asus TUF FX504GD-ES51. The only benefit of a TN panels is that they are free of backlight edge bleeding and delivers fast black-to-white response times, when compared to most IPS panel. However, an In-Plane Switching (IPS) panel is preferable over Twisted Nematic (TN) technology, as it offers wider viewing angles and delivers better quality colors.

Some might prefer a 4K display, only that the pricing and GTX 1050 Ti in the Asus FX504GE isn’t muscular enough to deliver butter-smooth gaming on most titles to make them playable at 4K resolution. If 4K resolution is a must-have, you might have to spend slightly more on a GTX 1080 GPU –and a screen to render it. Also, if you need a touchscreen, you’ll have to look elsewhere.

This laptop gets a standard selection of I/O ports, including: three USB ports (two USB 3.0, one USB 2.0), a HDMI port, an Ethernet jack, and mic-in, headphone-out, and line-out jacks, as well as an SD card reader. The system also features Bluetooth 4.1 and dual-band 802.11ac Wi-Fi for wireless connectivity, as well as an HD Web camera.

For the price, we didn’t expect Thunderbolt 3, so its absence isn’t a deal breaker, but the lack of both USB Type C and an SD card reader can be overlooked.

About the best part of the keyboard is that Asus manages to include both a number pad and full-sized directional arrow keys. Not always found on a 15-inch laptop. Below it is a 105mm by 75mm touchpad that sports a false glass finish but sends accurate gestures to the screen. Still, the experience isn’t as top-notch, something that will make most gamers use a mouse.

The is outfitted with a quad-core Intel Core i5-8300H processor, which replaces the same quad-core i5-7300HQ chip from last year. Most will see this as a major upgrade, but the only inclusion in this Coffee Lake-H processor over the i5-7300HQ is Hyper-Threading for 8 threads concurrently. This inclusion puts it in the same league as Intel’s Core i7-7700HQ when it comes to performance benchmarks.

That said, it doesn’t crank things up as the hexa-core Core i7-8750H chip that’s being flaunted on higher-end notebooks like the MSI GV62 8RD-034, GIGABYTE Aero 15X v8-BK4 and the Asus GL703GE-ES73. The newer processor combined with 8GB RAM and 1TB FireCuda SSHD give the system excellent performance, though, it doesn’t exceed any expectations we had of a i5-8300H chip.

GPU performance is at par with other less expensive systems fitted with the mid-range Nvidia GeForce 1050 Ti graphics processor. Also included is Optimus which makes it possible to switch into the integrated UHD Graphics 630 in case you need it.

Even with the new Coffee Lake-H CPU, the GPU’s performance remains standard as it utilizes 4GB of VRAM to accelerate graphics performance, which is at par with most competitors in the same price range. It still manages to play modern titles smoothly, delivering acceptable frame rates on games such as The Witcher 3 (44.6fps) and Rise of the Tomb Raider(41.9fps), all played at high settings.

Gaming laptops are never good with battery life, except for a few. The Asus US52 belongs to the class of juice-sipping notebooks, with a 48 WHrs battery that will last about 3 hours on a single charge but can drop to 1 hour 26 minutes when gaming. To be safe, you’ll have to be carrying along your adapter, and have a socket around.

Personally, I do welcome newer and affordable gaming notebooks for as long as they don’t offer lackluster performance as a way of justifying a few dollars to be saved along the way. In the case of the Asus TUF FX504GE-US52, it sacrifices features like a quality display and reduced battery life, all of which I find unwarranted. For that case, I’d better invest $100 more and get a system like the Asus FX503VD-EH73 that has a true SSD for primary applications and a quality IPS display. And, if I had a gaming notebook with Intel’s Core i5-7300HQ or above, I don’t see any reason to jump into the newer i5-8300H as it doesn’t yield much in playability.

In addition, at just over 0.98-inches in thickness, this laptop isn’t getting much in terms of portability, although it gets a more resilient keyboard and the SSHD on the FX504GD will boost game load speeds as compared to traditional drives. Thus, even if the TUF FX504GE is billed to be more durable and affordable, we’re still debating whether it really needs to be.

For now, the ASUS FX504GE-ES72 and the Dell G5587-5859BLK-PUS are the best alternatives around, unless your budget is very tight. If true, then you can safely consider the Asus FX504GD-ES51 as an affordable gaming laptop. 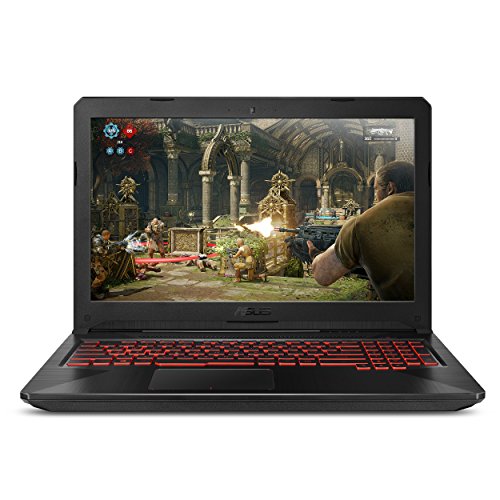