The ASUS TUF FX505DT-AH51 is an entry-level laptop that stretches the definition of budget gaming, offering better 1080p gaming performance, a 120Hz screen and enough real-estate for future upgrades. It may not be the most powerful gaming laptop around, but it does a good jot over competitors.

We’ve sampled Asus’ TUF entry-level gaming laptops twice before, in Sep 2018 and June 2019. Today’s review unit is the Asus TUF FX505DT-AH51, the most affordable TUF gaming laptop yet. The reason? It shifts from its predecessors’ Intel Core i5 power but maintains the Nvidia GeForce graphics:  Both the quad-core Ryzen 5 R5-3550H processor and Nvidia GTX 1650 graphics are standard gaming components.

The result is a 1080p gaming rig that will tempt cash-strapped gamers – it doesn’t necessarily challenge our Editors’ Choice for budget gaming laptops, the MSI GL63 8SC-059, but it can render triple-A titles at close to top visual quality.

The Asus TUF FX505DT sports an angular design, literally, keeping up with the TUF moniker and includes the red color scheme on the keyboard as its predecessors. Unlike the ASUS TUF FX505DY-ES51 we sampled earlier, it doesn’t get red accents on the lid, along the vent grille and keyboard deck. Instead, Asus opted for a uniform black color with a signature ‘ASUS’ logo on the lid.

As with all budget laptops, this on bears an all-plastic construction, which spans the lid, keyboard deck all the way to the touchpad. Lately, most high-end gaming notebooks from the likes of Dell and Gigabyte come with bezel-less displays, but the bezels persist on budget machines. On the TUF FX505DT-AH5, the screen is surrounded by wide, 1-inch sections cut from the same plastic materials used in the rest of the chassis. 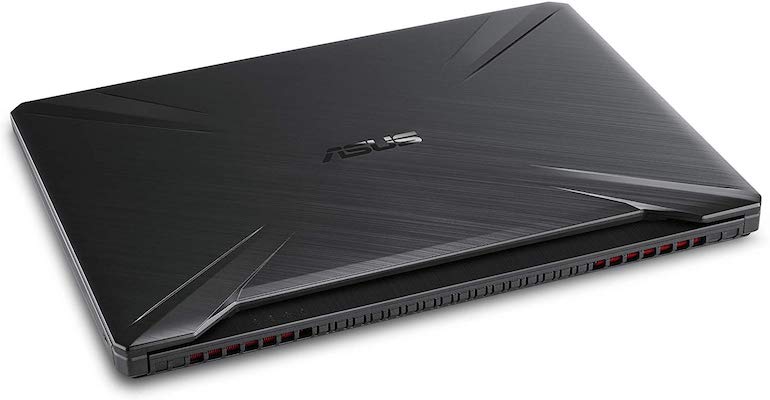 When you decide to play games on a budget, you have to do with a few compromises, and screen quality is always the culprit. Surprisingly, even at the low price, Asus still managed to pack a Full HD (1,920 X 1,080) resolution display, with a 120Hz refresh rate, with the kind of clarity you find on more expensive gaming laptops such as Acer’s Predator Helios 300. Otherwise, we expected a 60Hz screen with a blurry TN panel at this price point.

It does a great job displaying text, pictures look better, but on fast-paced videos we feel like this laptop would do better. We have seen Chromebooks that cost much less out here, but offer excellent color reproduction, more reason we demand a more vibrant display on a gaming system, the price notwithstanding. It covers 66 percent of the sRGB color gamut, which is a far-cry from the 98 percent entry level average. 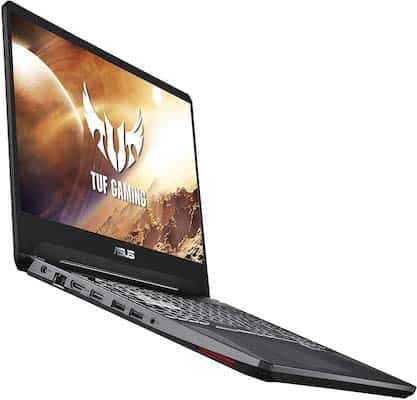 Connectivity comes in way of two USB 3.0 ports, a USB 2.0 ports, HDMI output, Ethernet port, a power jack and a headphone jack, all placed on the left side. The right side only holds a Kensington lock slot. You don’t get a USB Type-C port here, but you can access wireless networks via 802.11ac Wi-Fi and Bluetooth 4.2.

Also missing is an SD card reader, which we can easily overlook, just like we nowadays do with optical drives on laptops. 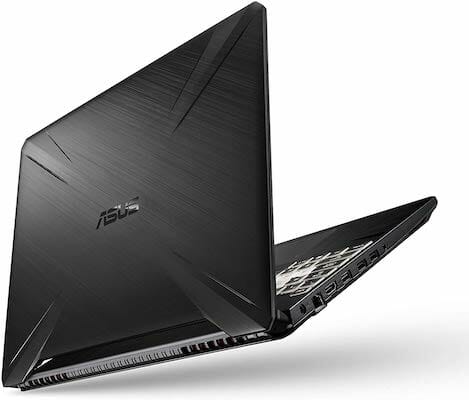 The Asus TUF FX505DT-AH51 offers an RGB backlit keyboard that is as comfortable as it is practical. This chiclet keyboard makes for easy and fast typing, with good key spring back and the keys are well spaced. The WASD keys are outlined in clear white for better visibility, but the spacebar has been modified in a way that the left side protrudes outward, just in case you need more room for your left thumb.

To keep up with other 15-inch gaming laptops, the FX505DT gets a number pad whose keys are notably narrower than those on the rest of the QWERTY layout. On the other hand, the touchpad is small and plain, which is typical of budget laptops. 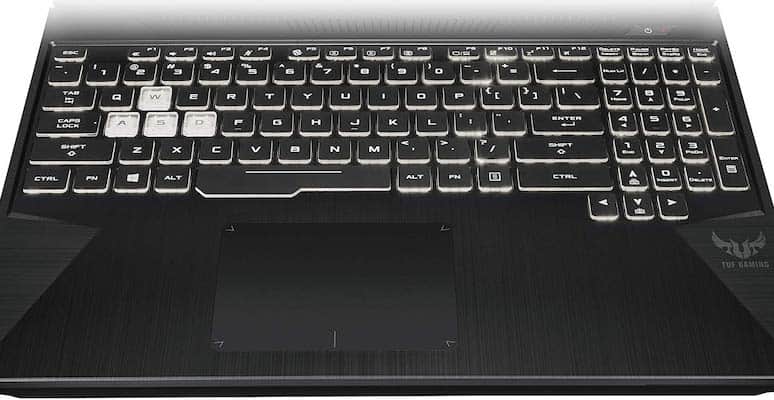 Though billed as a gaming laptop, the Asus FX505DT-AH51 delivers decent productivity performance, thanks to a quad-core AMD Ryzen 5 3550H APU, 8GB RAM and 256GB solid state drive. This Picasso-generation chip has 35 W thermal design power (TDP) clocked at 2.1 GHz spread across its four cores. It uses AMD Turbo Core to achieve a beefier 3.7 GHz on all cores, making it a direct competitor to Intel’s Core i5-8300h CPU, which is found on most office-centric notebooks.

All these components make for a good productivity machine that will let you open around 10 Chrome tabs, stream YouTube videos in the background and maybe keep a few spreadsheets open. If you need more multitasking, you can always throw in more RAM, maybe up to 16GB, but it still works well out of the box with the pre-installed 8GB.

With Nvidia’s GeForce GTX 1650 GPU (4GB) in tow, the TUF FX505DT stands out as a capable gaming laptop, that will let you play modern titles at 1080p and medium settings. The GTX 1650 graphics card is the low-end version of Nvidia’s 2019-released gaming GPUs, hitting the market with the Turing-based RTX 20-Series graphics cards. Unlike its high-end siblings (RTX 2070 & RTX 2080), the GTX 1650 doesn’t include any Raytracing or Tensor cores.

Still, it delivers better performance over last GeForce GTX 1050 Ti graphics cards. Played at medium settings and 1080p resolution, Assassin’s Creed: Odyssey yields at 55 to 62 frames per second, but the same game runs at 53 to 68 fps at medium settings. Of course, you suffer from pixel lose as you move to higher settings, topping out at 48 fps.

At the same settings, Shadow of the Tomb Raider at 1080p at a mix of medium and high settings, the FX505 renders the game at 46 fps. That’s slightly better for an entry-level gaming laptop as it goes above the 37-fps average.

Gaming laptops are never excellent when it comes to battery life, and the Asus TUF FX505DT we’re reviewing isn’t exceptional. Its battery lasts just over 3 hours and 56 minutes under normal use, which includes continuous web browsing, watching videos at 150 nits brightness. That’s slightly below the entry-level gaming average of 4: 38 minutes, whereby the Acer Nitro 5 Spin leads the pack at 7 hours 11 minutes.

The ASUS TUF FX505DT is an entry-level laptop that stretches the definition of budget gaming, offering better 1080p gaming performance, a 120Hz screen and enough real-estate for future upgrades. It may not be the most powerful gaming laptop around, and of course it has its own drawbacks like a middling battery and a plastic construction. But if your budget tops out at around $700, and you want the bigger screen, this TUF FX505DT is a steal.

Among competing budget gaming laptops, the MSI GL63 8SC-059 is a worthwhile alternative. It brings to the decks a brighter screen, its battery lasts a little longer, and the Intel core i7-8750H processor makes for better performance; otherwise the rest of the features remain the same.

Yes. For gamers who want to spend as little money as possible on a gaming laptop but still want to enjoy modern titles at 1080p, the Asus TUF FX505DT-AH51is a definite kill.