The Asus TUF Gaming A15 (FA507RM-ES73, 2022) impresses in most key areas, from a new AMR Ryzen 7 CPU to the RTX 3060 GPU and fast SSD storage, making it an excellent choice if you want a versatile gaming laptop without breaking the bank.

The Asus TUF Gaming A15 is created for the dedicated esports gamer on a tight budget, packing a high-refresh screen, a graphics card that can drive games well, and a good keyboard for fast response times. We’ve reviewed many Gaming A15s before, but the 2020 model (FA507RM-ES73) has received a faster component and a more capable display inside a case that’s much nice looking and lighter than its predecessor from last year.

Compared to other laptops with an RTX 3060 and AMD Ryzen 7 6800H CPU as well as a 300Hz display, the latest TUF Gaming A15 offers incredible value for the buck. Gaming laptops in the $1,000 to $1,500 range often offer a wide array of features, from fantastic screens to superb AAA-game performance, but they seldom have both. Some high-end models like the Alienware X15 R2 lean into both poles, but the midrange TUF A15 leans towards impressive performance.

And while the Asus TUF FA507RM-ES73 is well-built, its features prioritize utility over anything else – aesthetics or luxurious extras.

About the Asus TUF Gaming A15

Our review unit is the latest model in the Asus TUF Gaming A15 series and arrives with AMD’s Ryzen 7 6800H processor, Nvidia GeForce RTX 3060 processor, one of the A15’s higher-end configurations.

Here’s a look at the main specs:

Of the different configurations available, the RTX 3060 version we reviewed provides the best value. Last year, we reviewed the Asus TUF FA506II-AS53 with a GTX 1650 Ti and liked it for the build quality and performance, but the latest iteration takes competition to the doorstep of heavy-hitters like the Acer Predator Helios and Acer Nitro 5 with newer hardware and refined aesthetic.

The Asus TUF range always has this military-inspired design, and the 2022 version keeps that tradition: it has a molded lid that looks like it’s crafted to withstand all the shoves and pushes of daily use, and you’ll find edges with utilitarian air vents alongside numerous TUF logos. Some of us may find the military design immature, but it doesn’t look awful either.

Most of the TUF’s physical connectivity ports are on the left side. It comes with two USB 3.2 Gen 1 Type-C ports with one handling DisplayPort, and the left panel also holds a full-size USB 3.2 Gen 1 port, an HDMI output, and the audio and Ethernet jacks.  That’s decent connectivity, but faster USB ports would be better. On the inside, there’s dual-band Wi-Fi 6 and Bluetooth 5.2, alongside a basic 720p webcam. There isn’t a fingerprint or card reader, however.

With a 15.6-inch body, the FA507RM-ES73 has room for a number pad, and the keyboard has fast response and quiet buttons. They’re good enough for eSports gaming and are firmer than the Acer Nitro 5’s soft keys. That’s not to say the TUF Gaming A15’s keyboard is perfect. The buttons are wobbly and the underlying plastic is soft – for the price, we expected a sturdier feel.

The key layout also needs some work: while you get a number pad and extra audio buttons, you’ll have to do with small cursor keys and a single-height Return button. Also, while it does offer RGB LEDs, it’s got single-zone lighting without much customization.

Below the keyboard is a touchpad that’s large enough, but its buttons are soft and uneven. A USB gaming mouse would be better if you’re gaming casually on this machine.

The display’s peak brightness of 300 nits is good enough to provide good levels of depth and punch, while the contrast ratio offers well-saturated and accurate colors. With 72% NTSC and 3ms response time add to the laptop’s impressive features for both gaming and productivity tasks.

Those are fantastic specs for a midrange gaming machine, and they mean your games will look excellent. The TUF Gaming A15’s panel is comfortably better than the Acer Nitro 5’s screen, which suffers from poor color quality and gamut coverage.

Perhaps the only issue here is the 300 nits level of peak brightness. While that’s fine for indoor use, it’s still not high enough for outdoor use. However, for eSports fans, that’s remedied by 300Hz, which is more than what you’d need for mainstream competitions.

The speakers have a surprising amount of bass and volume, but the top end is fairly tinny. They’re acceptable if you have no other choices, but a headset will be better.

Powering the Asus TUF Gaming A15 is AMD’s new Ryzen 7 6800H, which has eight cores and a peak speed of 4.7GHz. The rest of the specification is reasonable: you get 16GB of dual-channel DDR5 memory and a 512GB SSD with fine everyday read and write speeds of 3,145MB/s and 2,072MB/s.

The TUF A15’s RTX 3060 has a higher power envelope than the same GPU inside the Nitro 5, so it delivers better gaming performance, scoring 49, 217 in 3D Mark Night Raid tests, while the Nitro was almost 10,000 points behind. The same is reflected in real-world gaming, where the A15 maintains the lead in Far Cry New Dawn, with its 1080p Ultra average of 88fps, while the Nitro 5 came at 82 fps on the same game.

At 1080p high settings, the Asus FA507RM-ES73 averages 102 fps on Forza Horizon 5, but it drops to 51fps in Ultra settings. It even runs Cyberpunk 2077 at 1080p with an impressive 68fps, which is great for a gaming laptop at this price range. If you activate ray-tracing and DLSS, gaming gets even smoother and you can even play at higher Ultra settings on select AA games.

This machine will run any single-player game at 1080p, and you’ll have to dial back the quality levels in the toughest titles if you want to hit 60fps averages. This machine comes with extra performance modes, but they’re inconsistent. Turbo mode adds a couple of frames to benchmark results while creating loads of extra noise, so it’s worth using it with a headset.

Finally, Asus delivers surprisingly good battery results with the latest A15. On typical use with brightness reduced to 120 nits, the Asus lasts nine hours and it even cracks eleven hours of video playback. If you decide to push the hardware harder or increase screen brightness, then expect those figures to decline, but you can use this laptop for a full working day in moderation. For gaming, don’t expect anything over three hours, which is typical for most gaming laptops.

Should you buy the Asus TUF Gaming A15?

There’s a lot to like about the latest Asus TUF Gaming A15 for 2022. It elevates the features we liked in last year’s model and easily runs mainstream games on a gorgeous 1080p screen. Its AMD Ryzen 7 processor also offers decent productivity performance, and it even manages to deliver decent battery life in non-gaming situations.

It’s an affordable laptop, though, so don’t expect it to be perfect. Its keyboard is fine for gaming but the trackpad would be better, its build quality and. Build quality is mediocre, and Intel’s 12th Gen processors are faster than the Ryzen 7 6800H if we’re going to nitpick.

Ideally, no laptop is going to be perfect at under $1,500, though, and the A15’s issues aren’t deal-breaking – there’s still enough quality here to handle everyday life and it won’t be the last gaming laptop with a poor trackpad.

All said, the new Asus TUF Gaming A15 (FA507RM-ES73, 2022) impresses in most key areas, from a new AMR Ryzen 7 CPU to the RTX 3060 GPU and fast SSD storage, making it an excellent choice if you want a versatile gaming laptop without breaking the bank. 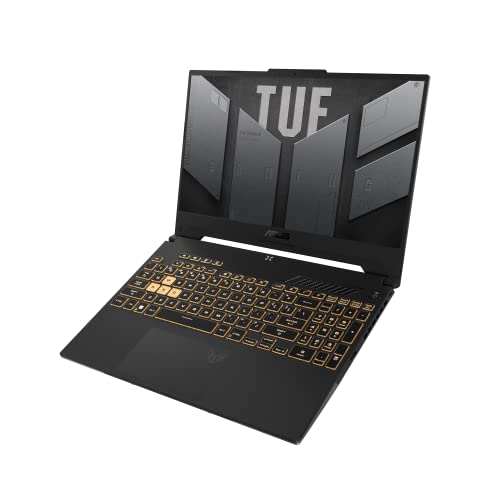