The Asus TUF Gaming F17’s main charm leans heavily on the 17-inch screen quality with an IPS panel capable of reaching a refresh rate of 144Hz, but doesn’t pack a punch to utilize all of that output. As such, most games will run optimally at mid-to-low level video settings, but pro-gamers will be hard pressed to run AAA titles at maximum video settings.

In fact, the Asus TUF Gaming F17 acts more as a gaming desktop than a laptop, especially with its battery life that’s somewhat short, and the 17-inch screen is a bit hectic to tuck inside a small bag. In short, it’s not ideal for gamers on the go, but you have a 15-inch version of the same model – the Asus TUF Gaming F15, but it’s still somewhat portable with a light weight of just 5.73 pounds.

The first thing you notice about the TUF FX706LI-ES53 is how wide it is – 15.71-inches across. That width provides enough room for a full-sized keyboard as well as ample space to fit the 17.3-inch display. Rather surprisingly, it’s not too thick, measuring 0.99-inches tall when closed, which is great if portability is a priority to you. It measures 10.59-inches from the top to the bottom.

While most TUFs are made with a metal chassis, here you have plastic, which is still fine since Asus had to make some tradeoffs to deliver good performance at this price point. Again, some sections have a rough texture with lines and design angles that feel more intentional and professional that just having a purely plastic sheet. We think it’s the plastic that lends to the machine’s light weight profile of 5.73 pounds, certainly ideal for its size.

The screen on the TUF Gaming F17 spans 17.3-inches and offers a refresh rate of 144Hz with a 1920 x 1080 resolution. From the moment you switch it on, images look fantastic; videos, pictures and games all shine. However, viewing the screen from the wrong side will quickly mute the vibrant colors with earthy tones. It covers 45% of the DCI-P3 color gamut and fires up to 284 nits of brightness.

All ports are placed on the sides of the laptop, with none on the back. The power cable plugs into the back left, but a rear port for power and Ethernet would have been more ideal. The left side has the power port, Ethernet port, an HDMI port, two USB type-A ports, a USB Type-C port (G-Sync support) and a 3.5mm audio jack. On the right side, there’s an additional USB Type-A port.

With the large chassis footprint, you have enough room for a full-size keyboard that looks sleek and the keys are responsive, albeit quiet without a tactile response. It doesn’t have dedicated media keys, and most of the alternate functions can be accessed with the help of a FN key. All keys are illuminated with RGB LEDs – particularly the WASD keys with clear keycaps.

The touchpad measures 4.2 inches x 2.4 inches. It responds well to two-finger scrolling and zooming but you’ll definitely want to use a dedicated mouse for gaming. One feature we like is the use of a left/right buttons. Instead of using one piece for both touchpad and buttons, there are three separate components used here to make clearly defined buttons.

When it comes to gaming, the TUF FX706LI-ES53 is a mixed bag. With an Intel Core i5-10300H and Nvidia GeForce GTX 1650 Ti, effectively an entry-level gaming laptop GPU, it’s not the most lethal beast in the kingdom.

The Nvidia GTX 1650 Ti graphics card is the low-end version of Nvidia’s 2019-released gaming GPUs, hitting the market with the Turing-based RTX 20-Series graphics cards. Unlike its high-end siblings (RTX 3070 & RTX 3080), the GTX 1650 Ti doesn’t include any Raytracing or Tensor cores.

Still, it delivers better performance over last year’s GeForce GTX 1050 Ti graphics cards. Played at high settings and 1080p resolution, Far Cry New Dawn yields at 61 frames per second, but the same game runs at 63 fps at medium settings. Of course, you suffer from pixel lose as you move to ultra-settings, topping out at 55 fps.

At the same settings, Hitman 3 at 1080p at a mix of medium and high settings, the TUF Gaming F17 renders the game at 71 fps. That’s slightly better for an entry-level gaming laptop as it goes above the 37-fps average.

With 4 cores and 8 threads and a maximum boost clock of 4.0GHz, this chip easily delivers on both productivity tasks and gaming. To that, add 8GB of memory and 512GB SSD and you have a spirited machine that can handle most (if not all) of your computing needs., may it be media editing or playing the latest games in 1080p.

This is paired with an Nvidia GTX 1650 Ti GPU. Again, this isn’t a flagship GPU (you have the RTX 30 Series), but it’s a capable 1080p performer, making it an excellent choice for this kind of gaming laptop. It’s one of Nvidia’s more affordable GPUs, but it still offers very good performance, and with 4GB DDR6 memory, it makes for a smart choice for a laptop whose cost need to be kept down.

The TUF Gaming F17’s battery life falls short compared to its immediate competitors, lasting only one hour and 48 minutes, when surfing the web continuously over Wi-Fi at 150 nits of brightness. The MSI Pulse GL66 lasts 3:17 while the Acer Predator Helios 300 leads the pack with an incredible 5:18 run time.

The Asus TUF Gaming F17 FX706LI-ES53 looks sleek, though the many angles on throughout the design are perhaps a little too much. The strongest feature on the Asus TUF Gaming F17 remains its screen. It has fantastic image quality, colors are vibrant, and the IPS panel illuminates with warm brightness that’s easy on the eyes, even in a dimly-lit environment.

As tested, the MSI Pulse GL66 and Acer Predator Helios 300 are both stronger performers with higher price tags and smaller screens. the GTX 1650 Ti in the F17 is an entry-level card that can’t play the most demanding titles at the highest settings. 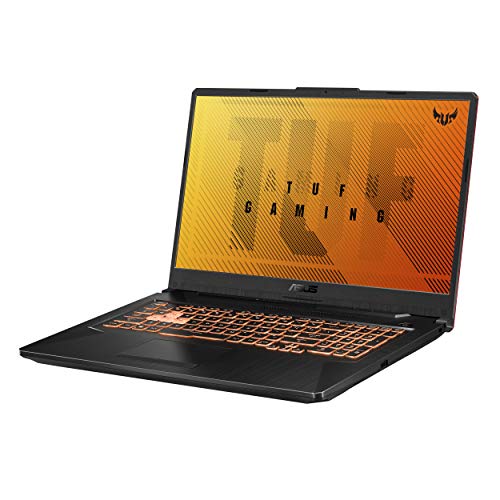