The Asus TUF VG28UQL1AB is a gaming powerhouse and has a price to match. Asus ensures that it packs all the features you would need to game on your PC and PS5/Xbox Series X, including 4K 144Hz, AMD FreeSync and ports for next-gen consoles. 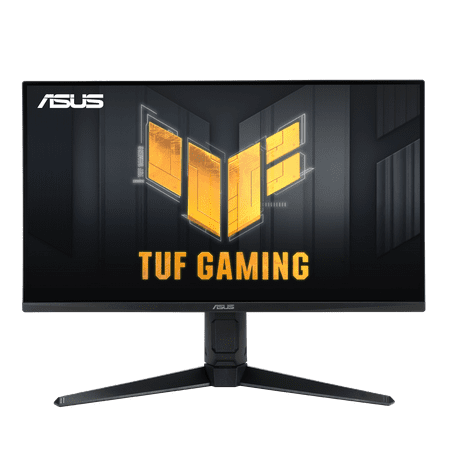 The Asus TUF Gaming VG28UQL1AB is a feature-rich gaming monitor, and an ideal companion to your new PS5 or Xbox Series X. Honestly, at the price of around $700, one should not expect nothing less.

It boasts 4K 144Hz support, four HDMI ports (two are HDMI 2.1 compliant), a splendid IPS panel, lots of image enhancement features (including Dynamic, Dimming, ASCR, etc.), AMD FreeSync and Nvidia G-Sync compatibility and a fully ergonomic design that swiftly moves and swivels in just about every way you want it.

Asus includes HDR support on the VG28UQL1AB (VG28U going forward), but like all other gaming monitors out there, it’s all that useful. It’s DisplayHDR 400 certification, meaning it touches above 400 nits of brightness, but that’s not just enough to benefit from the HDR.

What do you get for the money?

At just over $700, the Asus TUF Gaming VG28UQL1AB isn’t your typical budget gaming monitor. It’s a real investment, but not horrendous considering the specification. The VG28U is a 28in IPS monitor with a maximum resolution of 3,840 x 2,160, a refresh rate of 144Hz, and a response time of 1ms G2G and the aforementioned DisplayHDR 400 certification. For gamers, the VG28 supports AMD FreeSync Premium and Nvidia G-Sync, but the latter isn’t official yet.

If you’ll be using the VG28U with your next-gen console, it also supports variable refresh rate (VRR). This is essentially unbranded adaptive sync technology currently being used on modern TVs to manage screen tearing when gaming on next-gen consoles. Since your PS5/Xbox Series X doesn’t support G-Sync or FreeSync, VRR is a useful feature indeed. Currently, the PS5 doesn’t support VRR, so it will take some time before it can be fully utilized on those sides.

Connectivity on the Asus TUF Gaming VG28UQL1AB is impressive with four HDMI ports on the rear – two HDMI 2.0 and two HDMI 2.1 for 4K/120Hz gaming on next-gen consoles. There’s also a single DP 1.4 port and a two-port USB 3.1 hub as well as a 3.5mm headphone jack. In al2l honesty, I’d rather trade one HDMI port for a USB-C, but clearly this isn’t yet a priority for most gaming monitor manufacturers.

The 28in screen is supported by a sturdy, V-shaped stand that tilts backwards 20 degrees, swivels 30 degrees left/right, pivots 90 degrees clockwise/anticlockwise and raises and lowers the display by 120mm. While these ergonomic adjustments don’t add much in terms of performance, they add comfort to the overall experience. Bundled in the box are an HDMI, DP and USB-A to USB-B cables.

The Asus VG28UQL1AB packs a very decent IPS panel onboard, but that’s not to say it is the best we’ve seen in the market. The panel can produce up to 90% of the DCI-P3 range, but it does fall short slightly of the target in producing accurate colors.

Once again, that’s not to say the colors are awful. Not at all. In Racing color preset, the VG28U is able to produce an almost perfect 6,500K color temperature and around 340 cd/m2 SDR luminance. The contrast also shoots slightly over the quoted 1000:1 mark, which is great for overall brightness and color accuracy.

To the naked eye, the VG28UQL1AB is almost everything you’ve ever dreamt of in a gaming monitor. The colours are mostly well balanced across the range, and the brightness is uniform across the panel.

However, there’s slight blooming in dark scenes from all four corners of the screen, which sometimes interferes with the content you are watching, especially in a dark environment. Luckily, there isn’t major clouding across the panel, so the middle of the screen remains unaffected for the most part. Again, clouding issues vary between panels, so you might have a different experience, altogether.

The TUF VG28UQL1AB’s 1ms GTG response time, along with the 144Hz refresh rate work quite well. Add AMD FreeSync and Nvidia G-Sync compatibility to the mix, and you have a splendid panel that’s able to render games smoothly without noticeable screen tearing.

The panel comes with a number of image enhancing features that will boost the overall gaming experience. They include:

Overclock: This allows you to ‘overclock’ the refresh rate from 120Hz to 144Hz for consoles. While the difference between 120Hz and 144Hz is quite negligible, and we simply doubt if there will be a game that will support 144Hz in the near future, it doesn’t hurt to max it out if you really want to.

Dynamic Dimming: This should remain turned off. Dynamic dimming emulates the features of Local Dimming, but it results in constant and disruptive shift of brightness in every scene.

ELMB Sync: Extreme Low Motion Blur (ELMB) works to further eliminate screen tearing and motion blur, but it takes a hit on overall brightness. You really don’t need it, not with FreeSync and GSync already present.

ASCR: The Asus Smart Contrast Ratio (ASCR) does a good job here. It works by helping the dynamic contrast to 100,000:1 and adjusts the overall brightness of the display based on the content display.

Another thing worth mentioning is that the Asus TUF VG28UQL1AB is certainly designed for used with newer graphics cards. Therefore, with an RTX 30 Series PC, such as the Alienware Aurora R14 (GeForce RTX 3080), issues such as blurred text and intermittent connectivity are eliminated. So, it’s important that you have a newer GPU that can take advantage of all of this monitor’s features, that way, you’ll get maximum performance and value for your money.

Asus TUF Gaming VG28UQL1AB Review: should you buy it?

Truthfully, YES. The Asus TUF Gaming VG28UQL1AB is one of the best gaming monitors in the market. The VG28U is fast, fluid and great looking, and it ticks so many crucial boxes for PS5/Xbox Series X owners, and it’s even better for gamers with the latest GPUs. Simply said, what the VG28UQL1AB offers is an alternative to a $1,000-plus TV, and it caters well to PC gaming enthusiasts.

As priced, the VG28U costs a pretty penny, in fact it costs almost as much as some entry-level gaming machines. If you can sacrifice on the resolution and some of the features, you can easily score a much more 2K monitor for far less. However, if you have the money and need to play with unmatched visual fidelity, then the VG28U is as good as they come.

Overall, the Asus TUF Gaming VG28UQL1AB stands out as an excellent gaming monitor overflowing with features, from 4K 144Hz, FreeSync and GSync compatibility, a super-fast IPS panel and numerous image-oriented features. There’s simply nothing the monitor cannot handle, and for that, it gets our Editors’ Choice award for mid-size 4K gaming monitors. 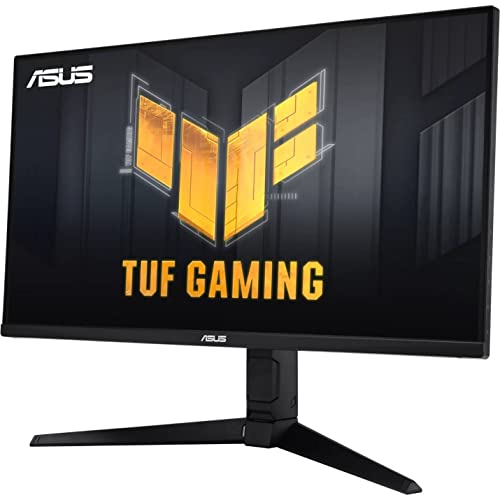