With this laptop, it looks like Asus is targeting folks who are not fans of AMD’s graphics but don’t mind its powerful processor chips instead of Intel’s Core i5/i7 processors that dominate the mobile market. If that describes you, the Asus TUF505DU promises to be a tempting alternative. This gaming laptop leverages a quad-core processor and Nvidia’s new Turing graphics card to power through modern games with ease.

How does this combination of AMD and Nvidia stack up against the popular Intel-Nvidia combos in the market?

If you’re in the market for a slim and light weight laptop, Asus offers the ROG Zephyrus that easily competes with the like of Razer Blade 15, Alienware M15 or the Lenovo Legion Y740, all measuring just over 0.6-inches thin. That’s incredible portability for daily commute, and they pack enough raw power for butter-smooth gameplay. The Asus TUF505DU-EB74 bears the ‘TUF moniker’, meaning you’ll want to look elsewhere if you expect an ultraportable gaming device.

However, it isn’t as boxy and bulky as you’re imagining. Measures 15.6 x 11 x 1.02 inches and weighing 4.85 pounds, Asus manages to deliver a sturdy feeling laptop that feels comfortable to carry around, while not being too heavy. And, not the lightest either.

The main advantage with ‘TUF brand’ machines is that they’ve undergone durability tests, including the military-grade MIL-STD-810G certification, to ensure the laptop is durable, tough and robust.

So, the Asus TUF gaming 505DU-EB74 laptop can withstand daily upheavals including high altitudes, solar radiations and maybe occasional knocks and drops — better than mainstream laptops. About the only cost you’re paying for such protection is an Asus gaming laptop with a somewhat chunky design, and looks a bit dated when compared to more expensive gaming ultrabooks. 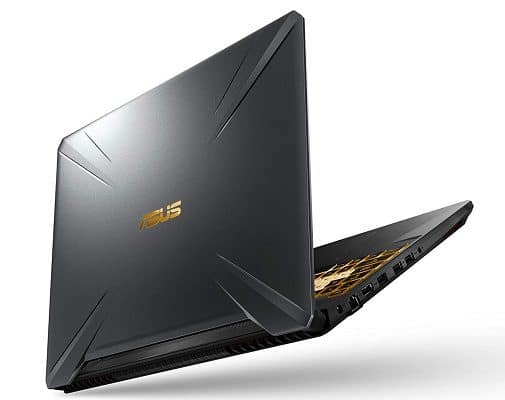 In keeping up with the TUF brand reputation, the Asus TUF505DU-EB74 gives you peace of mind n=knowing your shiny new laptop won’t break easily. Unlike last year’s Asus TUF model — the ASUS TUF FX504GE-US52, the new iteration gets some impressively slim bezels around the screen. Asus call the slim bezels ‘NanoEdge Display’ with left and right bezels measuring just 6.5mm, with a thicker top bezel to accommodate a webcam.

The thin bezels add to the TUF Gaming FX505DU’s reduced dimensions, while at the same time offering a practical screen size with more prominence. This is one of the design areas wherein the TUF Gaming TUF505 feels modern. The screen resolution maxes at Full HD (1920 x 1080), which is becoming standard in the $1000 price range.

Connectivity comes via a USB 2.0 port, two USB 3.1 ports, an Ethernet ports, combo audio jack and HDMI 2.0 port. All these ports are placed along the left-hand side, which is where the power charger is also placed.

It lacks a USB-C port, a shame in 2019, but not too surprising for the bargain price you’re paying. Still, a future-proof Gaming TUF505 for new peripherals. Wireless connectivity comes in way of 802.11b/n/ac Wi-fi and Bluetooth.

The TUF505DU-EB74 keyboard looks like what you find on most desktop-level keyboards, meaning you should expect the kind of quality and comfort you’d get from a desktop PC keyboard. That’s how Asus describes the keyboards used on its TUF lineup.

It takes a bit of convincing, however, but the keyboard isn’t bad for a gaming laptop at this price point. It gets decent sized keys, making it easy for fast typers to hit the correct keys, with Asus promising up to 20 million key presses.

The keys have a 1.8mm key travel, a bit shallow, making the keyboard a bit unresponsive -or satisfying- to type on as you would on a desktop keyboard. Like all gaming laptops, the WASD keys are backlit to help First Person Shooter (FPS) players, but seasoned gamers will not need help finding those essential keys. The standard touchpad is responsive, but you’re better off with a wireless gaming mouse like the SteelSeries Rival 650 Quantum gaming mouse. 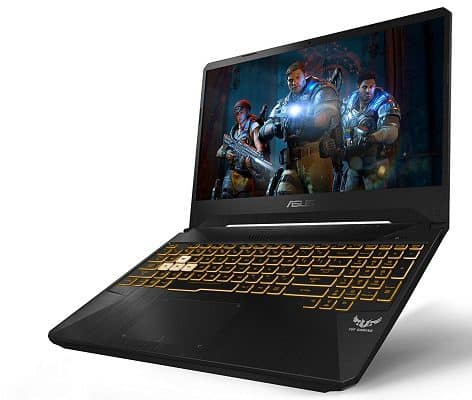 Asus has come out as one of the major promoters of AMD’s chips, with a number of Ryzen-powered gaming machines out here than any other PC manufacturer. The AMD Ryzen 7 3750H processor is paired with 16GB DDR4 RAM and a 256GB PCIe SSD + 1TB hard drive. With the new AMD chip, we are looking at a laptop that’s a lot cheaper than its Intel-toting competitors, with performance that at least comes close to rivalling more expensive laptops.

The Gaming TUF505DU might be that laptop you use for productivity tasks without hesitating to consider the distinct budget sticker price. Compared with other budget gaming alternatives in the same category, like the MSI GL63 8RD-067 and Acer Predator Helios 300 (PH315-51-78NP), the Asus TUF performs like it should. It’s definitely a better choice over expensive laptops performing like budget laptops, and we’ve certainly seen our share of those.

In theory, the GTX 1660 Ti’s position in the hierarchy means that its performance should be close to a GTX equivalent like the GeForce GTX 1070, but well below that of Nvidia’s RTX 2060. The newer GTX 1650 and GTX 1660 Ti are based on Nvidia’s Turing architecture, like the 20-Series GPUs, but they still bear GeForce GTX monikers, like Pascal GPUs.

Why? Because both GTX 1660 Ti and GTX 1650 don’t support the advanced ray-tracing lighting technology or have Tensor core, something you require for the anti-aliasing DLSS feature on most top-tier games. Instead, Nvidia focused on creating a more affordable option that readily offers good performance without these prime features. That justifies the Asus FX505 price, as compared to most laptops in the same category.

The Asus TUF FX505 can play most AAA games play at native 1080p resolution, and do so at impressive frame rates thanks to the GTX 1660 Ti (6GB) graphics card. The 2018 edition of Counter-Strike: Global Offensive, for example, at maximum settings tallies 156 frames per second (FPS) but drops to 129 fps at the more intensive Ultra preset. Other titles affirm the TUF505’s gaming prowess including: Fortnite (126 FPS) and League of Legends (168 FPS) in the same maximum detail settings. In all these games, the system delivers smooth frame rates.

Clearly, with an onboard 1080p display, the Asus TUF505DU-EB74 is a capable mobile gaming laptop. It stacks up well against similarly configured laptops, featuring VR supporting GeForce GTX 1060, but the newer AMD Ryzen 7 processor counts for a lot more. Seeing that the screen has a 120Hz refresh rate, it means that the system can easily deliver better than 72 FPS, giving more reason for the system to come with anything more powerful than this GTX 1660 Ti graphics card.

Gaming laptops rarely impress when it comes to battery life —after all, the powerful gaming components inside need a lot of juice, which reduces battery runtime before you plug it in. With a smaller screen size and low-powered CPU and GPU, we hoped that the Asus TUF Gaming TUF505DU-EB74 would be better in this regard. Sadly, it fails to pin better battery life yielding around 4 hours 31 minutes. We are not surprised, though, as we have reviewed more expensive laptops with worse battery scores.

The Asus TUF505DU-EB74 is a cheap gaming laptop —by gaming standards — that is best suited for online competitive games where high frame rates are more utilized than graphics. Just how much you like it, will depend on your expectations and gaming needs. If you play older games, or games with graphical settings set to low, then you’ll like the inclusion of the 120Hz refresh rate screen. Plus, the rugged ‘TUF’ design makes for a great choice budget laptop you can carry around.

Are there better alternatives?

While the Asus TUF505 scores well in the budget category, it is woefully underpowered for playing modern games with high graphical settings. You’re going to splash out on a more expensive laptop for that.

In which regard you can consider the Razer Blade 15 or the ASUS ROG Strix Scar II (GL504GW-DS74), both with a GeForce RTX 2070 GPU. Another alternative is the Acer Predator Helios 300 (PH315-52-78VL), that packs the same GTX 1660 Ti graphics, but instead of AMD processor, it uses a 9th Generation Intel Core i7-9750H 6-Core Processor. It offers better overall performance, for around the same price.

Otherwise, the TUF505 does some things right, as it should — we like its use of AMD tech as an alternative to Intel, slim bezels, rugged design and low price — if only battery life was perfect too.

Yes and maybe…no! If you’re shopping for a gaming laptop on budget the Asus TUF505DU-EB74 is an easy choice to recommend. Otherwise, you can easily grab one of our alternatives above.

The Asus TUF505DU-EB74 is a cheap gaming laptop —by gaming standards — that is best suited for online competitive games where high frame rates are more utilized than graphics. Just how much you like it, will depend on your expectations and gaming needs. 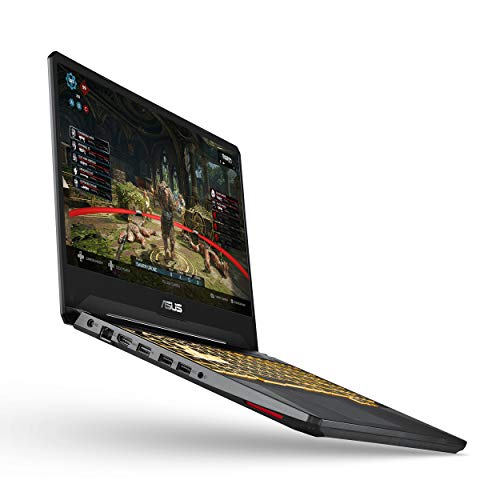