The Asus VivoBook 15 strikes a nice balance between price, its premium design, and its highly portable design while delivering strong all-round performance and good connectivity without being too expensive.

The Asus VivoBook 15 X515EA, just like other lower-priced options from Asus, manages to rock a premium look befitting a notebook twice the price. Following in the Ultraportable footsteps, this quality portable machine keeps most things lightweight and thin, yet powerful enough for most day-to-day tasks and can even do some light photo editing. And, that’s without forcing you to break the piggy bank.

Among the VivoBook 15 X515EA’s noteworthy features are a premium design, minimal screen bezels, and solid performance, thanks to an 11th generation Intel Core i5 processor, 16GB RAM, and 512GB SSD storage, which allows it to hold its own against the competition.

Unfortunately, things begin to fall apart a bit from there; the display is dim and dull and the battery life is lackluster, even for a laptop at this price point. Once again, performance holds up OK for basic web work and productivity tasks, but anything more taxing like intensive media editing or gaming is going to be painfully slow on its Core i5 processor.

15 Inches, but Screen is Subpar

The Asus VivoBook 15 X515 excels at dressing for the job of competing with Acer’s Aspire laptops and the likes. Its silver chassis doesn’t look like a budget laptop, and despite its plastic build and fair lightness – a mere 2.6 kg, slightly heavier than both the Acer Aspire 5 and the HP Pavilion 15 (2.6kg and 1.75kg, respectively) – but it all feels cohesive in its design and construction.

The inside of the Asus VivoBook 15 holds a keyboard fitted to the rest of the laptop body; the same design available on Asus’ premium model. Also, the trackpad is flush on the wrist rest without being an eyesore, and it also gets a fingerprint scanner for locking up the system.

The VivoBook 15 X515EA has a 15.6-inch, 1920 x 1080 NanoEdge display that has a little bezel on either side, but with a bit more at the top to accommodate the webcam. But beyond the widescreen display, the display’s dim color profile and unsettling viewing angles make it an underwhelming device for consuming online videos.

While you can get through YouTube videos without recognizing the display’s middling color quality, it becomes apparent once you switch displays. The viewing angles on this laptop are a bit odd, too. You have to look at the VivoBook 15 at an exact angle – about 100 degrees – to see the contents on the screen without a sheen.

The issue is more prevalent in dark colors, specifically blacks, and grays, and if you rely on dark mode with most apps, it’s just hard to ignore. That makes the laptop hard to use with Windows 11 at night because of the sheen issue.

Keyboard, Ports and the Rest

Asus managed to cleverly fit a full number pad without crowding the keyboard deck, and there’s enough room for comfortably resting your wrist while typing away your work. The keyboard’s chiclet keys are comfortable to type on and have ample backlighting to get work done with the lights down low. As for the trackpad, it would be bigger, as it feels off-enter, at its current position and width.

The VivoBook 15 also gets Asus’ ErgoLift Hinge which adds to the laptop’s overall appeal, as it angles the keyboard and raises it a bit for more comfortable typing when seated on a desk. This is a design feature carried over from some of Asus’ ROG gaming laptops and is meant to increase ergonomics on the go. It’s nice seeing the company implement these features into its lower-tier laptops.

The VivoBook 15 has a decent collection of ports for a laptop that’s quite slim, but I wish it had Thunderbolt 3 input. On the left side, there are two USB 2.0 ports, a microSD card slot, and LED indicators for charging and battery status.

On the right side, there’s a DC jack, a USB 3.1 port, an HDMI port, and a USB Type-C port alongside a headphone/mic combo jack.

The Asus VivoBook 15 X515EA as configured, is on the beefy side for a mid-priced laptop, that offers better performance than competing notebooks, like last year’s Lenovo IdeaPad 3. The 10th Gen Intel Core i5-11135G7 is an 11th generation mobile chip that offers strong performance matched with efficiency, and the 16GB RAM and 512GB SSD storage give it a serious boost over similar machines with the 10th generation processors.

For graphics, you have an Intel UHD graphics card that is quite usable for basic tasks that utilize an integrated card, though itself is not enough to power AAA gaming.

The VivoBook 15 will easily keep up with your demands on day-to-day use. Four cores of computing power are plenty for most tasks, and with headroom to boot clock speeds to 3.6GHz, it can burst as needed. This keeps the laptop feeling snappy, with the SSD launching programs quickly, and some simple tasks, like basic photo editing, working fast.

If you’re looking to buy the Asus Vivobook 15, you’re most likely not too keen about having a laptop with cutting-edge tech – not at this price point. Still, the idea that this laptop has a premium design and has the power to run most of your daily tasks could supersede any shortcomings it might have.

Talking of day-to-use, the VivoBook 15 X515EA in all its worth performs well. As long as you keep your expectations in check and abstain from attempting to run too intensive tasks – such as 3D rendering or playing modern titles – then you should be reasonably happy with the performance of this laptop considering its price.

Most budget laptops can last well over six hours on a single charge, but the VivoBook 15 struggles to hit this mark. It only lasts five hours and 24 minutes through continuous surfing over Wi-Fi at 150 nits of brightness.

The Asus VivoBook 15 strikes a nice balance between price, its premium design, and its highly portable design while delivering strong all-round performance and good connectivity without being too expensive.

The battery life won’t break any records, and the screen would be better and brighter, but it’s still a respectable laptop with 1080p resolution and a capable Intel ‘Tiger Lake’ processor. If I were in a rush and needed a so-called reliable laptop to perform a few quick deeds, this would certainly carry me through.

It has enough power to run day-to-day tasks, it looks beautiful and it doesn’t cost so much. The idea that the Asus VivoBook 15 X515EA packs power to power you through a few years makes this an enticing laptop for work and college. 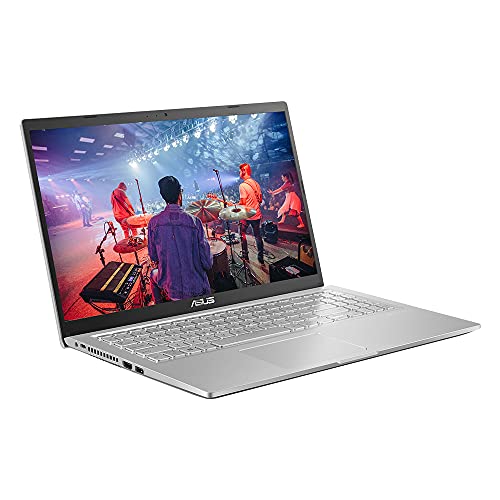