The Asus VivoBook Pro N705UD-EH76 is a capable desktop-replacement laptop with a large screen that makes a statement, thanks to an 8th Gen Core i7 processor and dedicated Nvidia GTX 1050 graphics card.

Flagships don’t have to be big…but they do grow sometimes. Since its debut in late 2016, the Asus VivoBook line has racked up favored reviews with the moniker the world’s smallest 13-inch laptop. With time, it has undergone numerous component upgrades, faced stiff competition from the likes of HP’s Spectre 13 and Dell’s XPS 13, and arguably grown some nerve to grow a longer tooth against the adversaries. Now, it reigns in a 17-inch body for the ASUS VivoBook N705UD-EH76, that dazzles with a stylish design, eighth generation Core i7 performance and a dedicated GTX 1050 graphics card.

The latest VivoBook Pro recaptures the glamour of the original clamshell version with an even trimmer design and star gray finish in a bigger chassis that ultimately combines portability with power. The ‘Pro’ name notwithstanding, Asus has managed to create a robust (albeit on the heavier side of portability) and priced it somewhere in-between what you’d mostly pay for a midrange gaming laptop and a 2-in-1 laptop. Now that it features a gaming-friendly GTX 1050 graphics inside, its more reason to distract yourself from work with a few battles on Fortnite.

The star gray finish of the Pro N705UD-EH76 is recognizable and can’t be easily missed. With a 17.3-inch display, the overall footprint of the VivoBook Pro leans more to the large side of things, but it does look like a 15-incher. Measuring 16.2 x 10 x 0.8 inches with an aluminum construction, this laptop threads carefully on the borderline of portability and durability, weighing 4.6 pounds (2.1kgs).

We expected the 17-inch VivoBook Pro to be on the cusp of being too large for daily commute, but its only a smidge bigger than the VivoBook 15. You’ll not notice a difference between the 15-inch MacBook Pro MR962LL/A (4 pounds) and VivoBook Pro N705UD-EH76 in your backpack when walking around campus.

Competing laptops like the Dell XPS, feature thin screen bezels that make the display appear larger for the body giving the laptops a general refreshed feel to the whole design. The bezels around the VivoBook EH76’s FHD (1,920-by-1,080) screen are slightly thicker, unlike the rest of the VivoBook Series that use the Asus’ Infinity display technology and Dell’s Nano Edge displays used on the XPS Series.

Th benefits of a bigger chassis is that it allows for a roomy keyboard and enough real estate for the palm rest. The keyboard is spacious, comfortable and allows you to type in near silence. The keys provide narrow travel but the overall feel is firm and the clicks are unmuffled. Its plastic keyboard has some flex, especially when typing around the middle but it is sturdy than what you’d find on most 17-inch systems.

The keyboard has backlighting, a feature that is now standard at this price range. For the touchpad, it feels responsive enough although it looks a tad undersized for the expansive palm rest. Like the keys, the touchpad gets soft clicks when pressed. Embedded near the top-right corner of the touchpad is a fingerprint sensor that supports Windows Hello and can be used to unlock the laptop.

For a laptop labeled for pro users, the ASUS VivoBook N705UD-EH76 has an exciting port offering. On the left flank, there is a couple of useful ports including: charging port, RJ Ethernet, USB 3.1, HDMI and the now-popular USB 3.1 port. On the opposite edge, there is a pair of USB 2.0 ports, an SD card reader and a 3.5mm headphone/microphone combo jack.

This is are almost enough ports to extend your screen to external displays, either through HDMI or USB-C, and a plethora of USB ports that give you the flexibility of connecting all your peripherals and backup drives, no matter your setup. 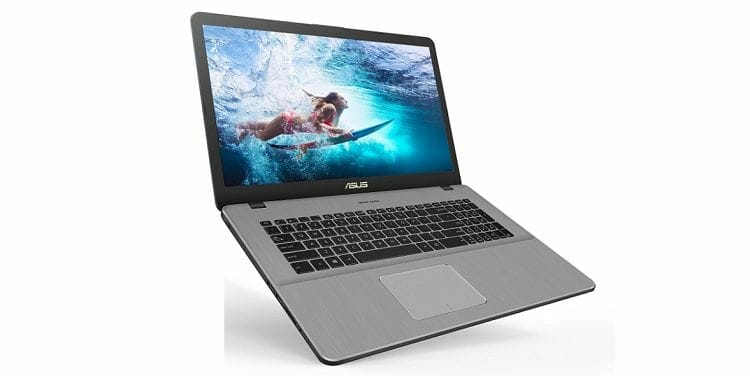 Plenty of other VivoBooks and ultraportables, including the Dell XPS 13 (9370), carry the same Core i7-8550U quad-core CPU and 16GB ram as our model EH76, so its very easy to pick a crop of competitors for benchmark comparison. What stands out is the eighth generation Core i7 processor and Nvidia’s GTX 1050graphics processor, that emphasize that the VivoBook Pro is built for more than spreadsheet creation and enthusiast-level video editing.

As spece’d, this laptop has all it takes to handle your office work and play at the same time. And by play, we mean that its configured with a dedicated graphics card that can be used for gaming. In real-world use, the Coffee Lake processor handles anything you throw at it with ease ranging from spreadsheets, MS Office tasks and image editing (though not at Pro-levels where you might a high-res screen).

For gaming, the VivoBook Pro N705UD-EH76 with its Nvidia GeForce graphics card may not be the fastest machine for play at Ultra settings, but considering the price, it does stand out as a more than capable system. If you need something that has muscle to play the latest games, our Editors’ Choice for midrange gaming laptop, the Acer Predator Helios 300 is a good choice with its GTX 1060 GPU that supports even VR gaming, but the body theme means it can be used at the office.

If you want to save a few dollars and get a larger screen (or need the latest USB-C), the Asus VivoBook Pro N705UD-EH76 remains a first-class desktop replacement buy. And, it is only human to want the latest and greatest, and in the case of the N705UD there are other reasons as well – an even trimmer design, useful port options, Windows Hello support, and the fact that the star gray unit is one of the best office and college laptops you can get.

Granted, you can live with the shorter battery life and not-so-portable construction, just in case you had an ultraportable in mind. If you want to stand out from the crowd and have a larger screen to replace that aging desktop on your worktop, this ASUS VivoBook N705UD-EH76 is an easy Editors’ Choice pick.