The ASUS VivoBook R416SA-EH21 is an inexpensive but fully-fledged Windows laptop with class-leading battery life, a good build quality and design, decent amount of flash storage, and a Full HD screen, all while coming in affordably.

For college, all you need is a competent, nice, and not-too-expensive laptop. Nothing fancy! Unless your budget allows to go for a more expensive ultraportable. The ASUS VivoBook R416SA-EH21 is one of those laptops that comes with a decent-size screen that suffices for schoolwork, enthusiast-level image and video editing, and can allow you surf the Web on the go.

In fact, it s one of the least expensive systems we’ve seen all year round with a full HD display, making it a good choice if you need the extra working room and portability of a budget desktop-replacement laptop. Our Editors’ top pick, the ASUS F556UA-AB32 has a few advantages over the Vivobook R416SA, including a faster Core i3 processor, and more storage, but either would be a good choice for an everyday-use PC.

When closed, the VivoBook R416SA looks stunning in its dark-silver brushed aluminum finish; and the top lid and keyboard deck are covered in the same material giving it a premium feel. On the is a black-colored polycarbonate, which isn’t as cool as the all-metal Acer Chromebook 14, which is the same feel when you buy a car advertised as having leather seats, but in reality they have vinyl on the sides and backs. Still, the system is portable enough just like competing desktop-replacement laptops, measuring 0.7 by 13.3 by 9.3 inches (HWD) and weighing 3.3 pounds.

Its 14-inch LCD non-touch panel affords you a rarely-seen luxury in the budget category, as it boosts a 1,920-by-1,080 (full HD) resolution. Sure, if you don’t mind Chrome OS for Windows 10, the Acer Chromebook 14 has the same Full HD resolution, and so do Windows-based competitors like the HP 14-an013nr and Acer Aspire E 15; while the Acer Aspire ES 15 and HP 15-ba010nr both have screens with a much lower resolution (1,366 by 768). All these make the Vivobook EH21’s screen better if you’re planning on editing website layouts, working on spreadsheets, or watching HD movies at native resolutions.

During testing, the screen was clear and depicted excellent detail, especially when viewed in its sweet spot though the colors showed some wash out when the screen is tilted too far forward or backward. Thankfully, its easy to find a comfortable watching position on the screen.

Asus decided to save a few buck by including a disappointing VGA (640-by-480) resolution webcam, considering that other laptops come with 2-or 5-megapixel cameras. Lately, not everyone uses video conferencing apps like Skype, but it can’t be ruled out among consumers. The stereo speakers produce clear sounds, and are loud enough to fill a small –to medium- size room.

There is a very good assortment of I/O ports squeezed onto the VivoBook’s limited surface area, including one that is rarely seen in budget units. The right side houses a security lock slot, a USB 2.0 port and an SD memory reader. On the left is an HDMI port, a USB 3.0 and USB Type-C ports. It’s not always that you have a Type-C port on a budget laptop, which supports speedy data transfers and charging for compatible Type-C chargers, but it doesn’t support video-out which can be done through the dedicated HDMI out port. None of the competitors we’ve seen so far have a Type-C port, which is a plus for the VivoBook R416SA.

We’d welcome multiple ports (two USB 3.0 ports instead of just one, for example), but it’s still a wide selection for a budget PC. Dual-band 802.11ac Wi-Fi and Bluetooth 4.0 are present for wireless communications—much better than the single-band Wi-Fi found on some inexpensive laptops like the HP 15-ba010nr. It has a chiclet-style non-backlit keyboard, which is a luxury seldom seen at this category. It is, however comfortable to use, though the small size limits the placement of a numeric keypad, as on larger competitors.  The one-piece touchpad is tall and quite responsive.

The ASUS VivoBook R416SA-EH21 has 4GB of memory soldered on the motherboard, along with 128GB of eMMC flash storage. That doesn’t sound like lots of storage for a college student, but its much than what you get from rivals, and the fact that its an SSD its still acceptable, since it’s faster than the spinning hard drives in the ASUS F556UA-AB32 and HP 14-an013nr.

With a 1.6GHz Intel Pentium N3700 quad-core processor (with integrated Intel HD Graphics), the VivoBook R416SA crunches some acceptable numbers on performance tests. It earned a middling score of 1,598 points on the PCMark 8 Work Conventional test, which is at par with rivals. To be sure, we placed it side-by-side with the Core i3 CPU in the ASUS F556UA-AB32  which makes that system faster all around, but the VivoBook is certainly capable of doing everyday tasks in a timely manner. As on all the budget laptops, 3D gaming test scores were low and frame rates in the single digits. Stick to video and regular websites, and you’ll do fine.

Battery life is excellent. The VivoBook R416SA lasted 9 hours 57 minutes, on our rundown tests. That’s good enough to watch movies on a cross-country flight and still have plenty of juice left over for the evening afterward. The class leader is the Acer Aspire Cloudbook (13:59), with the Dell Inspiron 15 (3558) (8:44) significantly behind the VivoBook R416SA. Other desktop-replacement laptops we tested barely broke 5 hours, so the VivoBook R416SA ultimately has exceptional stamina.

The ASUS VivoBook R416SA-EH21 has enough features and performance to shine as an above-average contender among budget desktop-replacement laptops. It boasts all-day battery life, a good build quality and design, generous amount of snappy storage space, and a full HD screen that’s sweet on the eyes.

The larger ASUS F556UA-AB32 remains our Editors’ Top Pick award, however, for having much better performance of a sixth-generation Intel Core i3 processor, a wide, expansive keyboard with numeric keyboard for doing real work, and 1TB hard drive storage, all while coming in affordably. That said, if portability is more important to you than power, keep the VivoBook on your short list. 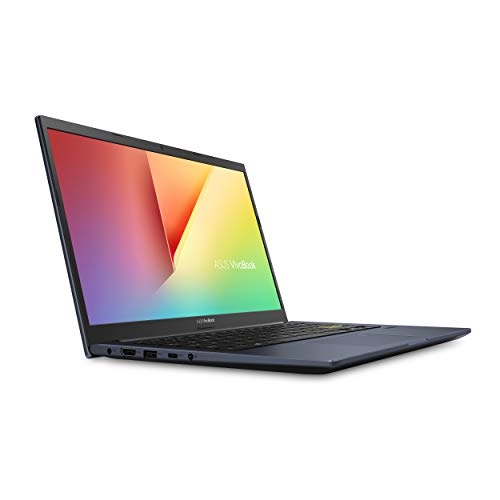