If you’re coming from a traditional notebook, the Asus VivoBook S510UA-DS51 may seem like a clear winner, thanks to its premium design, lightweight profile and a sharp, colorful display.

In the laptop category, 15-inch screens are the most popular, but most are way too heavy to tote around on daily commute. Of course, there are truly portable ultrabooks like the MacBook Pro and Dell’s XPS 15, but they cost well over $1000, which is out of reach for most students and other budget buyers. Enter the Asus VivoBook S (S510UA-DS51), a 15-inch laptop that weighs only 3.7 pounds and rings a reasonable price.

It undercuts rivals in pricing and packs a compelling set of features like a bright, 1080p display, a gorgeous aesthetic, a sleek aluminum lid and speedy solid-state-drive (SSD) storage option. In fact, the VivoBook S has the same narrow-bezel as the one you see on the Dell XPS 15 (Dell calls it Infinity Edge, Asus calls it Nano Edge), a design that packs a 15.6-inch screen into an almost 14-inch form factor.

Even with that, we acknowledge a few drawbacks that include short battery life, a middling keyboard ‘t be ignored just like that, they aren’t serious as to impact on system performance, which is a nice thing.

For that, if you can live with the drawbacks, the VivoBook S510UA-DS51’s premium design and good performance make it a solid choice for students and the casual user.[vc_row]

The VivoBook S510UA-DS51 weighs just 3.7 pounds, noticeably lighter than the XPS 15’s 4 pounds and the HP Notebook 15’s 4.7 pounds. It has a nicely brushed-aluminum lid with a chrome Asus logo at the center, while the plastic keyboard deck, sides and bottom sport the same gold shade.

An IPS full HD (1,920-by-1,080) non-touch screen is perhaps the VivoBook’s best features yet. It has spot-on brightness, colors aren’t saturated, rather look full and rich especially if you decide to adjust them via the supplied Splendid utility which lets you choose from various modes: normal, vivid, eye-care or manually choose the color temperature. The FHD display shows sharp detail at Windows’ default 125-percent zoom out-of-the-box.

If you need a laptop that you can carry around on daily commute, this one is in the cusp of being almost large for easy portability. You’ll definitely feel it in your backpack than you’d do with a MacBook Pro, but is a little less heavy than notebooks, with some little flex if you grasp the screen corners or press the middle of the keyboard. It isn’t flimsy, though. It can easily be carried on one hand, but it will take two hands to open.

On the S510 is a backlit chiclet-style keyboard, that does nothing to impress. It has a shallow, flat typing feel, and the plastic keys have a stiff feedback, which derails from an otherwise awesome layout. That’s for perfection typers, the rest of us will find the keyboard just fine and can get going after an hour’s practice. For excel and spreadsheet jockeys, the lack of a numeric keypad is painful enough, just like on the XPS 15.

There are two bottom mounted speakers that are good enough for daily use and a not-so-good built-in webcam. Even in broad daylight, shots taken at 640-by-480 are excessively grainy, smudged and pixelated.

For a laptop labeled for students and casual users, the S510 does offer excellent connectivity. On the left edge, there are two USB 2.0 ports, alongside an SD card slot. On the right edge. You’ll find one USB 3.0 port, a USB-C (USB 3.1 Gen 1) port, a single HDMI video output and an audio jack. We’re not sure why they didn’t trade the USB 2.0 ports for USB 3.0, but it’s still OK.

A Thunderbolt 3 would make the VivoBook more versatile, but the main causality would be the pricing. As is, there are more than enough ports to connect to up to two external displays, either through HDMI or the USB-C port, and the USB ports are sufficient for accessories and other peripherals, you should be covered no matter the setup.

With its Core i5-8250U CPU, 8GB of RAM and a 256GB solid-state-drive, our review configuration of the Asus VivoBook S510 is more than powerful enough to handle anything thrown its way. It is one of those systems that can have a dozen of tabs open and a video playing on another window, without a hint of lag when switching between tasks.

A few days ago, we reviewed the Asus VivoBook S (S510UN-EH76) – a premium version of this model designed for pro users. The VivoBook sports the same design but has better features like a pair of storage drives (256GB SSD, 1TB HDD) and Nvidia’s GeForce MX150 graphics card.

If your computing needs involve spreadsheets, the lack of a number pad might be limiting. That notwithstanding, the S510 has the muscle to complete MS Office tasks faster than most mainstream notebooks in the same category.

It’s rare to get a value consumer laptop with SSD storage as the primary option, and to see that the VivoBook comes with a 256GB solid-state-drive to run Windows and important apps is impressive and gives you the option to extend the storage via an external drive.

With its integrated Intel UHD 620 GPU, the VivoBook S510UA-DS51 is powerful enough to play casual games and do light video editing, but creative professionals and serious gamers should simply consider a system with a discrete graphics system like the Dell Inspiron i5577-7359BLK-PUS. With intel’s UHD 620 all you’re getting is smooth playability on low-end games like Dirt 3 (46 fps), which is in the same ballpark with most integrated cards.

On battery life, the VivoBook S510UA-DS51 does struggle a little against the Dell XPS, managing just over 3 hours 14 minutes, while the Dell XPS 13 hits 4 hours and 7 minutes. On movie tests, the VivoBook S registers 5 hours 43 minutes, which is almost a day of use. With this, the battery if enough for a movie over a short flight, it might struggle to keep awake on a cross-country flight.

If you’re coming from a traditional notebook, the Asus VivoBook S510UA-DS51 may seem like a clear winner, thanks to its premium design, lightweight profile and a sharp, colorful display. Unfortunately, this gorgeous laptop makes a couple of annoying tradeoffs that compromise the user experience, including short battery life, a shallow keyboard, laggy touchpad and has one of the worst webcams we’ve tested lately.

Yes, it can be had for almost $120 less than the VivoBook base model, but the drawbacks aren’t worth the bucks you’re saving down the road. That said, the Acer Aspire E 15 E5-575G-57D4 offers strong Core i5 performance, a discrete graphics card, the same 256GB SSD and nearly 11 hours of battery life, but it weighs almost 1.3 pounds more and doesn’t looks as nice. For the VivoBook S510, it ably fills its price/performance niche as a light, more stylish, less expensive choice over a swath of 15.6-inch systems. 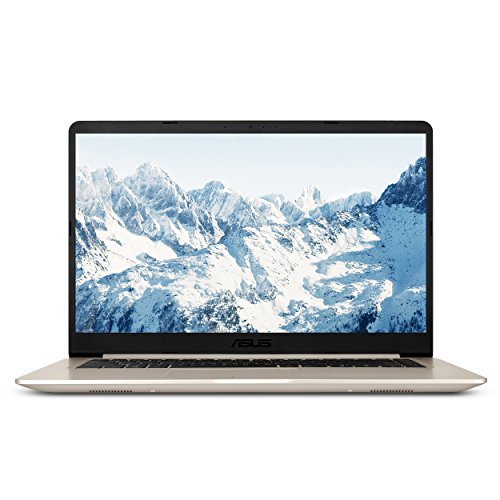