The Asus ZenBook 15 (UX534FTC-AS77) is a great do-it-all laptop that ticks lots of productivity boxes. It combines a Comet Lake processor with a dedicated graphics card to handle anything from work to light gaming, and features one of the best screens on a portable machine.

Much like its predecessors, the Asus ZenBook 15 (UX534FTC-AS77) is a beautiful machine, one that slots in a niche without much competition. It brings back the lovable Screenpad 2.0 in a nicely crafted compact and light 15-inch chassis, and enough muscle to offer solid everyday performance, some gaming abilities and decent battery life at a very competitive price.

The newer ZenBook 15 is as capable in demanding loads as most 15-inch performance-ultraportables (including the Dell XPS 15, Lenovo Thinkpad X1 Extreme, or even Apple’s MacBook Pro), only that it’s a more affordable computer that handles pretty all daily tasks just as well.

For what it’s worth, our review model gets the latest hardware (10th gen Comet Lake Core i7, GTX 1650, UHD screen) that enables it to stand out above other laptops.

Like most ZenBooks, the UX534FTC-AS77 is a gorgeous machine. The Icicle silver chassis lined by Asus’ signature concentric circle pattern exude class and luxury. The Asus logo at the center of the lid look unmatched, just in case you want to compare it with other 15-inch ultrabooks. The metallic lid is cool to the touch, despite being a fingerprint magnet, which you discover once you use the machine for long.

The lid opens to even more of that silver motif. The entirety of the deck is done in silver aluminum, topped up by a gold vent stamped with Asus ZenBook in the center. The keyboard is also silver with black lettering. Right below is an absolutely massive touchpad that doubles as Asus’s proprietary ScreenPad 2.0 (more on that below).

Another feature here is Asus’ proprietary ErgoLift hinge, that raises the keyboard deck ever so slightly, making for a more comfortable typing experience. For one, the raised deck allows for better cooling, hence better performance. And, it also puts some space between the flat surface and the bottom-mounted speakers for better audio.

Now back, bigger and better than ever. Asus managed to finesse its ScreenPad technology, to boast more functionality that its predecessor. Powered by the ScreenXpert software, ScreenPad is created to be enhance the Microsoft Office experience, for better productivity. The LCD touchpad boasts has a resolution of 2160 x 1080 with a refresh rate of 60HZ. It resides on the giant touchpad and to enable or disable it, you simply hit F6.

The 15-inch display is a marvel of engineering and design. Asus managed to pack a gorgeous 15.6-inch, 1920 x 1080 display into a 14-inch chassis. And to make it even better, the laptop gets super-slim bezels. It’s not as slim as the Dell XPS 15’s InfinityEdge bezels, but it’s still very impressive.

The thin bezels and sharp contrast make the display look really good. Watching the 1080p trailer for the Planet Earth, the green scenes look splendid against the blue skies. Details are so sharp that you can see the trees in the cascading landscapes.

Like all other ZenBook 15s, the UX534FTC-AS77 has a snappy, well-spaced and very comfortable keyboard. One thing with 15-inch laptops is that they have enough real estate to accommodate spacious keyboards, and that’s exactly what you get on this ZenBook 15. It’s also satisfying to see that the company added a number pad to the right of the keyboard without eating into any of the main keys, and still had some room to add arrow keys.

The only issue I have with the keyboard is the backlight, that I just hope would shine through the lettering, and help in typing in the dark. It’s just illuminated, and not backlit as we’d expect of such a machine.

The ZenBook UX534FTC has a 5.1 x 2.6-inch touchpad that’s more than spacious to navigate documents and web pages and perform Windows 10 gestures. You can perform pinch-to-zoom, two-finger scroll and three-finger tap without any lag. The bottom corners of the pad deliver springy feedback accompanied by a nice click.

As mentioned earlier, the Asus ZenBook 15 is a high-performing ultraportable laptop. Whatever you’d want to use the laptop for, it will handle it; however, you use the machine, it works and performs. And genuinely, our criticisms are few and far between.

One of them, however, doses reside in the illumination of the keyboard instead of full backlighting, and the screen would be brighter as well. It’s also a bit of a shame that there’s no Ethernet port, but to be fair the Asus UX534 does counter that with very strong and reliable Wi-Fi connectivity and strong Bluetooth 5.0 support, the latter being particularly a solid and welcome addition.

That said, the Asus ZenBook 15 is among the first laptops to get a taste of Intel’s 10th Gen Comet Lake processors – boasting a 1.8GHz Intel Core i7-10510U processor, 16GB RAM and 512GB SSD storage. The 14-nanometer chip, Comet Lake processors are the next class after the 8th Gen Whiskey Lake chips. The new chips are all about enhanced performance, particularly on heavy workloads and multitasking, with over 16% better overall performance than previous-gen chips.

For your projects that need multitasking, the laptop can hold up pretty well. You can launch 30 tabs in Google Chrome, with half of them streaming YouTube or Twitch videos while simultaneously working on a massive spreadsheet in Google Docs. Even with all that, you won’t see any signs of slowing, not even when you start to run formulas.

If you’re looking at playing modern AAA games on the ZenBook 15, the Nvidia GeForce GTX 1650 Max-Q GPU (with 4GB of VRAM) may not be the best shot, but it still is capable of playing albeit at lower resolutions. That’s quite fair considering that this discrete graphics card isn’t cut for heavy gaming, rather a performance boost when it comes to mid-level content creation and multitasking.

Real-world gaming is a mixed-bag of impression, but it still manages 152 frames per second on the Dirt 3 benchmark, which is easily over the 60-fps category average. This is quite impressive considering that competitors like the Spectre x360 manage 61 fps and the Dell XPS 15 produces 80 fps.

Two screens are better than one, but the real hustle comes down to battery life. The Asus ZenBook 15 lasts just over 8 hours 36 minutes, with the ScreenPad 2.0 turned off. That’s remarkably better than last year’s ZenBook Pro that only lasted 5 hours 13 minutes, but it should be noted our review model only has a 1080p panel, as compared with the Pro’s 4K display.

The Asus ZenBook 15 isn’t a reinvention of our favorite ultraportable laptop, but rather a story of making a couple of tweaks here and there and refining what was already a great laptop. The new model maintains the glamour and allure of its predecessor, but adds MIL-SPEC durability and newer components to the mix. Notably, the keyboard now sports a number pad and bezels around it are noticeably smaller, and battery life is now nearly twice as long.

Of all, the biggest addition is its Intel Comet Lake processor, a chip that’s powerful enough for multitasking, only that it doesn’t match the Core i9 processors you find inside the Dell XPS 15 and the 16-inch MacBook Pro. Those machines from Dell and Apple also benefit from brighter displays, while the pricier MacBook Pro lasts longer on a single charge. 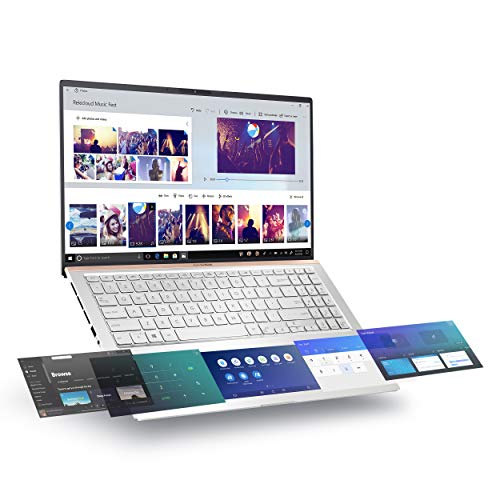 And for the price, the Asus ZenBook 15 (UX534FTC-AS77) has a lot of wins going for it, with the ScreenPad 2.0 being the biggest of all – in fact, it’s something Asus are trying to prove is more useful than just a marketing gimmick.

Overall, given the sleek design and premium feel paired with long battery life, the ZenBook Stands out as an excellent choice for mobile professionals who want to get the best out of their notebook.